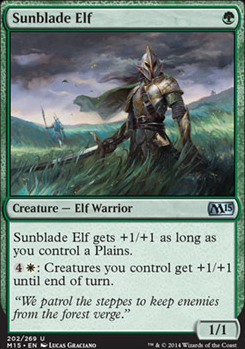 Sunblade Elf gets +1/+1 as long as you control a Plains. 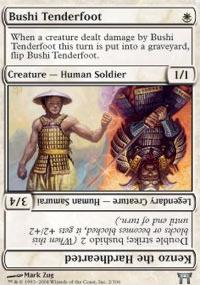 Too Many Freakin Elves, Guys.
by ajackson20 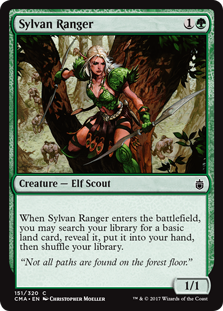 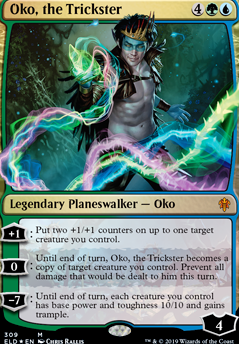 I'd consider either the desserts (Shefet Dunes, Hashep Oasis) since they can make colored and colorless mana, or some utility lands like Field of Ruin and Mutavault. You'll need to mess around to figure out what you like best (I'd try to include field of ruin since you really need to slow combo decks down in order to have a chance), and remember that Zirda reduces land activated abilities too.

As for what to take out, I'd try 1 Blossoming Defense, 1 Sunblade Elf, and 1 Fleecemane Lion for 3 displacer, but I haven't played the deck and you'll need to test. Keep in mind that your mana is going to be less consistent because of the format switch and added colorless, so Sunblade and Fleecemane are going to be less consistent turn 1 and 2 plays.

I'm always glad to see another person join the growing ranks of the Selesnya.

The first thing I would say about the deck is try to make it as consistent as possible. This is normally done by running as many as possible of the better cards. I understand this is probably because of the fact that you have just started so your collection is limited but it might be something to keep in mind as you progress. The opposite is true with populate cards, with big tokens they make a big impact and with small tokens they do not do much.

Next decide fully what direction you want to take the deck. What are your win conditions and how are you going to obtain them? The two classics for tokens in this colour are either: Flooding the board with lots of smaller tokens or cheaply duplicating bigger tokens. This should help you identify which cards to cut. For example Tolsimir is brilliant when running lots of smaller tokens but his benifit is not doing as much if you are playing bigger creatures.

As for a side board it is a reactionary selection of cards. so really you need to think who you are playing against and what cards would combat their decks. For example i would say that authority of the consuls is more of a side board card, as even though it is brilliant against some decks it can be a bit of a waste against others. When I started (and i started with a low to the ground token elf deck) I did not worry about a side board because it is more for competitive play.

some other ideas from my first deck: I love the cards Wilt-Leaf Liege Sunblade Elf These are very good for swarming the board.

Wall of Roots is a perfect card for a big stompy deck giving you protection early game and mana to cast your bigger cards early.

I would also put some form of flying defence in the deck (or even the side board). Sandwurm Convergence can be a good one (although the mana cost is steep) I,m sorry for prattling on so much, I hope I helped. Any questions id be happy to answer.

Nice deck! As a Selesnya fan myself, I agree with your metagame thoughts. As far as your deck goes, few things:

I would actually prefer having Dryad Militant in the maindeck over Loam Lion. The Lion doesn't benefit from the bonus that Wilt-Leaf Liege provides and Dryad Militant can be a real pain for decks that rely on their graveyard (ex. Snapcaster Mage).

Sunblade Elf isn't a terrible choice, but I would prefer his spot be given to a creature that can help you speed up the game a little. Green doesn't provide much of a flying presence so having a creature like Birds of Paradise I feel takes care of 2 issues: it allows you a flying presence on the battlefield to deal with threats you wouldn't normally be able to deal with, and it also allows you to slap a Rancor on it for a nice attacking option as well (aside from providing me mana of any color!). This comes in handy more than you think, and having a turn 2 Loxodon Smiter can really turn the tide in your favor early on.

Also Voice of Resurgence is a fantastic card and I would highly recommend it, especially over a placeholder like Watchwolf. I'd also recommend playtesting with a Gavony Township.

That's all I'll say for now, as any more comments will have your deck looking exactly like mine, haha.

I think your deck would benefit from a few more 1-drops like Narnam Renegade or Sunblade Elf to help ensure you can use all your mana efficiently in the first few turns. Metallic Mimic is always good in aggressive tribal decks too.

If you're looking for more help, you could try posting your deck in the Advertise Your Tribal Deck thread.