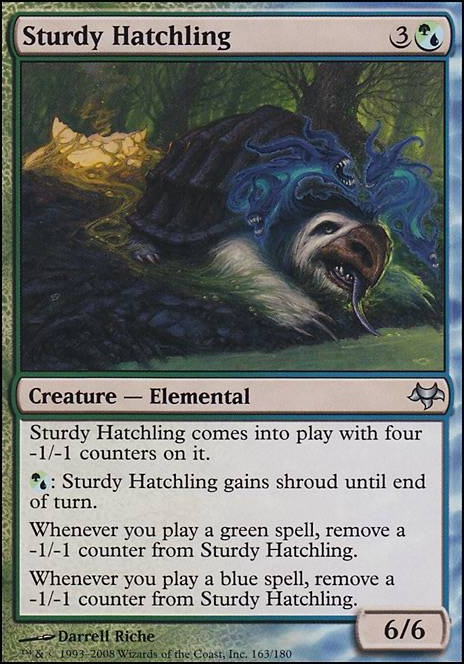 Sturdy Hatchling enters the battlefield with four -1/-1 counters on it.

Whenever you cast a green spell, remove a -1/-1 counter from Sturdy Hatchling.

Whenever you cast a blue spell, remove a -1/-1 counter from Sturdy Hatchling.

Fast and slippery
by Zir 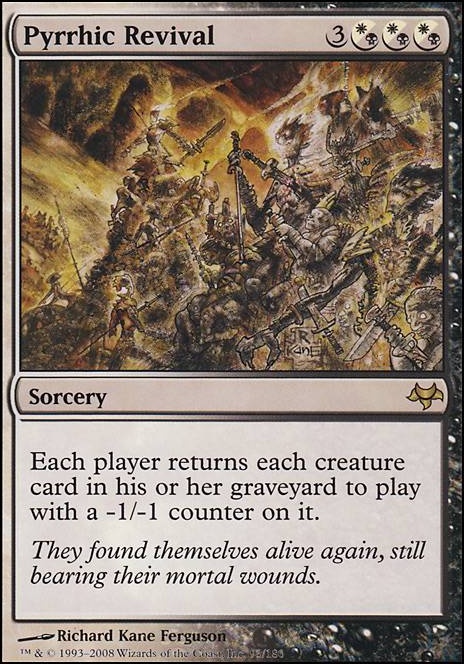 The mimic/hatchling cycles from eventide are fun to build around (Shorecrasher Mimic/Sturdy Hatchling)... My other suggestion is tribal decks like treefolk and illusions ECT ECT.

Have you have been in magic deck building limbo for awhile? Yknow that desire to build something new but dont exactly wanna net-deck nor have a very big budget? Well i have come across a card cycle that i have fallen in love with that i recommend checking out! The mimic/hatchling cycles from Eventide!

They are very easy to build around with lost of support given from Guildpact/Dissension/Return to Ravinca/Dragon Maze/Shadowmoor/Eventide sets because in these particular sets i noticed the use of the Hybrid mana in spells were quite abundant however; keep in mind that run of the mill multicolored spells also work as triggers.

I have built decks around Shorecrasher Mimic/Sturdy Hatchling and Riverfall Mimic/Shrewd Hatchling and find them both to be an absolute blast! Blood Moon is somthing i suggest as well if using /. With a bit of Digging on Gatherer searching the card lists of some of the sets i have suggested (or others) is pretty fun and easy to create a new semi-competitive yet budget friendly deck to play with in a casual environment.

Good luck out there and happy brewing!

I think you could do better than the current mana ramp theme you have. I mean Leigh in tapping dudes is ok but most of you have a lot of mana dorks and only 11 instants. So that doesn't drop much for you. And since most of your creatures are single colored he only gives them +1/+1. Also I don't think you should even bother dreaming about playing world spine worm. Slagwurm is a bit hard at 7 let alone 11.

I'd suggest going with a more tempo oriented build.

T1 is Birds of Paradise or maybe a few other mana dorks. T2 You play with soft counters in blue like Remand and Mana Leak to stop posing T2 threats like goyf and such.

T3 you drop serious threats or you play minor ones with counter spell backup. Goyf is great but pricy. Cards like Kalonian Tusker or Avatar of the Resolute work as great efficient beaters. You could also go with Icefeather Aven to come in with evasion.

Cards like Simic Charm provide you with lots of versatility.

Since you are a bit slower and probably will have a few mana ramp cards. Things like Sturdy Hatchling are easily protectable beaters.

There are more controlling options like Mystic Snake and Venser, Shaper Savant

Or more aggressive cards like Vaporkin variants backed up with versitile pumps like Vines of Vastwood and the aforementioned charm.

Sagu Mauler can be a strong resilient late game card but there are probably better options.

The exact cards I mention are mostly rough suggestions. I didn't have time to look up the best cards for every scenario I listed but I think you get the point.

Nice deck, Vorel is pretty sweet! If you want, feel free to check out my Vorel deck, The Thirteenth Year.

To increase the number of counters you place on things, check out Illusionist's Bracers, Hardened Scales, Solidarity of Heroes, Forgotten Ancient, Bloodspore Thrinax, and Death's Presence.

I also would recommend Nature's Will over the Pygmy Hippo you currently have in the deck, since Nature's Will triggers if any of your creatures deal combat damage to a player.

I would recommend taking out Sturdy Hatchling, since you don't want to double the -1/-1 counters on it. Also, Private Research isn't useful, since the counters are put on the Aura, not on the creature, so Vorel can't double them.

I might also recommend omitting Simic Guildmage unless you have a lot more Auras in your deck, and you don't need Kavu Predator unless your play group has a lot of lifegain. Yisan Chord is a tricky card to use with Vorel, since you want to make sure you don't double his verse counters beyond the CMC of creatures in your deck. Since your highest CMC is 6, I'd recommend cutting him.