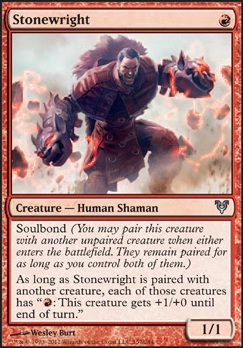 Soulbond As long as Stonewright is paired with another creature, each of those creatures has "{R}: This creature gets +1/+0 until end of turn."

Haktos Runs at the Other Dude
by Lein

Palladia the Dragon Mother
by manbearpig01 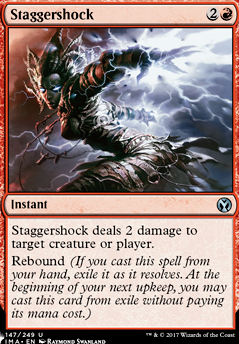 Here are some suggestions off the top of my head. You are at 63 cards. And I'm fairly sure we've had the 60 card discussion before. :D

Consider the following changes:
-1 Bomber Corps
-1 Lightning Strike
-1 Thunderous Wrath
That drops you to 60 without any major changes to the the deck.

Here are some other cards I want you to consider:
Crash Through and Faithless Looting for card draw.
You are going to need a sideboard for more competitive environments. And the sideboard also works for testing maybe cards. Take a look at Legion Loyalist, Stonewright, Tormod's Crypt, Electrostatic Bolt, Smelt, Shattering Spree, Shattering Blow, Monastery Swiftspear, Skullcrack, Collateral Damage, Barrage of Expendables, Pyrite Spellbomb and Searing Blood as either main or sideboard cards.

Sideboard suggestion:
3 Tormod's Crypt
3 Smelt
2 Searing Blood
2 Slagstorm
2 Shattering Blow
3 ???, not sure on this one.

As an avid edh Wort, the Raidmother featuring the combo Of Kiki-Jiki, Mirror Breaker, and Lightning Crafter and shaman stuff, I like jund/gruul as much as i love grixis, always looking for new ways to play the colors in modern and edh, this deck gets my vote

Its subtly powerful and original, and well built

In the event blue is a threat in modern again,id recommend 1 or 2 Vexing Shusher to counterproof spells, also Burning-Tree Shaman could see sideboard play

My first modern brew was red goblins, and if you ever get enough store credit to buy a few, id recommend 2-3 Cavern of Souls mainboard for another Stomping Ground type of land that hoses blue

Besides other non budget things such as Wooded Foothills and Aether Vial cant think of anything else,

First, let me start with I think you have some cool ideas going here. I like your angel theme.Is this meant to be a casual or competitive deck? If you're playing this deck as a casual "have fun with" deck, then great. If you are looking at making this more competitive, then we need to drop your mana curve, focus on more beatdown and get more removal.

I agree with chaosumbreon87. Drop the green completely as it isn't doing much for you except making your mana base more difficult to manage and opening you up to some crappy draws. Making the deck red/white cleans up quite a bit and should smooth out your draws from one game to the next. For competitive you'll need more removal. Condemn, Cavern of Souls, Lightning Helix, and Path to Exile are all good choices.

Now for the cards. Thundersong Trumpeter and Gideon's Lawkeeper are really weak "tap that dude" creatures that just don't provide enough use to really be effective. They don't have haste so you can't use them as anything other than blockers on the turn they enter the battlefield.

I would replace the two Glory of Warfare for two Spear of Heliod. The ++ bonus applies to all of your creatures all of the time and you get an additional removal effect as well.

I use Weathered Wayfarer for mana fixing and accelleration in my angel deck. I'll post my casual angel deck build here in the next day or so.

As for your sideboard. I would add a least one more Leyline of Sanctity. I think 4 Runed Halo is too many. Maybe two or three. Consider Vandalblast, Disenchant, Oblivion Ring and some other artifact and enchantment removal spells.

I'll just list all the mono-red Humans I think are relevant: