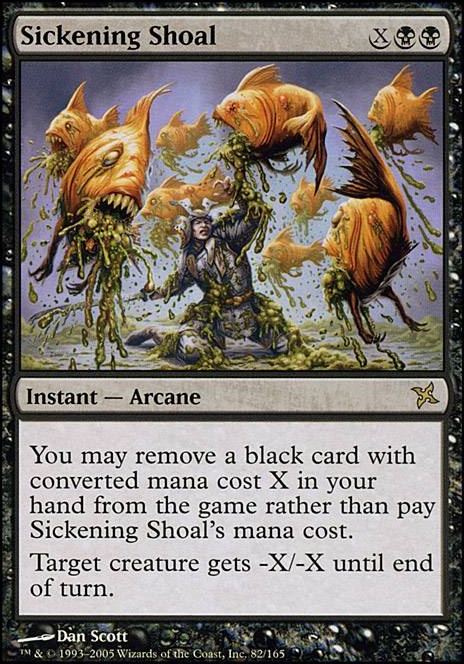 You may exile a black card with converted mana cost X from your hand rather than pay Sickening Shoal's mana cost.

Target creature gets -X/-X until end of turn.

Once you go Black, you'll never go back.
by Dr.Crust

X gone give it to ya
by TheFixer

I personally don't like Avatar of Woe , Endbringer , or Oona, Queen of the Fae . Their Mana costs are way too high and so easy to remove. I personally don't they'll do you much good. The main reason why is because I like to keep my average comvererted Mana cost pretty low. If any of these, I'd run Endbringer but he specifically cost a diamond Mana. That's not just any Mana. That will be hard to cast a lot of the time unless you have a solid ring out which is definitely not every game.

I'd never run Avatar of Woe simply because there's so many cheap or 0 cost targeted removal spells. Time after Time, you'll cast her and she'll be removed. That's a turn wasted. I'd rather run more efficient forms of removal: Snuff Out , Sickening Shoal , Vendetta , Reality Shift , and Rapid Hybridization .

I've thought about this idea myself. The problem I keep thinking of is how to display effects that don't really have a physical representation, like Curiosity or Blackmail. Also, something like Sickening Shoal or Dismember would get pretty graphic.

It's a fun idea, and a computer with enough memory and processing power might be developed in the next few decades, but the execution would take as much work as anything else.

Hey hkhssweiss, much thanks for the input! :)

I totally forgot that Vona's Hunger existed! :)) I'll have to watch how quickly I can get to 10 permanents.

I think I can try running Dismember; the -5/-5 is significant, compared to Sickening Shoal which might end up becoming a pitched Last Gasp most of the time. That one mana to pay can be a steep cost on when the game is down to the wire, but it lets me hit Atraxa, Edgar, and the like.

As for Extraplanar Lens, I'm actually going back and forth with it and Crypt Ghast, hence I haven't unsleeved my Snow-Covered Swamp.

Extraplanar Lens gets me two-for-oned in my meta, even when I use it as a Bubbling Muck. I also have trouble making the most out of it because I run a lot of nonbasic lands. Crypt Ghast dies to the Pox effects and other removal spells but it gives me Extort and at least I don't lose a land when they respond to it. I used to run Nirkana Revenant too, along with Caged Sun but it was too high on the curve, so they got cut out.

I do want to run Contamination so that I have 2 functional copies of Infernal Darkness, but I don't have the creature support for it.

Sadistic Sacrament was once part of the deck, but I ended up being able to regularly pay for the Kicker cost, which made me rather unpopular. I switched to Praetor's Grasp and added multicolor mana rocks so it can also act as an "off-color" tutor. However, I do still bring it out when I'm playing in a cutthroat environment.

Our permanents are sacrifice-able so, can be destroyed by cards that don't target the player like Cataclysm Braids, Cabal Minion, Crack the Earth, a suspended Curse of the Cabal or Living End, or Keldon Twilight.

It seems that the Phyrexian Revokers can be killed with Outbreak. However, Sickening Shoal and Snapback cannot be played if Mycosynth Lattice is on the table.

If you were aiming to pitch Salvage Titan to Soul Spike or Sickening Shoal and then recover it from your graveyard, the pitch ability is EXILE a black card. Otherwise, really cool deck! That's a really cool take on an artifact matters type deck!

The first card that comes to mind is Yahenni, Undying Partisan; it's a step toward the speed problem and not enough fatty problem, and fits the sac theme if you decide that. Sometimes to speed up your game, you have to slow down your opponent with Frozen AEther, Urabrask the Hidden, Baral's Expertise (which speeds you up as well), Vandalblast, Static Orb, etc. Beside that, there's ramp and sneaking in cards to really speed up your game. Consider Sneak Attack or Quicksilver Amulet, Deathrender or Clone Shell; also consider rocks like Commander's Sphere, Dreamstone Hedron, Hedron Archive, Heartstone/ Carnival of Souls for unearth, Semblance Anvil and Nightscape Familiar. There's also cards that help your opponent as well, but if you've more value it could work: Mana Flare, Dream Halls, Braids, Conjurer Adept.

Situations where you're in a stahlwart, loosing, and have huge problems, are different from situation where you're at parity and have equal footing. At parity, card advantage and evasion rule. Chariot of Victory and Haunted Cloak, Archetype of Endurance/ Archetype of Aggression/ Filth/ Wonder/ Brawn, Hot Soup/ Deepfathom Skulker/ Whispersilk Cloak, maybe Trailblazer's Boots or Prowler's Helm, all of these can help close a game. This deck needs much more draw, especially with some discard outlets you have. Cards like Arcanis/ Humble Defector (good unearth target), Skullclamp, The Immortal Sun, Harvester of Souls, Phyrexian Arena, Divination/ Faithless Looting/ Concentrate, Chandra, Flamecaller, Open Into Wonder. If you're loosing, usually board wipes are the best answer. Black Sun's Zenith, Toxic Deluge, Archfiend of Depravity, Perilous Vault/ Worldfire, All Is Dust, all for dealing with indestructible. You could also add some fatties or deathtouchers like Taurean Mauler, Consuming Aberration, Scourge of Geier Reach, Nighthowler, Ophiomancer, Ogre Slumlord.

It's rather hard to suggest versatile cards without answering direct metas, do you have any specific cards or strategies giving you trouble right now?

For this deck, I would reinforce your themes of mill, reanimation, and draw, and probably add more ramp and board wipes. I personally like ETB/ death triggers over big 'uns and tokens, so that's going to heavily influence my opinion. If you were to go wide, you could add threaten effects and Faerie Artisans to sac them, you could add Genesis Chamber/ Grave Titan/ Wurmcoil Engines/ Spawning Pit for tokens, Dragon Throne of Tarkir for combat tricks. Also, to make the deck stronger, I could point out some of the weaker cards. Like Worn Powerstone, I'd rather add Hedron Archive or Dreamstone Hedron; Star Compass is OK, but I wanted to point it out because it doesn't fix your colors, I'd suggest Realmwright to unearth/ Fellwar Stone; Spell Pierce is not too good in my opinion as is way too easy to pay, I'd rather have Mental Misstep/ Foil; Death's Approach can be replaced with Snuff Out, Sudden Death, Sickening Shoal with all the big creatures you have. You made a lot of good picks though, like Teferi's Veil, Flayer of the Hatebound, Stitch Together, etc., those are rather strong in my opinion.

If I had the commanders or strategies you're facing I think I could answer better, but I hope this helps you take step towards a stronger deck! I'm always here