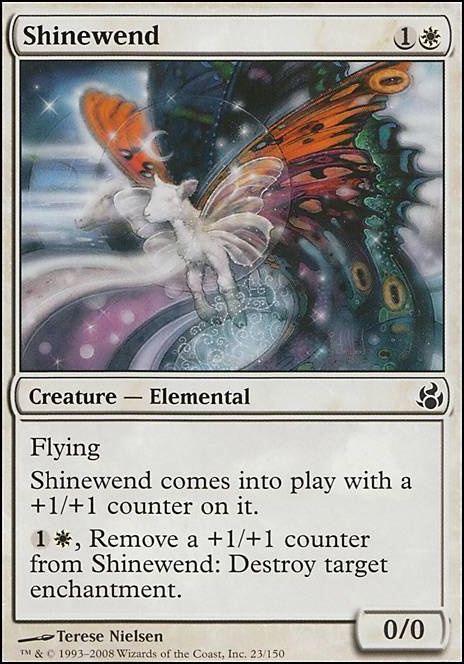 Shinewend enters the battlefield with a +1/+1 counter on it.

Agave is for soccer moms ($50)
by silberwasseraron

Don't talk to me or my children ever again
by sjettm

I really like the additions of Molten Hydra and Ashling the Pilgrim to serve as conditional board wipes. I also completely forgot about Mikaeus, the Lunarch. Shinewend is also a super neat card that I had never heard of before.

MrFertilid Thank you for your suggestions! I realized after reading your comments that 99% of the time when I play Marath, Will of the Wild I don't use his ability to move counters. Normally I fire damage at creatures or players and make 1/1 tokens. I need to think outside the box more.

I love your suggestion of Archangel of Thune and Spike Weaver. I'm so glad the former is getting a reprint so that I can hopefully afford one. I have a Ghave, Guru of Spores deck I have been tweaking which has a focus on going wide with tokens so I know it'll find a home! I will definitely make use of Illusionist's Bracers too!

I think I will hold off on the Shinewend and Stingmoggie only because I want the creature to have an ETB effect for use with my tutor cards like Green Sun's Zenith, Natural Order, Eldritch Evolution, and Chord of Calling. A lot of my stuff dies as soon as it comes down so I need to get some value off an ETB. Thank you so much for looking at my deck and making suggestions.

I will check out some of your decks, cheers!

I would go for a sort of mono-green stompy build. You can find a rpimer here. Usually these lists are mono-green. But they certainly do not have to be! Creatures that would fit the theme that I can think of off the top of my head are Experiment One, Avatar of the Resolute, Winding Constrictor, Strangleroot Geist, Narnam Renegade, Scavenging Ooze, Young Wolf, Aspect of Hydra, Rancor, Anafenza, the Foremost, Varolz, the Scar-Striped, Shinewend (excellent sideboard tech), and Woodland Wanderer.

Thank you for the suggestions pskinn01!

Genesis, Vigor, Asceticism, Illusionist's Bracers, Spike Weaver, and Lightning Greaves + Swiftfoot Boots all definitely seem like good options, but I don't know what to remove... Martyr's Bond is a favorite of mine, but I use it too much already.

I like Shinewend, Mephidross Vampire, Creakwood Liege, Craterhoof Behemoth, and Phyrexian Altar, but I dont know if there is room for them in what I like doing with the deck.

I need better graveyard manipulation, but Eternal Witness doesn't type too well with the beck, but I could be wrong. Mikaeus is good, but I need cheaper ways of removing counters, or his recursion won't work.

Doubling Season and Earthcraft are amazing in this deck, someday I hope to have the money to get them.

here are some suggestions (some budget, some not):
Enduring Scalelord - a flyer that gets bigger that you can pull counters off of to make more tokens.
Ajani, Mentor of Heroes gives counters, and potential card draw (life gain is possible too).
Doubling Season - should be in all token decks, but alas it is cost prohibitive.
Eternal Witness - recursion is good
Genesis repeatable recursion is better
Mikaeus, the Unhallowed - recursion again, yes
Triskelion - combos with Mikaeus, shoot self twice, shoot opponent once, repeat for win
Sheoldred, Whispering One - recursion on a big stick
Solemn Simulacrum - gets a land, draw a card
Spike Weaver - its a fog on a stick
Vigor - works wonders at stopping people from attacking you.
Martyr's Bond - another grave pact effect, but works on other permanents also
Earthcraft - helps ramp, and gets infinite tokens with cathar's crusade, make a token, tap token to untap land, repeat.
Asceticism - prevents targeted destruction/steal spells, and lets you regenerate helpful creatures no matter who controls them.
Sol Ring - should be in almost every edh deck
Chromatic Lantern - helps with mana fixing
Illusionist's Bracers - doubles your token generation from ghave
Phyrexian Altar - mana ramp and fixing in a token build
Swiftfoot Boots and Lightning Greaves - to protect key creatures from being targeted, haste is a nice bonus too.
Enlightened Tutor - to tutor for cathar's crusade or any other good enchantment
Worldly Tutor - creature tutor
Craterhoof Behemoth - makes tokens really big for a turn
Creakwood Liege - makes tokens, and buffs alot of your creatures,
Mephidross Vampire - maybe counter production
Shinewend - repeatable enchantment destruction.

I could go on as there is a ton of different cards that can work in a ghave deck. I have one on my profile, and my cousin dmaxskin has one on his (technically he has two since he is rebuilding after selling his cards).