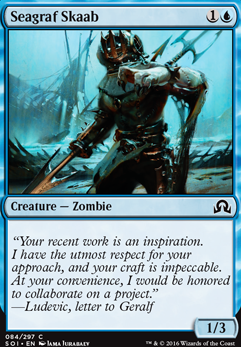 The Hyper Budget
by Twin_Dragons97 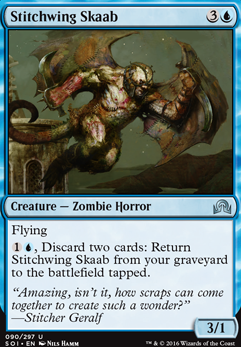 I would definitely cut Rancid Rats, Noosegraf Mob, Seagraf Skaab, Tattered Haunter, Doomed Dissenter from the creatures and Rise from the Tides, From Under the Floorboards and Drag Under from the sorcery slots. I would also probably cut Mindwrack Demon, Geralf's Masterpiece and Lamplighter of Selhoff.

Here's some of my reasoning behind those thoughts.- Rancid Rats I don't think you want to playing a 2CMC 1/1 even though it has death touch, you could be playing something more impactful even on a budget.

There are some other kinda bad cards as well like Liliana's Elite that could be cut for something better, but enough of that. Lets see what could help your deck perform a lot better. First of all focusing the on something for recursion or for aggro. Seeing that you're already in the camp I would suggest going for the recursion theme. Playing more 4x cards also really helps with consistency so you get to do more powerful plays more often.

I'll list a couple of cards that I would always run 4x in a zombie tribal with recursion theme.

This is the kind of shell I would build for a deck like this other cards worth considering 4xFatal Push annoyingly pricey but a very good card. Some form of card draw is also good, like your Epiphany at the Drownyard for an example. Having 2x Geier Reach Sanitarium instead of 1 could also be nice.

I hope this comment helps or gives you some fun ideas. I didn't really want to become "play THIS or dont play" so please do brainstorm with it a bit and fit it into your own budget. Luckily none of the cards I mentioned are more than 3 dollars (aside from push), so getting a powerful deck shouldn't be very expensive :)

I mean main suggestion to take out is the Seagraf Skaab. Yes it's a two drop 1/3, but it doesn't really do anything other than be a meat shield, and you only have one of them.

I believe that decks are build from the mana base up. I's say that you'd want 24 lands. I like the 4x Choked Estuary and would match it with 4x Sunken Hollow.

Relentless Dead, Cryptbreaker, Diregraf Colossus and Prized Amalgam are what you should be focusing on building out playsets of.

Cards with good synergy that I do not see here Main board here: Scrapheap Scrounger and Haunted Dead

Together this brings down the Converted average mana cost and increase the consistency of the mana.

I'd also look at Grasp of Darkness for removal.

As much as I hate hard casting Advanced Stitchwing that second ability is great synergy. 2 of seems right.

Just out of interest, is there any particular reason for you to only run 2 of each nonland card max? Seagraf Skaab for example, is for very obvious reasons (no effects at all, 1/3 weak body) a terrible card, and yet you run the same amount of those as you run Prized Amalgam, Cryptbreaker, Diregraf Colossus etc., actually very strong Zombie cards. I can try to help you with the deck, but I'd certainly break your 2 nonlands max rule while doing so.

Thanks for linking that! The first cards I ever started gaining interest in were Blue, so I never put much thought into a UB deck without many sorceries or instants. One question I'm having right now: Am I playing with a little too many sorceries? Ideally with enough time I would want to use Ever After to cast two Noosegraf Mob back to the field. Prized Amalgam would sync up perfectly with that. I think I would feel good about throwing a couple in the deck, and maybe replacing Seagraf Skaab. I've used Relentless Dead initially to help stall by keeping him out, but having a few more would make me feel more confident about using their secondary skill and I think it would give me the option of running less Cemetery Recruitment.

Thank you for the link and for the feedback!

Wailing Ghoul mills you, so it can pump the Diregraf. Also, it's 3 points of toughness means it has the chance to block without dying. Shambling Ghoul it a bit slow, but can dish out a bit more damage than the Wailing Ghoul. Walking Corpse is a vanilla 2/2, but if you're just looking for something to do on turn 2, it should be fine. Seagraf Skaab is the blue Wailing Ghoul minus its mill ability. Screeching Skaab also mills, but is a 2/1, so it will die pretty easily. Rancid Rats is a 1/1 with deathtouch and skulk, so while it is not powerful, it can sneak damage in or be used as removal for an opponent's creature.

If you're running some reanimation effect outside of Relentless Dead (Ever After,Liliana, Heretical Healer  Flip, Rise from the Grave, Necromantic Summons, Gisa and Geralf), I would go with the Wailing Ghoul for its ability to stock up the graveyard.

i like the deck, +1 upvote, now ill also mention that there are alot of horrors coming up in EMN, that being said for this standard legal deck, the Thing in the Ice  Flip isn't gonna return too many of those Eldrazi creatures back to thier hands, id add 2 more Compelling Deterrence and maybe a couple copies of Seagraf Skaab