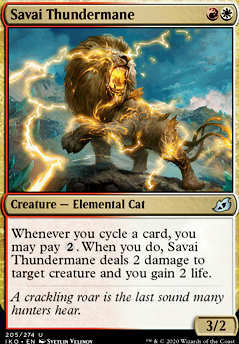 Whenever you cycle a card, you may pay . When you do, Savai Thundermane deals 2 damage to target creature and you gain 2 life. 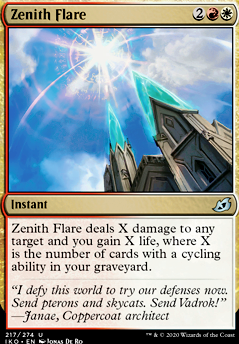 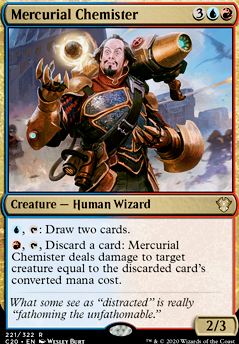 I play cycling, and I have found a really great synergy between Savai Thundermane and Void Beckoner. Savai Thundermane can clear the field for you of all the pesky small creatures, and then once you give him deathtouch, it's right in time for the mid game where the bigger stuff comes out. Unfortunately he doesn't have an activated ability, so you can't use it with Zirda here. Another card I like is Fiend Artisan, which has great synergy with all of the cycled creatures hitting your graveyard. I don't even use his activated ability, but he's often at least a 5/5 for 2 mana, which is fantastic for cycling. Again, it's another black card, so the mana base gets a bit stretched. I'm also playing blue for Time Wipe and Mission Briefing. I've been avoiding Yidaro, Wandering Monster because he goes back into your deck and doesn't count towards Zenith Flare. I'm curious to know how you are doing with Zirda. I haven't tried him out yet. I think my deck is getting a bit slow and it's tending to rely more on board wipes and winning in the late game with Doom Whisperer and the flare. The top decks using cycling play with the mana cyclers and try to be as fast as possible.

I like the idea of what you have going here. I have one suggestion I would make. Cycling is an ability that gives you a great way to filter through your deck pretty quickly, which means you want as many cycling cards in your deck as possible so that you can find the things you need. With this being said, I would suggest you remove one copy each of Savai Thundermane and Prickly Marmoset since they don't actually cycle. I understand they are strong cards, but if you end up with too many of them in your hand, you're stuck without any gas.

To replace them, I would suggest adding two copies of Yidaro, Wandering Monster as it cycles cheaply, and if enough copies are cycled, you get a big threat for free.

CYCLING IN STANDARD IS ACTUALLY GOOD (AND MARDU?)

I assume Savai Thundermane is just too slow?