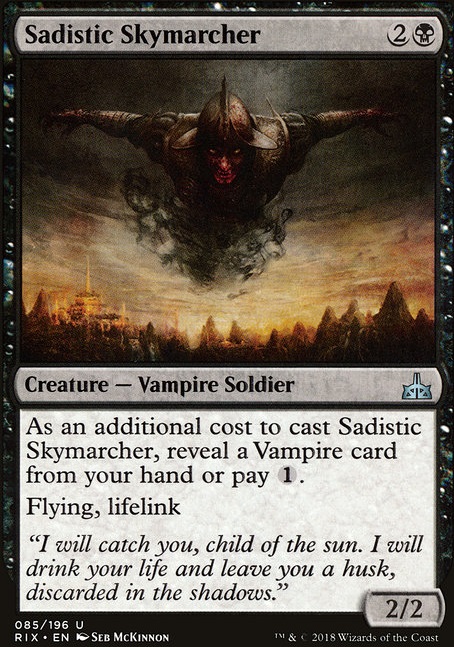 As an additional cost to cast Sadistic Skymarcher, reveal a Vampire card from your hand or pay 1. Flying, lifelink Living on the Midnight Sun
by PhantomSya

Edgar Markov
by 700bc 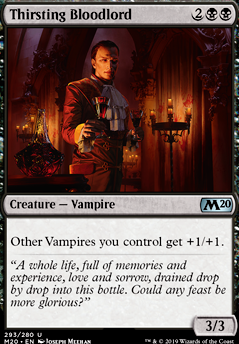 If you can get them, Radiant Destiny and Sanctum Seeker are incredibly powerful, and would really help you if you're trying to be competitive. Also I would personally suggest Bishop's Soldier , Adanto Vanguard , and Sadistic Skymarcher as solid early drops. Also, Elenda, the Dusk Rose , Champion of Dusk , and Twilight Prophet are very powerful cards. Good luck, vampires are awesome! +1

Check out my own standard vampire list here Nosferatu

Personally, I don't like the rate on Banewhip Punisher , Oathsworn Vampire (It's just really bad Bloodghast ), Sadistic Skymarcher , Tragic Poet , Foul-Tongue Shriek , Chalice of Life  Flip, Fountain of Renewal , Bishop of the Bloodstained (Anthems and Sanctum Seeker will just be a lot more damage over the course of a game), Ravenous Chupacabra , Profane Procession  Flip, or Underworld Connections . They're all just very low impact in a 40-life, 4-player format, with the exception of the last two. Profane Procession  Flip is just so much more expensive than something like Rise of the Dark Realms , and while you're not the first person I've talked to who seems to think Underworld Connections is an acceptable substitute for Phyrexian Arena , man is it ever worse.

I don't like the rate on Call the Bloodline , either, unless you want to go deeper on a Madness or Reanimator theme, which could work, since you might want Voldaren Pariah  Flip, anyway. If you did that, Call to the Netherworld gets back Elenda, Big Game Hunter is a nice replacement for Banewhip Punisher , Bishop of Rebirth could be decent, and bigger vamps like Nirkana Revenant , Patron of the Vein , Necropolis Regent , Guul Draz Overseer , Vish Kal, Blood Arbiter , and Butcher of Malakir become much more attractive. That would require a lot of changes, though. You could keep Profane Procession  Flip and get a lot more out of Crypt of Agadeem that way, though, so maybe don't rule it out.

You should think about Sadistic Skymarcher in place of the Bloodletters. The number of vamps you have make it easy to cast and the lifelink can be a gamechanger.

I think B/W lifegain vampires is a good deck and fun to play. I would play it as is and find which of the creatures you like best, and keep adding the ones you like while removing ones that don't work out. I would concentrate on lifegain and flying. Sadistic Skymarcher is a great card in my deck. Removal is very importnat cause most vamps are not very beefy. I would try Walk the Plank in stead of Impale and Recover instead of Waltz. Life gain and card draw can really help out new players buy time while you learn your deck. Lots of folks will tell you it's wrong, but Sword-Point Diplomacy is a great card for card draw in black.

I like your idea. Supernatural Stamina is a very powerful card. I would suggest looking into Sadistic Skymarcher it does everything you want. I have 4 of them in my vamp deck. Opponents hate the combo of lifelink and flying. It attracts lots of removal so I can play Sanctum Seeker and Twilight Prophet to set up wins. If you think your lifegain can support it, Arguel's Blood Fast

Flip is a teriffic draw engine.

I like your deck build going here, I love vampire decks, as for info on Vampires and tokens, here's the things I like so far with yours

Here's my advice: I'd lower off some creatures a bit like Sadistic Skymarcher (costs 4 or 3 depending on choice but flying is nice with it except very little difference from aspirants for a quick token deck build), Ravenous Chupacabra (find sorceries or instants to slay off creatures, not saying its bad but vampires), Voracious Vampire (since its effect triggers only once and for a 3 cost it wont help with tokens much as it only affects 1 vampire for 1 turn). I'd also 2nd removing Moment of Triumph like Exodus2727 mentioned. In your case you'll want vampires to be fast, skymarcher aspirant to 4x, vicious conquistador to 4x kind of thing because it makes city's blessing that much easier. Keep Elenda, the Dusk Rose for sure, I even prefer 2 of them if you can manage to get two of them.

If your also trying a life gain method with Twilight Prophet I'd honestly take it out if for that reason, but for ascend reason would make sense. Thats up to you, Personally myself, I'd take it out. Moment of Craving isnt a bad card but not best suited for a token deck nor is it extremely useful later on. Charge isnt bad either but with all the anthems you already have, its not completely necessary. I mean Legion Lieutenant, Radiant Destiny and the banner are all you need really.

Forerunner of the Legion I'd rather have Dusk Legion Zealot for card draws, may cost 2 mana but as I mentioned to rid of quite a few of things, you'll only want to add in cards you really need, thats where zealot comes in handy.

Here's my short version because I write to much, thanks if you read if so

Take out - Mo craving, Mo triumph, charge, prophet, sadistic skymarcher, voracious vampire, chupacabra, arterial flow is better with more of but I prefer to take it out, and possibly vicious offering in replace for a Gideon's Reproach or even Walk the Plank sorcery. Fatal Push if can get a couple of those.

I hope this helps out a little bit or maybe to much because I tend to overdo writing alot.

Jesse87 That looks a lot better. Also, good idea with Heartless Summoning. You could replace Sadistic Skymarcher with Bishop's Soldier. Costs 1 less and all you give up is flying. Add 3 of those and then replace the 3 Shalai, Voice of Plenty with 2 Lyra Dawnbringer maybe?