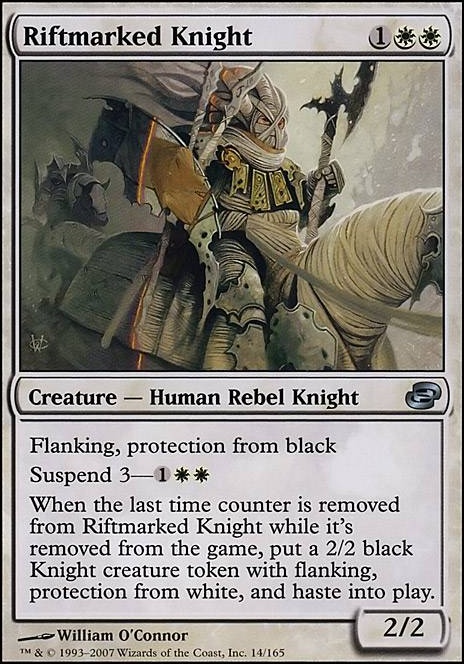 When the last time counter is removed from Riftmarked Knight while it's removed from the game, put a 2/2 black Knight creature token with flanking, protection from white, and haste into play.

Army of Dragon Riders
by S_Salazar17 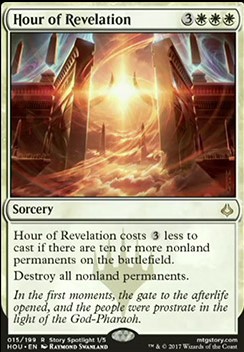 Thank you whyundead3! I think Bound in Silence is a pretty good card, but to be honest, I really don't know what to get out of the main deck... The only reason I have a Big Game Hunter in main deck is that he have legs and can attack after he has done his trick... I forgot to put two of them in the sideboard (which need a lot of work), with another Big Game Hunter... I think I'm gonna to update it right now... thanks for the reminder!... I really not sure whith Riftmarked Knight, should I put it in sideboard or I'm missing something great of it?

I tried making a rebel deck a while back, really like what you're doing here.

Might I recommend Riftmarked Knight and maybe a one of Bound in Silence.

Riftmarked Knight does have a good duality to him, but no idea on what to take out. He would also remove the balance of white and black mana symbols in the deck. Holy Strength, Unholy Strength, and Edge of the Divinity will go in. Also Dark Favor and Divine Favor will find a way in.

hahaha Wake the Reflections would be great. You have made me decide to create an EDH deck with this theme.

You have an awesome day as well!

What an awesome theme! I love it!I think Riftmarked Knight has the right sort of duality to him.Holy Strength and Unholy Strength, I feel, have a very mirrored and exalted feel to them.You wouldn't be able to put it on most of your creatures, but Edge of the Divinity has that balanced feel to it too.

And now, a joke: Wake the Reflections. But if you put in some things that generate knight tokens, like Gideon's Phalanx, Knightly Valor, or Sorin, Grim Nemesis, you might jst get something out of it :)

Have an awesome day!

For providing Entreat the Angels with Haste, consider upping Odric, Lunarch Marshal to 4 then adding creatures that have Haste.

Some that do:
Akroma, Angel of Wrath (already here)
Riftmarked Knight when suspended

Actually, that's it in Modern for mono white, without looking at Colourless or Artifacts like Akroma's Memorial