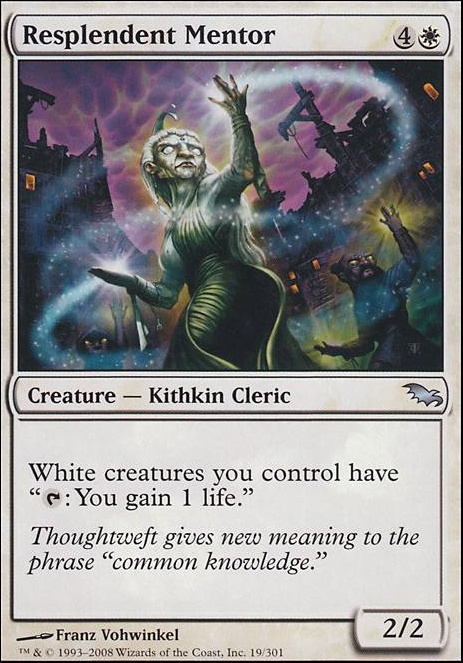 White creatures you control have "Tap: You gain 1 life." I Am Inevitable
by BigMosh

Ah, what is there to dislike about life gain? The deck looks sweet, however, I do have some suggestions.

Whilst Exstort is a lovely mechanic, I feel as if many of these creatures are lacking. Basilica Guards, Kingpin's Pet, Knight of Obligation, Thrull Parasite, and Syndicate Enforcer all just have egregious stats. Similarly, Resplendent Mentor is a five Mana 2/2 that doesn't do something immediately unless you have a board state.

Armillary Sphere doesn't do much. You probably prefer to cast your commander than paying four and finding two basics.

Endless Scream is far too much Mana for what it does in my opinion. Same with Howl from Beyond.

Linden, the Steadfast Queen just seems awesome in here, as does Shadowspear and Loxodon Warhammer. Ivory Tower and Revenge of Ravens could be interesting.

You have quite a bit of creature based removal, thus you may wish for dealing with other permanents. Despark, Generous Gift, and Disenchant are all great.

That's all from me. Good luck!

Devoted Druid + Vizier of Remedies = Infinite Green mana. Devoted taps for G then Vizier takes the -1 minus 1 = 0 -1's. redo for infinite mana. Famished Paladin + Resplendent Mentor = infinite life. Enchant Paladin with Mentor. You tap Paladin for life / you gain life so he untaps - So on and so forth.

I didn't want to comment on the deck because it is out of my wheelhouse and looks pretty solid to me. I'll try to give you a few things to work with though.

One of the strongest white cards I've seen printed recently is Smothering Tithe . This thing gets nutty. I only see 1 way to remove an artifact/enchantment so maybe Return to Dust ? Winter Orb is a staple of these sorts of decks. Hushwing Gryff or Torpor Orb will turn off some decks, might be worth having one of them. Depends on your meta. Aven Mindcensor pisses me off. Every. Single. Time. Definitely worth thinking about.

Resplendent Mentor seems like the most obvious thing to remove. Maybe you have a neat idea with it though? Card draw is great but I don't see a lot of lifegain so using Well of Lost Dreams will be difficult at best.

Hope I've given you something worth while to think about.

@hkhssweiss: All right. I suppose I can deal w/ those two; at least they're better than (Insert Boros Partner Duo from Battlebond.). That said; It'll be nuts if I can switch the 99 to 98. If Aurelia is to be removed from the equation, I wonder how these two can be useful for a Value Town/Stax/Prison Deck. Oh, and more questions; should you choose to accept them:

@hkhssweiss: I see... Well, I don't want to get close to Voltron in any way. Although that Art for Aurelia #1 looks epic. Just know I'm not just aiming for Infinite Aggro; My initial Plan is Value Town/Stax/Prison. What are your thoughts on Kismet? Should I add something like Winter Orb/Static Orb, or even Icy Manipulator? As for Treasonous Ogre, I guess there are ways around this... Lone Missionary can gain more life than lose from the Ogre; given he is flickered by Eldrazi Displacer, not sold on Resplendent Mentor, though it gives infinite life...

That said, FOUR Themes is overkill, & I dunno how to add in Aurelia into this... I don't want Equipment/Auras here, & I certainly don't want an overamount of stuff in such a way... I hope you Understand, sir. I'll be cutting some stuff for now if you want to find a way to add a 4th theme into all this...

Resplendent Mentor can make a 3 card combo a 2 card combo. It's clunky though.

I don't think the combo is good enough for the following reasons:

Keep in mind that there are much better combos in modern that don't see any play. Duskmantle Guildmage and Mindcrank requires only two cards and 8 mana (or 3 cards and 5 mana with Gut Shot), and wins you the game right away. Resplendent Mentor and Famished Paladin requires only 2 cards and 7 mana, and while it doesn't win you the game, it does prevent most opponents from winning. Neither of these combos is good enough, and yours is far worse.