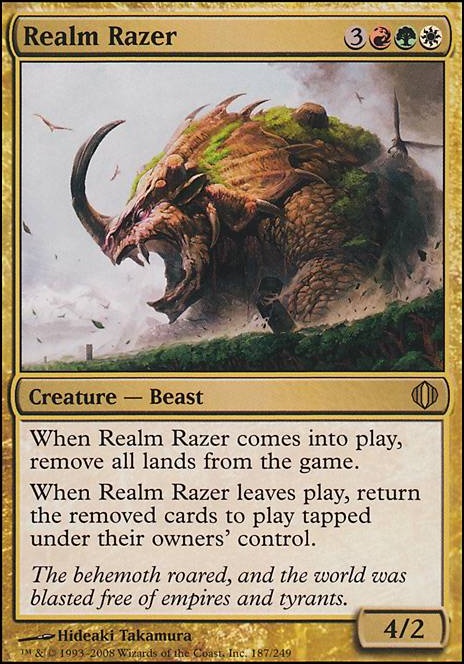 When Realm Razer enters the battlefield, remove all lands from the game.

When Realm Razer leaves the battlefield, return the removed cards to play tapped under their owners' control. 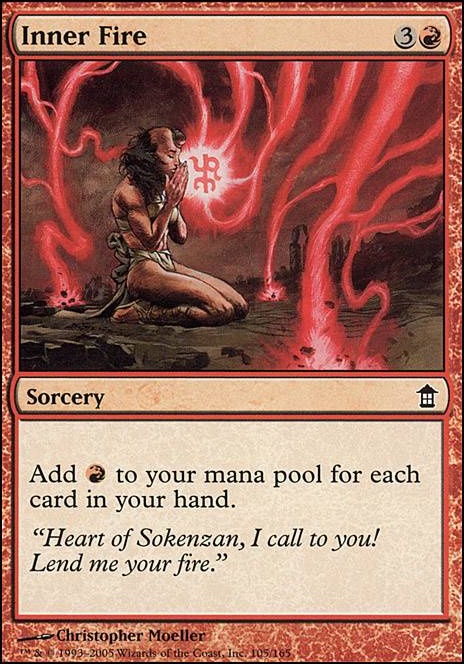 Since this deck gets a lot of power onto the board faster than almost any other deck , what about Realm Razer to lock down the game?

Oh, it occurs to me that there may be additional tricks to setting up a situation where you have Realm Razer and all your lands without the aid of a Stifle effect, but they would still require outside assistance.

For instance, something like Teferi's Protection could phase out your lands before the exile trigger resolves, preventing them from being exiled (though you won't have access to them until they phase back in.

But with just Razer and Soulherder , you won't be able to save all your land from exile no matter how you stack the triggers.

So you have Realm Razer in play, which means there are a number of lands it has exiled. At the beginning of your end step, you use Soulherder to blink it. Both Razer triggers go on the stack, and you order them how you please.

If you order them so that LTB resolves first, then all the exiled cards return tapped. Then the ETB exiles all the lands. Razer is back on the field, every single land is in exile.

There is no situation under which you could cast Razer and not have any exiled lands without Stifle ing the trigger.

Sismir on Exile realm razer and the ...

But if i do put Realm Razer . On the field. And then later blink him and reverse to LBT and ETB order to keep lands on the files wil it work?

During the resolution of Soulherder 's ability (if targeting Realm Razer ), both of Razer's abilities will trigger. The second one when it leaves the battlefield, the first when it returns. Both abilities will go on the stack when a player would next receive priority.

The order they go on the stack (and thus resolve) is determined by the controller of Realm Razer . Considering Soulherder can only target creatures you control, I'm assuming that you have control of the Razer as well (if not, you can't target it in the first place), so you would choose the order in which they go on the stack. The last ability placed on the stack will resolve first.

Regarding your second question, Realm Razer 's abilities are linked abilities. The second ability will only return cards exiled with the first ability for that particular instance of Realm Razer . So if you pull the trick where you cast Realm Razer and then immediately return it to hand (using something like Unsummon ) to permanently exile all lands, a later casting and then bouncing will not return the first set of exiled lands. Same goes if you have two Realm Razer on the battlefield. Bouncing one will not return lands exiled by the other.

xtechnetia on Exile realm razer and the ...

1 - Yes, you can choose how to stack Realm Razer 's ETB/LTB triggers. Whichever ability you put last on the stack will be the first to resolve.

2 - No. Realm Razer only "remembers" the lands it exiled via its own ETB trigger, for the purposes of its LTB trigger. Once it's flickered, it's a new Razer with no memory of, or connection to, other lands exiled.