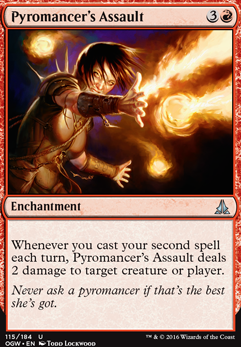 Whenever you cast your second spell each turn, Pyromancer's Assault deals 2 damage to target creature or player.

The Army of Chandra
by Frisk00

Jori En would be an interesting tribal commander. The card advantage of this kind of a spell slinger commander could help to bring merfolk to the battlefield. It's a new idea for me because there are less red merfolk than there are green or white.

It would certainly be good with surge cards such as Fall of the Titans and Grip of the Roil and of course Pyromancer's Assault though.

I like the idea of being really cheap and fast. However, with 16 land, you'll rarely ever play Chandra, Pyrogenius. But otherwise, I like it a lot. Possibly remove Liberating Combustion and Flame Lash because of the cost as well. Pyromancer's Assault is a good card for your deck, but you have no spells to draw cards so you may run out of gas quick and be top decking. I suggest putting in Tormenting Voice or Cathartic Reunion and Cryptic Serpent. With these cards you'll be drawing a lot more and also be able to pump your Enigma Drake like crazy.

No worries! I didn't read it that way.

So, I'm taking out the 2 Consulate Skygate and Implement of Combustion.What are your thoughts on Weldfast Monitor? I only have one Scrapheap Scrounger, so maybe one of each? And then 2 Fleetwheel Cruiser.

Also, do you think Pyromancer's Assault is maybe too slow? I'm wondering if Chandra, Torch of Defiance would be a better fit, though I don't have much to protect her.

I only have one Saheeli, but if I pull or trade for another I'll consider swapping. I do like Chandra for the mana ramp.Losing Jori En, Ruin Diver and Jace, Unraveler of Secrets would limit my card draw, so if I take those out I'd probably want to swap Pyromancer's Assault as well since I won't be playing 2 spells in one turn as often - I run out of cards. Maybe adding Iron League Steed for the pyros? If I fabricate for servos, Chief of the Foundry will come in extra handy.

I did have a thought about that enchantment from Oath that deals 2 damage to a creature or player whenever you cast your second spell in a turn. Seems good here since hitting 16-18 damage is common and that little bump could make all the difference. More importantly it takes your pump and draw spells and gives you a little bit of targeted damage for spot removal that you currently lack.

Pyromancer's Assault. On that same note you may want to revisit Jori En, Ruin Diver for that extra draw. See what happens.

I saw something like this that used Bone Saw and Cathar's Shield. to trigger prowess. Could be useful here to also more easily trigger prowess and Pyromancer's Assault.

That route would be sick with Paradoxical Outcome. Play and replay them all to trigger prowess and Ascension twice.