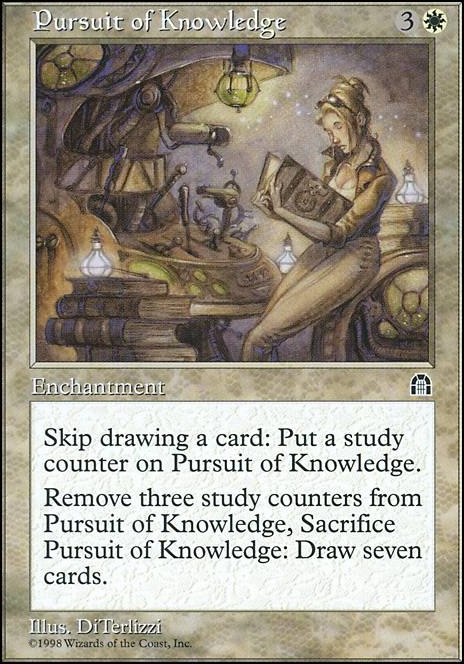 If you would draw a card, you may put a study counter on Pursuit of Knowledge instead.

StopShot on Which Card Should Replace Temple â¦

Nice deck! Keeping your budget in mind I have some suggestions.

You have a severe lack of card draw, which green is surprisingly good at. Cards like Primordial Sage , Regal Force , Soul of the Harvest , and Beast Whisperer are all really good for card draw. Garruk, Primal Hunter and Freyalise, Llanowar's Fury are also good for card draw as well as the rest of their abilities. You might be worried about drawing too many cards after Primal Surge goes off. Cards like Abundance , Words of Wilding , Pursuit of Knowledge , and Possessed Portal can prevent you from decking yourself after Surge resolves. Skullclamp is a good way to draw more cards, too.

I think you can cut a lot of the enters tapped and cycling lands for more basics. You want to be able to search for lands even late in the game because not being able to find anything anymore doesn't feel great, and currently you would need all of your plains out to make Emeria trigger which isn't a lot. Not to mention if anything were to happen to a single one of your plains then Emeria doesn't do anything extra. If the land can't add more than one color of mana and if it doesn't do anything substantial for you then I'd consider cutting it and replacing it with a basic. While a bit pricey, Smothering Tithe is great if you have one.

You'll want to win as soon as Surge resolves. I see you have Odric, but none of your creatures have haste nor do you have a way to grant it. Craterhoof Behemoth is probably outside of your budget currently, but End-Raze Forerunners shouldn't be. Akroma, Angel of Wrath , or even Akroma's Memorial can be fine. You are also missing a couple mana dorks, if you can find them, in the form of Fyndhorn Elves , Birds of Paradise , and, although not a dork in the traditional sense, Karametra's Acolyte .

Well what to cut? There's some cards that don't do much for you. Sunspring Expedition for example gains you life, which doesn't get you closer to winning. What you cut is up to you, but a good rule of thumb is if it doesn't put you closer to winning or set your opponents back then it's probably not worth the slot. It's a tough rule to follow sometimes because damn do I love me some less than stellar cards but it helps in the end.

Overall the list looks good, though. I can't wait to lose to it!

While looking for enchantments and stuff for a build Iâve been working on for Queen Marchesa I stumbled across this card.

From what Iâm getting about the card is that you donât necessarily have to skip your draw step draw and get to choose when you want to skip drawing a card. This could be done with the Monarch trigger for example or other draw triggers like ones from Phyrexian Arena or draw spells like Brainstorm which would fill the counters right away despite you needing to put 2 cards on top of the deck afterwards before then drawing 7 cards.

Then you can also get into proliferate triggers as a way to build these up fast for decks that do run themes like that.

Lastly I do like that as long as it has the 3 counters on it you can sac it at any moment to net you those 7 cards so holding onto it may be a good idea to leave it up for whenever you think may be best to draw a new hand.

Rings of Brighthearth interacts with a lot in this list but is especially delicious with Pursuit of Knowledge.

The deck looks pretty good. It has a good amount of board wipes and ramp, but I think it could be stronger with more card draw. There's Mystic Remora, Arcanis, Skullclamp, maybe Sandstone Oracle, Recurring Insight, Slate of Ancestry, Jeskai Ascendancy and Well of Lost Dreams.

Otherwise I like the control and lifegain aspects, it looks like a good partner deck. Hope this makes it stronger

Pursuit of Knowledge and Psychic Possession help with the nasty Nekusar player, as you can choose to never draw again

Looks like a good start. I'll do my best to suggest older cards but most of the cards from portal 3 kingdoms where liu is from are either bad or super expensive due to its very limited print run in english. Here are a few initial thoughts:

I think the weak spot of the deck right now is card draw. EDH games tend to go on a lot longer than other formats. This means that you will soon run out gas in hand and be reliant on topdecks. White unfortunately has the weakest card draw/section of the 5 colors so your options are a bit limited. Mentor of the Meek is borderline as to if you should run it since with that card you want a lot of 2 or less power creatures. In terms of artifacts, The Immortal Sun, Staff of Nin and Mind's Eye can help. It has the potential to backfire really hard but if you are wanting older cards you could try Pursuit of Knowledge but it's really bad if they destroy it after you've skeipped a couple draw steps.

If you wanted to boost your commander, the cards he mentions are Guan Yu, Sainted Warrior and Zhang Fei, Fierce Warrior. If you don't have either in play, guan has better stats and is arguably a better commander than liu as he's more consistent.Thalia's Lancers can help liu find his missing buddies as well as several other cards in the deck. (worth noting it doesnt just find creatures so it could also find the imortal sun or a land like Eiganjo Castle or Kor Haven if needed.

Right now i think a lot of your games will be won off of smacking them a few times with yor commander and dealing lethal (21) commander damage. This archetype is called voltron. If you're planning on going down this route, Inquisitor's Flail, Fireshrieker, Strata Scythe and Battle Mastery among many others can help speed up the clock. If you go for this route, i'd recomend adding more mana accelerants to the deck to get liu out before turn 5

I'd also probably cut lifelink, i don't think it does enough for you here without much in the way of life gain synergy. Archagel of thune likewise isn't super synergistic but atleast she both gains life and rewards you for doing so on the same card.

Card-draw is vital in EDH and nearly impossible in Boros colors. Reforge the Soul is one of the best red card-draw spells that isn't Wheel of Fortune. I like Outpost Siege a lot. Cathartic Reunion, Tormenting Voice, Faithless Looting, and Wild Guess are decent. Better with graveyard recursion or extra draw Alhammarret's Archive) but that's Red for ya.

Pursuit of Knowledge isn't too good. Neither is Armistice. I can't think of or find any others but trust me, White is barren for card draw.

Mind's Eye is one of the best colorless options but it's expensive. Staff of Nin isn't too bad. I love Farsight Mask. Perhaps Infiltration Lens and Rogue's Gloves? Most of the rest help you opponents, like Howling Mine, Temple Bell, Font of Mythos, etc.