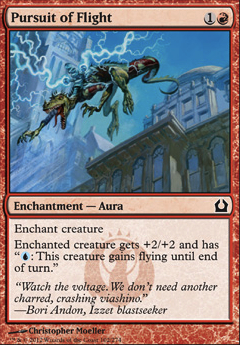 Enchanted creature gets +2/+2 and has "U: This creature gains flying until end of turn."

Abuse an Old Lady!
by pantlessbatman29 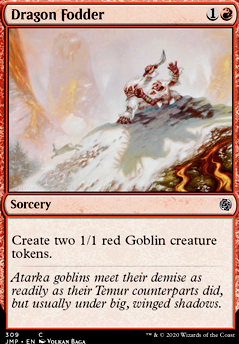 And a random request: put in Frostburn Weird! I remember putting an aura on this thing (Pursuit of Flight in particular) and smashing for huge amounts.

It might also be worth looking at articles about the various Ravnica draft formats. Including some of the top commons from those articles sounds like good nostalgia and power points.

These cards are just not strong enough, or are just too slow/inefficient to play. Mercurial Chemister almost makes this list, but I'm not sure if you want it for the card draw. Then again, it may just die to a Lightning Bolt, so think on it.

The cards I would recommend putting in for sure are:Cyclonic Rift, Mizzium Mortars, and Repercussion.

Some Neat Cards You May Want:

-Gelectrode and Blistercoil Weird combined with Curiosity and Quicksilver Dagger.

-Spellweaver Volute, to get those extra Brainstorm and Swords to Plowshares people just love giving away. Although you will want more sorcery spells to go with it. Like...

-TimeWarp, or some other "Take an extra turn card".

-Isochron Scepter lets you turn a Counterspell into a Flipped Erayo, Soratami Ascendant for 2 mana.

-Also Swiftfoot Boots may cost more but the hex-proof can be more useful than shroud.

I were you I would run one Misdirection/Force of Will to see what I am pitching for it. Then removing those cards until I do not want to pitch anything with Misdirection most of the time. This may help improve your deck to find out what you want, and what is not so great.