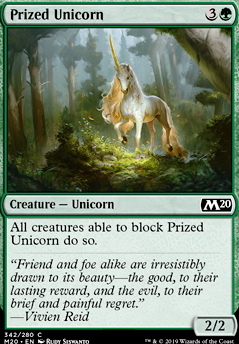 All creatures able to block Prized Unicorn do so. 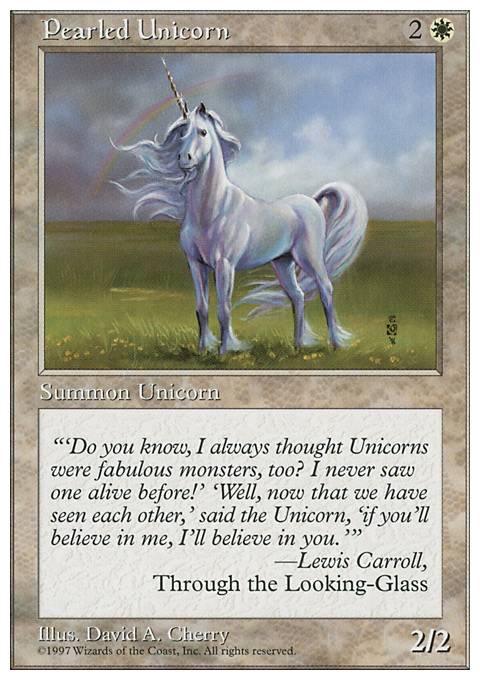 TypicalTimmy on Niche Effect for Equipment

However, if your gameplan is removal via enchantments, there's always:

In fact, Mire Blight and Yoke of the Damned is a really good combo. Maybe your best bet.

Benevolent Unicorn is a weird card since it makes everything take less damage (not just your stuff), but it could be good while you're building up your board.

Prized Unicorn could be a really neat and thematic way to finish a game. Maybe consider adding a few other similar effects to effectively make all your other creatures unblockable, or to make this guy indestructible / reusable.

Totem-Guide Hartebeest is another on theme creature that actually lets you get something like Indestructibility for your Prized Unicorn or other utility creatures.

Revered Unicorn and Timbermare are the other two that jumped out at me as having some kind of weird potential, but I'm not sure how I feel about them overall.

Hydronvanquisher on How does Sudden Spoiling affect â¦

Hi all, I've been reading up on Sudden Spoiling for a little while now and believe I have a basic understanding of it. However, I am still a little confused on how it would play out in the following scenario:

My opponent decides to attack me with everything. After he declares attackers, and finishes casting any spells, he passes priority. I presume this is where I would either declare blockers or cast an instant and then declare blockers.

Could I cast Sudden Spoiling and then since the spell temporarily negates the static ability of Void Winnower (meaning I can block with an even CMC creature), declare my two creatures as blockers and then proceed?

I'm assuming I can but wanted to confirm I wasn't overlooking anything.

As a new wrinkle, what if during my casting step (prior to declaring blockers and prior to casting Sudden Spoiling) I decide to cast Quicken and then Act of Treason on his Void Winnower? I then decide to cast Sudden Spoiling and let combat proceed. What happens to his already declared Skyrider Elf if the CMC is even? He's declared it as an attacker but now that I have a Void Winnower on the battlefield (albeit temporarily) under my control, is it still an attacker or does it remain tapped but no longer have the ability to proceed to combat damage?

Sorry if this is a bit convoluted but I wanted to make sure I have an understanding. Thanks for any advice/info you can all offer.

I love the theme 100% I may use this as inspiration for a new deck. I may splash some green for Prized Unicorn. Good job :)

If you want more creatures you can add another Sakura-Tribe Elder and remove Rampant Growth.

PS: As you said that this deck is casual I suppose you don't want a competitive build with the best possible card in every slot, that's why I give you this "keep the idea" recommendations , I hope it helps :D