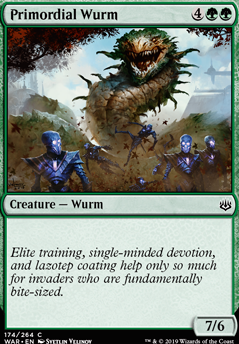 I would take Primordial Wurm and Quilled Slagwurm out first, as they are flavortext dudes. Greater Sandwurm would be cut after that, but the sandwurm does come with its advantages.

As far as things to take out, you have so many wurms and not all of them are winners. and they are all also very high cmc. maybe take out Greater Sandwurm, Primordial Wurm, Quilled Slagwurm?

I know some of these are expensive but I mean you figure out if you want them or not ;)

You can look at a deck I have with other big creatures in case you're wondering: https://tappedout.net/mtg-decks/a-green-mans-deck/

I'm new to this whole feedback thing but one general thing I would try to do in your position is look at big creatures (specifically 6 drops) that have abilities unlike Primordial Wurm, Wild Ceratok, Tusked Colossodon, Alpine Grizzly and Colossal Dreadmaw. I know you can find better cards than all of those for the same mana cost... Just a question of doing a bit of research.

Untamed Kavu is a solid card, and I would definitely cut the Primordial Wurm for a card like Territorial Allosaurus.

There's a lot of changes which need to be made. First drop all the Primordial Wurms, switch them for Pelakka Wurm or more Aggressive Mammoth, not having trample on a six drop is so important. Also you need more land you should play at least 23 forest in a deck like this. Ditch Bitterbow Sharpshooters, Ridgescale Tusker, Wall of Vines and Wild Wanderer. There are much better drops at that slot. Take a look at some of the other mono green list in here and see what they are playing, they usually have budget alternatives to some more expensive cards, Vine Mare is a good example of this.