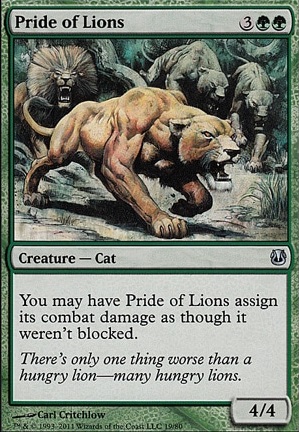 You may have Pride of Lions assign its combat damage as though it weren't blocked.

Noticed you pulled Alms Collector out, he has been invaluable for me fighting Grixis () commander's like Kess, Dissident Mage / Jeleva, Nephalia's Scourge for Enter the Infinite, and Izzet () like Mizzix of the Izmagnus Infinite Mana Blue Sun's Zenith decks.

Qasali Pridemage > Felidar Cub. I know he has a cost, which sucks, however, the Exalted is a nice boost, it's contradictory to your Beastmaster Ascension strategy, so I kind of understand, but I would worry about over-committing with no protection / counterspell.

Nature's Lore or Three Visits > Rampant Growth. Can pull the Savannah or Forest and doesn't enter tapped. So the CMC for Nature's Lore is only .

Keen Sense feels like over-committing on a creature and a 2-for-1 loss in an exchange. Plus it only draws you 1 card, AND the creature has to deal damage to an opponent. I wouldn't run that, I'd rather have haste from a Swiftfoot Boots over that.

Uktabi Wildcats is to high CMC for how big he's going to be CMC5 for 5/5 is reasonable, and his ability isn't that great, plus sac a forest (means he gets smaller) and doesn't protect him from exile. You only have 14 forest so need 35% of your forest just to be so-so. Perhaps if your game plan was to Traverse the Outlands into him, it would be ok, but not in the current build. Put in some aggro, "must be answered", like a Lost Leonin.

Riparian Tiger CMC5 for a 4/4 Trample seems wrong, if you have other energy cards, maybe I'd be happier with a Pride of Lions at that CMC and doesn't need the Trample.

Triumph of the Hordes could work well for you with so many creatures. Excellent with Adorned Pouncer or a Skyhunter Skirmisher

I don't like the CMC on Harmonize, would rather Hunter's Insight on an Eminence Cat.

You have lots of High CMC, I would rather tutor for the cat I want with things like Eladamri's Call than have 4 CMC6 cats for example, just have 2 CMC6 cats and 2 tutors to get them. But preference I guess.

Thanks MegaMatt13. Will digest and figure out what to cut to get them in.

Berserk has been in and out, I thought the same about the removal aspect of it too which is cool, especially if it's attacking an opponent in a Multi-Player pod. Have to find room.

Pride of Lions I keep going back and forth on, the idea is to tutor trample, Green Sun's Zenith into Rhonas the Indomitable or Steelshaper's Gift into Loxodon Warhammer, or Arahbo, Roar of the World last ability... so Trample overcomes all but the toughness of the blocker anyway, where Pride of Lions does that extra damage, but then gets killed probably without actually killing his blocker either (Because if the blocker can't kill him why did they block him in the first place, and he does no damage to the blocker). He's good, should find something to out for him.

Metallic Mimic is really borderline, I think about his interaction with Brimaz, King of Oreskos, Kemba, Kha Regent, Pride Sovereign + Regal Caracal (Especially for my Felidar Sovereign win-con), Ajani, Caller of the Pride. I originally had more, like White Sun's Zenith and some others, but there are less. Metallic Mimic on his own isn't that exciting 2/1 for . He's definitely high on the cut list.

Puresteel Paladin + Leonin Shikari makes Eminence and Lightning Greaves a viable option together, but its janky. I cut Sword of Light and Shadow and Sword of Feast and Famine already because of the same issues. It's really the haste more than the protection I want anyway since Selsnya is quite limited for haste.

Both suggestions Heirloom Blade and Fireshrieker are great, I'm struggling a bit with which cards to cut, and worried about getting too few cats.

Thanks for the feedback, MUCH appreciated.

Just came over and checked out your deck...very nice :)

Definitely looks like your meta is more competitive than mine so I appreciate the different selections you've put in the deck.

From your maybelist I would definitely consider adding Heirloom Blade and Fireshrieker. You have cats that care about being equipped. Heirloom blade basically ensures that you will always have a backup cat when one gets destroyed (and the power buff is great). Fireshrieker is a low cost double strike enabler.

I also like Berserk as it can be a surprise win or be used on an opponent's attacking creature when they attack someone else as a form of removal spell.

Pride of Lions from your maybelist is a surprise star in my deck. I know 5 mana for a 4/4 sounds really bad, but with him you KNOW your damage is getting through. They will be taking 7 damage with eminence (or 14 with double strike or Arahbo's second ability).

I ended up cutting Metallic Mimic. I usually only want 1 or 2 cats on the battlefield. Its single +1/+1 counter wasn't impactful enough. The mimic is great in "go wide" decks.

I also go back and forth on Lightning Greaves. It is a "non-bo" with Eminience. It does have value in protecting Arahbo himself when he is on the battlefield though.

I very much like your mana base, though I think it wouldn't be remiss of you to add a few more utility lands in the mix. In particular, Rogue's Passage can allow you to guarantee damage gets through, especially since you aren't running many sources of evasion. Blighted Woodland taps for mana and can ramp you later for the long game, while Hashep Oasis and Shefet Dunes are cheap and can pump your creatures.

Going back to evasion, your deck doesn't have a whole lot of it. Many Arahbo decks are running Rancor, but I feel too few of them are also running Gryff's Boon. It works surprisingly similar to Rancor, albeit it's a little bit more expensive. Still, given that it has built-in recursion means that you can consistently keep your cats in the air. If you end up adding more equipment, Prowler's Helm and Trailblazer's Boots practically guarantee your creatures will become unblockable.

If you want to stick to strictly creatures, on the more expensive side we have Pride of Lions that can damage your opponent regardless of trample/blockers. Very neat!

For 1v1, you can get a very quick kill in with Lost Leonin... with Infect plus Arahbo's eminence trigger, that's a 2 turn clock on one creature! The best part is that it curves very well with Ajani, Caller of the Pride for a turn 3 kill. If you'd like more ways to curve into a T3 kill in this deck with Lost Leonin, Duelist's Heritage and Silverblade Paladin both enable double strike for 3 mana.

The last bit of advice I have is in regards to cards in your deck like Thalia, Heretic Cathar. Personally, I think you should go big or go home on the stax types of effects. Just by themselves, they are mostly minor inconveniences. It is much more effective when you can combine Thalia with multiple effects that tap and lock down your opponent. At the very least, consider cards like Silence and Lapse of Certainty to throw your opponent off. Rule of Law for is fun option that also happens to have Leonin on it... flavor points!

One cat that has been working great for me is Pride of Lions. 5 mana for a 4/4 is usually blah but Arahbo pumps him into a 7/7 who can get damage through no matter what. He can deal a crazy amount of damage with any equipment or Arahbo's second ability.

Sorry to hear your experience with the precon was rough. I think the main problem of the precon itself is that it's unfocused (it aims at both "go-wide" and "go-tall" strategies). Also, the removal spells in the precon are awful.

I've found the upgraded version to be quite powerful though. I've focused on stuff that buffs the power of an individual cat as opposed to creating tons of cats. Equipment in particular has been very helpful as has stuff that grants double strike. This ensures that my cats can punch for enough damage to be worth it.

Keep up the good fight...cat power!

Nice, that's a lot to go over!

I don't really want to go down the lifegain route, simply because my playgroup will decide that I am the main threat as soon as I pull out this deck at the table, and they will kill me before I even manage to gather enough mana for the commander. Sadly, they lack proper threat assessment - it's a real issue that has surfaced a few times now. I was already contemplating True Conviction, so I will keep that in mind and see if I can add it into the deck at some later point.

Nacatl War-Pride is indeed amazing, insane when the coat of arms would be in play.. I just, I can't stand the border! It's terrible.. ugh. as soon as they reprint this I will put it in, but till then, I can't. I will however get that Pride of Lions, and Prowling Serpopard, they add heaps of power and utility.

Cathars' Crusade is nice but works better in a token deck, will put it in the maybeboard for now. Gavony Township is a bit expensive to use, but the counters do stay.. and I think I'd rather use the mana for Arahbo or Jazal. It is a land though so like you said it's negligible.. will also maybeboard. I was already thinking of Asceticism and Privileged Position slipped my mind, it's slightly cheaper and covers more ground so I'll find a way to put this in.

Thanks a lot for the suggestions!