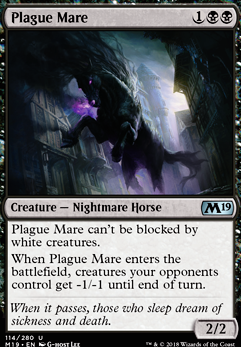 When Plague Mare enters the battlefield, creatures your opponents control get -1/-1 until end of turn. 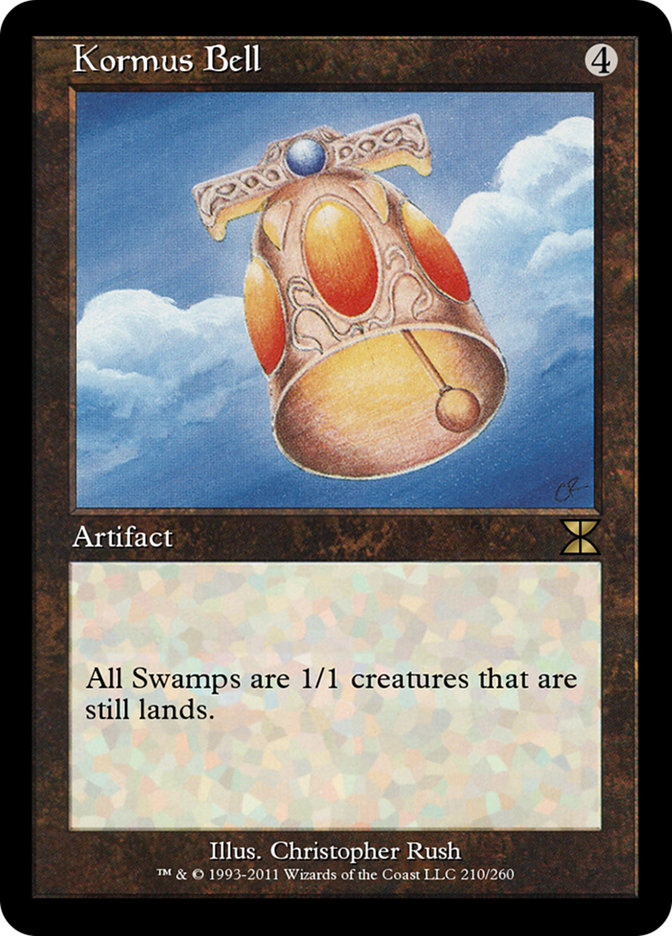 No prob dude, I'm glad I could help. The only card I felt kinda iffy about suggesting to cut was Plague Mare lol. I'm glad you cut In Garruk's Wake. The cmc was too steep imo, and I get that Green can ramp into it a turn or 2 early, but it seems like that would be Mana you would want to keep open for blue & black removal/counters, or creature flash ins.

I think Evacuation is a great piece of removal, especially for your strat that wouldn't mind replaying creatures for ETBs. I think disruption of tempo in a way is more powerful than outright killing a creature, since opponents now not only have to rebuild their boards, but then have to decide the best pathway for restructure. Removing a creature kinda streamlines decision making on how to recover and keep moving forward.

Looking forward to our next sesh my guy.

I was finally able to get it to where I want it thanks to your help :)

All great suggestions, I appreciate you taking a look. I still owe you a few deck checks myself haha.

Piglord98 ooh that looks like a better option than Plague Mare

Cool deck man, I've been playing around with some dredge/reanimator concepts & haven't really found anything that i really like yet but i do like your approach with Gruesome Menagerie + ETB triggers.

One card that seems like a great fit here is Gutterbones . It would basically be a less-extreme version of Narcomoeba in that it's not quite as good to dredge/explore (but still very good) while being much better from the opening hand. Also works well as repeatable sac fodder for Vraska. Your deck seems like it wants to aggro out to some extent so a t1 2/1 getting in that 4-6 damage off the bat can be huge.

I also feel like Isareth is really powerful here with the Explore creatures especially, and you could run 2-3 so it's more than just a toolbox option. Given how crucial recursion is to your deck, increasing the sources of that will help with consistency. In any synergy-dependent deck, I usually try to have at least 8 cards that can perform each core function.

Lastly, a sideboard idea that would be great against weenies or tokens is Plague Mare . I've been playing it as a one-of in a different deck (a weird Arisotcrats/Vannifar hybrid) and it is surprisingly clutch.

Nice deck man, +1. I've been working on a Yarok deck as well (Yarok's Toolbox). Mine is a little different as there are cards like Prime Speaker Vannifar and Finale of Devastation along with a bunch of 1-ofs so I can tutor the right ETB trigger for the situation.

One thing I might recommend would be to add some removal-creatures to your lineup like Ravenous Chupacabra , Hostage Taker , Cavalier of Night , and/or Plaguecrafter . Alongside Yarok, you can really devastate someone's board with these kinds of cards. A similar one that would probably be more of a sideboard card here is Plague Mare , which can be a one-sided wipe against weenies or tokens, especially with Yarok making it -2/-2. You also might want to run another copy of Yarok or 2 even tho he's legendary, since he will probably be a big removal target.

Awesome deck man, +1. I recently got back into Magic, and Vannifar also stood out to me as one of the main cards I wanted to brew around, so I've built 2 different BUG archetypes with her as a key cog. Since you've been brewing with Vannifar for a while I'd be interested to hear any ideas you might have.

The first (Neoristocrats) is quite a bit different from your deck, as it's mostly Black & uses a low curve with Aristocrats-style fodder creatures like Gutterbones & Orzhov Enforcer in order to generate value while pod-ing with Vannifar & Neoform or locking down the opponent's board with Priest of Forgotten Gods .

The second (Yarok's Toolbox) is much more similar to your deck, as it's mostly a Green ramp toolbox build. As the name suggests, it's more heavily focused on ETB triggers, but it's largely the same concept with a lot of the same cards, & also has some combo-style finishes. I really like what you're doing with the infinite turns combo tho, so I might have to think about working that in. Right now I'm using Gruesome Scourger +Yarok & End-Raze Forerunners as my big insta-win bombs.

Anyways, if I could give some tips for your deck, in general I have always found that "building around a card" works much more consistently if there are another 4-8 cards that can also synergize well with the cards that are designed to work with the featured card; there is only a ~40% chance that you will see a given 4-of in your opening hand, versus ~65% if you have 8 cards for a similar role. If you think about it in terms of a 3-game series, that's almost one extra game on average per series that you'll have what you need.

IMHO this is doubly true for Vannifar since she has to survive a turn on the battlefield to be used & is vulnerable to removal, so any strategy involving her needs some backup plans. For a Green ramp deck like this, I think the best pairing is Finale of Devastation , giving you much better odds of being able to utilize your toolbox when you need it, and making an immediate one-time impact in contrast to Vannifar's slower but repeatable ability. It also would give you the ability to get Vannifar or a non-CMC-friendly combo piece if you want to set up the infinite turns win.

Some other nice pod-ing options from my deck that you might consider are Plaguecrafter , Plague Mare , Exclusion Mage , Biogenic Ooze , Tishana, Voice of Thunder , and Dream Eater .