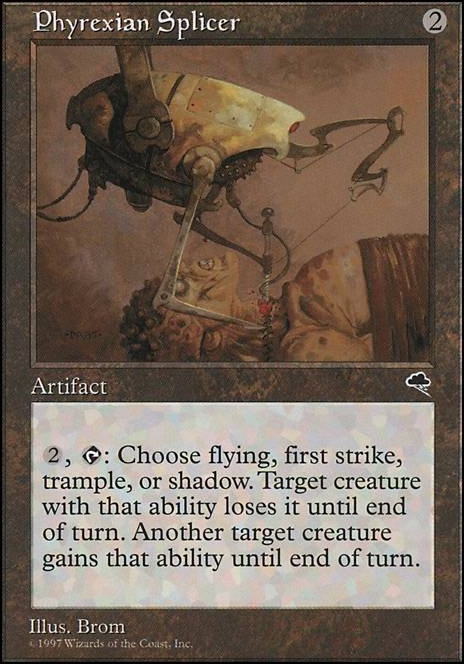 Phage: That Which is Not Dead
by Lazywing

Gidgetimer on Does Phyrexian Splicer require a ...

Rhadamanthus on Does Phyrexian Splicer require a ...

We have to go to the current official Oracle text to answer this. The Oracle text specifies that the first target creature has to actually have the ability you want to grant to the second creature. If it doesn't have the ability then it isn't a legal target for Phyrexian Splicer .

It's always a good idea to check the Gatherer entries for old weird cards to see if the text has been updated to clarify exactly how they're supposed to work.

rusky23 on Does Phyrexian Splicer require a ...

My understanding is that Phyrexian Splicer can be used to give a creature a choice of flying, first strike, shadow, or trample even if no creatures are on the battlefield with the chosen ability. I assume this is the case since the two parts of the ability are separate. I'd like a good explanation on why this can or cannot be done.

Phelddagrif, the Support, Who Supports Everyone

In addition to what other people mentioned, it's important to not just make people like you, but encourage people to do things other than attack you. I've been in games where people will thank me, but then turn on me later. If you include cards like Edric, Spymaster of Trest or Orzhov Advokist there's extra incentive to attack someone else.

For me a large part of group hug decks is getting political. By this i mean you help out people in exchange for them helping you and helping take out other player you deem scary. You can go beyond that and directly barter with people too. Telling people you will use your Phyrexian Splicer, Duelist's Heritage, or Power Matrix if they attack someone other than you is always nice.

If however you want to stay truly group hug and ignore the political aspect of it, i'd add more ways to directly give people more options with cards like Wishmonger, Intellectual Offering, Benevolent Offering, Sylvan Offering, Collective Voyage, Tempt with Discovery, Tempt with Reflections, Alliance of Arms.

Avacyn, Guardian Angel can also help your opponents or save yourself if needed. (vigilance is also nice cause you can still attack someone if needed)

You mentioned in your last comment you said you really enjoy ridiculous decks. While it isnt exactly group hug, Knowledge Pool, Eye of the Storm and Hive Mind fit that description pretty well.

Thinking about a Jiwari-Deck atm, too. I think you can give Phyrexian Splicer a try to take off Flying from creatures you want to target and give it to yours =)

Making some serious changes. Forget Looter il-Kor and Phyrexian Splicer, that's way too complicated. Kudos to the dude that suggested that but I feel so darn foolish for not taking this the easy way out. Etched Champion has protection from all colors when I control three or more artifacts and that means, nothing but artifact creatures can block him. Master of Etherium and Steel Overseer will provide me with beef for defense and more, and Dispatch and Unsummon will give me the ability to remove immediate threats.

Fabricate has replaced Ponder for the time being but I will likely put at least two Ponders back in because they allow me to draw for one mana. They are however banned and maybe I feel like following Modern rules, even though I only ever play casual. That said, the finishing touch is Cranial Plating. If I attach that to Etched Champion he'll be able to swing for ridiculous damage.

I seriously don't know why I didn't take advantage of that earlier. Cranial Plating is pretty much perfect, and with support from Steel Overseer, my Etched Champion will tear the opponent to shreds within two or three turns.

I also love the idea of giving Shadow to a pumped up Master of Etherium using Phyrexian Splicer. I never would've thought of that because I didn't know of those cards until now XD

Kind of a janky solution but this is casual fun, yes? Looter will give you a little more draw/filter, and gives Splicer a target with shadow for bigger beats, and Splicer can give you more unblockables (and can even target E-Champs unlike Slip Through Space and Distortion Strike) It can also help to deal with flying issues the Blades Pinions were addressing, although more mana intensive than the equipment.

Lotus petals, borderposts and temples should suffice for your needs I would think...making Ancient Dens just added value for artifact count...not really for the itself. Darksteel Citadel with ensoul artifact are much scarier than lotus petals...though dropped a turn later.

I can't guarantee results, but I think this would run a little faster, and at the very least more entertaining than your current build (Which I like the by the way). To me that's high value for $7.00-ish worth of cards :P

Lastly ... Cranial Plating too unfriendly for your casual group ? (that's the only reason I can imagine they're not already in the deck) If not maybe drop another 1x each of; ponder, whispersilk & unsummon for 3x of these too ?