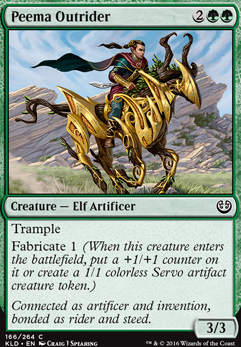 Fabricate 1 (When this creature enters the battlefield, put a +1/+1 counter on it or create a 1/1 colorless Servo artifact creature token.)

Marwyn, So I heard you like elves.
by ThreadbareGoblin

The simics are at it again
by TonyMestre 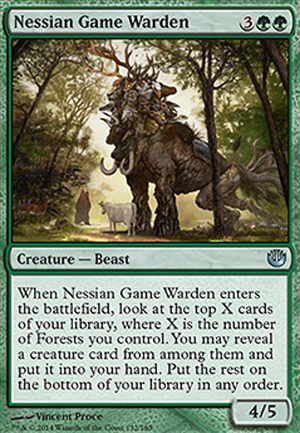 No CoCo to top the curve? I also wonder if you can find the value if you don't draw into Hardened Scales, or if you just burn your hand playing mana dorks. Hard to tell, it's the kinda deck I'd want to play before making many suggestions. Either way, Metallic Mimic and warrior elves...pretty tech.

Some shitty cards I might throw in for funsies: Peema Outrider, Armorcraft Judge, Simic Guildmage, or Talara's Battalion.

Hey djnewellmit, our decks do fold to Fatal Push, but so do just about all decks in Standard. A double Push opening hand from our opponent is very hard to come back from. One way to get around Push is to play more 3 drops since requires some work from our opponent to first trigger revolt which is actually difficult to do. This is one of the reasons I'm a big fan of Rishkar, Peema Renegade.

I would prefer to add more 3 drops than 4 or 5 drops because I still want to keep the mana curve low. You mentioned Tireless Tracker who's a great suggestion. Tracker can be incredible I'm currently playing three in the sideboard, but I could see her being an excellent main deck addition. It's possible that I should switch Narnam Renegade and Tracker around between main and sideboard. Both are excellent in the Golgari Constrictor matchup which is the reason I'm main decking Narnam. Narnam brings some added aggression which I like since him turn one into any 2 drop into Rishkar brings the beats.

Due to the way my three color manabase is built my removal options are very limited to just Push, making Grasp of Darkness in my opinion not a viable option because of the double black in it's cost. Botanical Sanctum is the problem I could replace it with Evolving Wilds, but this slows down the deck a lot and is not what I really want when using so many 2 drops. Noxious Gearhulk and Ob Nixilis Reignited are my sideboard removal answers to big creatures that are out of the range of Push. I don't need them until later in the game where double black is completely doable, but in the early game it's not. I feel 4x Push main deck, if you have them, should be the norm.

I like your suggestion of combating Push with Woodland Wanderer there's also Peema Outrider who goes more with the Elf theme. The problem is finding room for these creatures main deck or even sideboard. Aethersphere Harvester also plays a similar role like these creatures. It doesn't die to Push without a revolt trigger and it survives Grasp. It has the added benefit of being a great way to gain life with lifelink. I'm a big fan of Harvester and after sideboard I can go up to three copies of it. I recommend you add it main deck or sideboard because getting counters on it from a Rishkar or Verdurous Gearhulk makes it even more amazing and resilent. With Mimic gone the counters strategy is now on the shoulders of both Rishkar and Verdurous. Creatures that enter the battlefield or can make their own counters with an ability are very good because they can get bonuses from Winding Constrictor without needing other cards.

One of the best things going for this deck is it's ability to keep up with other decks or overtake them with board position in gameplay. Using a very low mana curve made up of mostly 2 drops who are all powerful for their two mana costs. I've taken a different approach after cutting Mimic without it Armorcraft Judge loses a lot and has also been cut. Using Mimic with Winding Constrictor I was finding that some set-up was required before playing other cards. This took away from the aggression. Ignoring this set-up now and just focusing on playing these great 2 drops getting them on the battlefield and being aggressive with them simplifies the strategy. I've cut all main deck draw instead putting it all in the sideboard. This might be a mistake, but I've done this to keep the curve as low as possible for game one of a matchup.

It's possible that Metallic Rebuke should be playing a bigger role here like you suggest. Being able to counter a turn five Verdurous from my opponent in the Golgari Snake matchup or turn four Gideon, Ally of Zendikar in Vehicles seems very good and a huge swing in my favor. I haven't really explored the possibilities with Rebuke it's really here for the Saheeli Combo matchup and Torrential Gearhulk Control matchups.

Metallic Rebuke got worse with the cutting of Metallic Mimic because he's fine in control matchups because he's an artifact which can get into play as early as turn two. Having 8x possible turn two artifacts, 4x Mimic and 4x Walking Ballista was very good to improvise Rebuke early. Rebuke is still amazing even with Mimic gone because of it's synergy with Ballista, Aethersphere Harvester and Tireless Tracker. Although Tracker is by far the slowest of the options to get an artifact into play. Choosing to main deck Rebuke is fine option and it would for sure help to give more uses for Mimic if you're using Mimic.

My main suggestion for making this deck more effective is prioritizing. Your deck will run much more consistently if you have less 1 ofs and putting 3 or 4 of cards that really help your deck, so you're more likely to draw into them when you need them.

For example, Yeva's Forcemage, Peema Outrider, Embraal Bruiser, and Harvester Troll don't seem to do a whole lot for the deck. You'd be better off running more of things like Bellowing Tanglewurm.

As for some suggestions of things you don't have yet, I can tell you like casual, so I won't get too in-depth with super-competitive combos and things. If you like Ring of Xathrid, consider Ring of Kalonia. If you have both on a 2-color creature like Lord of Extinction, the ability will stack and it will grow even faster.

On the subject of 2-color creatures, I really like Creakwood Liege for this deck, he'll boost all your creatures and make even more creatures to boost. His ability will also stack for 2-color creatures, giving them +2/+2. Baloth Null is also a solid budget card. Works as a big creature, and gets back some of the creatures you're sacrificing.

I don't think Predator's Gambit will help you much, because in testing I usually had several creatures out, but there are plenty of solid enchantments to replace it with like Gift of the Deity or Aspect of Gorgon.

Hey CloudThumper it's been a while. I'm very happy with the wealth of Elves in Standard right now. There's so many that not all of them can go in a single deck. There's also tons of good/great build around cards for Elf strategies and support cards to strengthen strategies. This is exciting and a welcomed change in Standard. I playtested about 10 different Elf decks of varying color combinations with different build around cards and strategies. Golgari so far has been the best, splashing blue for Skyrider Elf brings some added fun.

Several of the best Elves this time around are expensive options with Rishkar, Peema Renegade leading in price and he will most likely go up more. Metallic Mimic is also not a budget Elf and Sylvan Advocate while more budget then the others is on the cusp. Expensive Elves is not a norm when it comes to Standard, but to get the power level of Elves to increase I guess price must also increase.

Of the Elves you mentioned I like both Ajani's Comrade and Cultivator of Blades as Elf options for budget brews. I'll most likely use both when I update Budget Energy Elves. Comrade's trample does seem very good with a +1/+1 counters strategy.

I playtested a Temur Energy version of this deck using Aetherwind Basker as the win condition. It's splashing red for Spontaneous Artist and Harnessed Lightning. Artist is great with energy because he can give Aetherwind haste for only one . Giving other Elves haste such as a huge Skyrider Elf is also nice. It's a fine version, it's fun, but I've found energy as the main and or only strategy to not be as powerful as +1/+1 counters.

If you recall the first version of Energy Elves played both Skyrider Elf and Woodland Wanderer with Servant/Sage/Attune/Hub/Lightning as the energy producers. Wanderer is a real beast, but I ultimately cut him in the version for Peema Outrider for more Elf synergy.

Thanks for the feedback BlaineTog! With some of the testing I've done, I agree that there should be some more creatures and fewer lands. Next iteration will probably be around 22 creatures and 20 lands. For the suggestions: 1) I will try replacing both Lifecrafter's Bestiary with 2 copies of Armorcraft Judge. The scrying has been nice, but the extra draw(s) don't happen as often as I would have liked. 2) I'm thinking of swapping out the one copy of Ridgescale Tusker for a Cultivator of Blades. The Tusker can be a dead draw/play with an empty board, where the Cultivator can at least provide a couple of chump blockers. 3) While Lifecrafter's Gift is expensive, it has been useful. I'll try cutting them down to 2 copies, and replace them with 2 Peema Outrider. 4) Sylvan Advocate had slipped my mind, since it didn't add to the counters-theme of the deck. I'm thinking that since the deck isn't the best at triggering revolt by itself, that I can swap out the 3 copies of Greenwheel Liberator with the Advocates. 5) Nature's Way will definitely do some work in this deck, but like you said, it's hard to figure out what to cut. I'll probably go back on my word and cut those last 2 Lifecrafter's Gifts for now and see what happens. Again, thanks for the feeback!