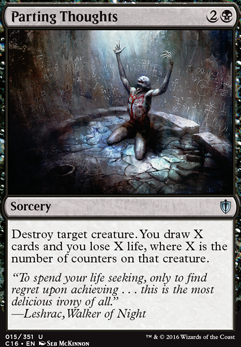 Destroy target creature. You draw X cards and you lose X life, where X is the number of counters on that creature. 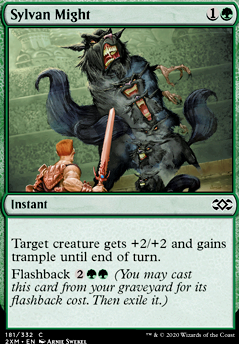 Her thorns draw blood
by Phosphene 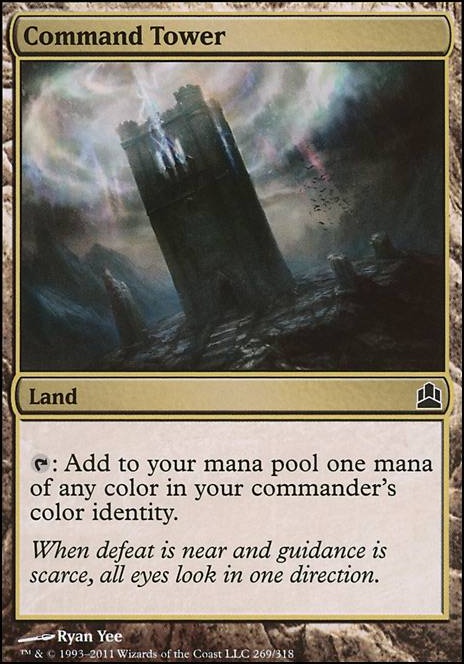 So if draw still feels lacking, what are your thoughts on I have personally had plenty of success with Parting Thoughts and Hunter's Prowess . The latter is a semi-expensive cmc-wise and I already know it isnât exactly your play-style but I feel like I should suggest it!

Heroic Intervention is a great card but I agree with how you feel about it in this deck. Seems very eh in most scenarios, but I still think the other twoâ Inspiring Call and Rishkar's Expertise certainly have a place here.

I certainly agree with your decision on Beast Within . Also, love the idea of Dolmen Gate . I would test the waters with that one before totally committing on it.

I really really like Collector Ouphe (I just popped one myself!). Adds a nice stax piece to this aggro deck. Also, Shizo is a must-add. Something I would definitely do if I went and bought one. And I am all for keeping Prowler's Helm and Trailblazer's Boots .

I agree with Scheming Symmetry . I need to pick up up one of these!

Iâd rank Rite of Passage higher in this particular deck over Evol and Drana. The reasoning is it gives opponents another reason not to block Skullbriar. âOh heâs just going to get bigger?â And in most cases for me heâs the biggest creature on the entire board so heâs a force to be reckoned with. And if people choose to block him when he has no trample or evasionâheâs at least getting slightly bigger at the same time.

YESâUrborg and Filth. Couldnât agree more with those.

Buddy of mine played Ghave all the time and it was always a threat, so good commander choice! +1

Your explanation for a lot of pieces is very deep and thorough so I get it if some of these suggestions I give you donât make your version of the deck.

Iâd think Forgotten Ancient is an auto-include. People play spells, he gets big with counters and then you even have the option of moving them onto Ghave or another creature on the board. A good counter-engine if you will.

Opal Palace is a dope budget land and a rather great pump spell late game while at the same time providing mana of your commanderâs colors if youâre having trouble in certain scenarios. Thereâs also Llanowar Reborn and Oran-Rief, the Vastwood for other land choices.

There is Armorcraft Judge and Parting Thoughts of you need some help with draw.

Rishkar, Peema Renegade is another version of your planeswalker you already have. Not sure if youâd want another?

And last but not least, you can always run more Dictate of Erebos with something like Grave Pact but I dont know if you are on a budget or not. I personally like running both enchantments in any of my sacrifice decks, but maybe not everyone does!

Hope some of that helps! And again, awesome list!

Just a few ideas without any justification:

Hey great looking deck! Got s few suggestions for ya... Strionic Resonator can double his counter distribution trigger or even a "bounty collection" trigger. I agree Queen Marchesa would be great in the 99 of this deck. If you need more control and pillow fort cards maybe try War's Toll, Archangel of Tithes, Lightmine Field, Do or Die and Parting Thoughts. Then there's Diaochan, Artful Beauty, who is basically a wild card. It could survive a while and be insane if you can make allies, or it will die right away but you should collect at least one bounty no matter what. Maybe you want to be in charge of combat to control the board and force bad blocks with Fumiko the Lowblood, Goblin Spymaster, Boros Battleshaper, Master Warcraft, Odric, Master Tactician, and Brutal Hordechief. I love the idea of using curses too especially Curse of Disturbance and Curse of Shallow Graves since you don't mind extra creatures floating around. Happy gathering!!

Nice deck! Got a couple ideas for you.. I'm a big fan of Duelist's Heritage over Battle Mastery... Sword of the Animist is great in non green decks especially Voltron style ones... Inspiring Statuary is great with lots of equipment cards... I like effects like Dictate of Heliod over aura pump spells here since you have so many small value creatures, plus a bunch fly. Nykthos, Shrine to Nyx can get crazy in 2 color decks. Also I feel like you could use some big card draw spells. There's so much black card draw out there that uses life loss as a drawback that you could probably some no problem. Skeletal Scrying, Phyrexian Arena, Parting Thoughts, Ambition's Cost, Ancient Craving, Graveborn Muse, Minions' Murmurs, Moonlight Bargain, Necrologia, Promise of Power, and Underworld Connections... That's more than you need, but i would pick a few of them...Alhammarret's Archive is great in life gain but it's better with card draw effects... also Rhox Faithmender & Boon Reflection for more life gain doubling. Happy gathering!

Hi, its always good to see new faces around. First things first, Parting Thoughts is unfortunately not a modern-legal card- it shows on the bottom right hand side. Modern equivalents are things like Momentous Fall,Fruit of the First Tree Take, Tezzeret's Gambit, Fathom Mage, Greater Good, Life's Legacy, Soul's Majesty etc. Still, it should be a straightforward swap, even if its not removal. I'd reccomend looking around at other decks that use landfall effects and counter effects- they tend to operate on different principals, one running Terramorphic Expanse or Wooded Foothills type cards for a quick burst of damage, and the other runnning lists like this thing I threw together Mono green county to play aggressively.

Modern as a format has been shaped by the presence of fast, powerful cards like Scapeshift, Lightning Bolt or Death's Shadow, meaning most games are won or lost by turn four. If you find yourself playing in a competitive environment, just run a full set of Duress, Despise and kill spells like Vendetta- it'll be relatively cheap and hopefully stop your opponent for long enough to achieve a strong board state with Armorcraft Judge and Ridgescale Tusker. The two concepts to keep in mind are 'card advantage' and 'tempo'. Basically, card advantage is 'can I use this card to take out two of his, so that you have more options overall than your opponent style, and tempo is 'can I trade all my cards for damage before my opponent can stop me'.

Playing casually on the other hand is a lot more relaxed, if you're playing with a small group and small number of decks, try to trade for variety in your setup- its no fun if all the games turn out the same way, and the slower play is a lot more forgiving. Optimise to match the power of people you're playing with, otherwise noone will want to play against the deck. People will put up with a couple of dumb turn four wins, but don't try to do that every game, even if its possible. I'll reccomend you focus on making sure your lands are reliable- while competitively Sylvan Scrying is usually used to fetch tron peices (Urza's Toweretc) it will work well enough to fetch lands, though Rampant Growth, Harrow, Khalni Heart Expedition, Kodama's Reach and other cards that put lands onto the battlefield will likely be more practical for now.

Also, you should include Vinelasher Kudzu, its pretty hilarious.

The most important thing is to playtest before going out and getting things, and have fun.