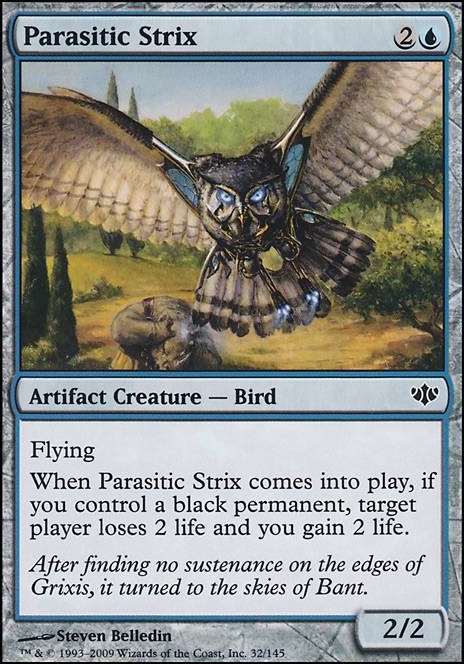 When Parasitic Strix enters the battlefield, if you control a black permanent, target player loses 2 life and you gain 2 life.

Ramses the ruthless
by Feyyore

You can use Memory's Journey as a loop outlet, recursion as well as incidental grave hate, which checks all the boxes Twister has, save for the massive card advantage. If you want a wheel effect instead, Windfall or something similar will do. I would not recommend replacing the slot with Echo of Eons or some other "budget" Twister, as their applicability is severely limited by their mana costs and exile clauses.

Parasitic Strix does work as a kill card here, but the deck as-is tries to adhere to a common cEDH standard of including as few "win the game" cards that don't do anything else on the side as possible. Right now, the list runs Finale of Devastation and the Words of Wind + Yarok's Fenlurker win outlets, as those have other uses aside from being wincon cards. The only exception to this "utility wincon" rule usually is Laboratory Maniac , as the card is an extremely powerful combo piece with cards like Demonic Consultation and Tainted Pact , a win line that goes through a lot of hate with minimal mana investment. Despite all this, you can still run Strix here if you want to, it's just that the card slot it inhabits finds uses for other utility quickly.

enpc on Any advice? Thrasios / Tymna ...

Aluren is a bit of an interesting card with Thrasios as he works best as a mana sink, however Aluren combos don't typically generate mana. For this reason it could be worth adding cards like Cloud of Faeries and Village Bell-Ringer to help generate mana to then use Thrasios to dig.

Out of curiosity, have you thought about using Vial Smasher the Fierce over Tymna? if your deck is built around ETB, red gives you a lot of good options like Impact Tremors, and you can include cards like Animar, Soul of Elements as a backup line, as well as Kiki-Jiki, Mirror Breaker combos.

Azdranax on Any advice? Thrasios / Tymna ...

I impulse bought an Aluren because I really like the card and now I need a deck to play it in. I spent the last day or so putting this deck together: I sees a Harpy, an' a Strixy. It definitely seems like it's on the right track, but I'm sure it could be improved.

It's on a semi-budget. I already own a lot of expensive pieces like the lands, Force, Top, Library, Recruiter, etc, but some cards that would be really good such as Vampiric Tutor are a little out of my price range at the moment. The cards in my maybeboard listed under Upgrades are cards I'll be getting when I can.

Right now I have the classic Aluren + Parasitic Strix + Cavern Harpy combo, as well as backups in Devoted Druid + Vizier of Remedies and Aluren + Cloudstone Curio + Parasitic Strix. Are there other combos that I should be running? Is it worth playing Kalastria Healer in case I lose Parasitic Strix? At the moment Parasitic Strix is my only way to win the game. I don't want to use Flash Hulk or other self-mill combos. Are there better cards I should consider? Do I have enough lands? Should I have more interaction or should I play 'combo or bust'? My playgroup (when playing this) will consist of competitive players with focused decks, but not cEDH. I'd like this to hold its own a bit in a cEDH setting, but this definitely doesn't need to be quite cEDH. Finally, I'm a bit skeptical of Tymna the Weaver. I don't have many attackers and I will face quite a few decks capable of making much bigger creatures that can block. Would Ravos, Soultender be better? The recursion seems good in the face of removal (especially boardwipes). Any general advice is welcome.

Once again, the decklist:

I sees a Harpy, an' a Strixy

I have considered Survival of the Fittest, and it would probably be good enough to run in place of Uncage the Menagerie, which has turned out to be rather disappointing. Aluren I'm not as sure, because I don't need to play a very large amount of creatures in a single turn, like with the classic Cavern Harpy + Parasitic Strix combo, and the Aluren effect would be too symmetrical to really get more advantage out of it than my opponent.

Looking to complete my 4c Aluren deck, do you like FREE STUFF?. I need, in order of most to least important:

I have a binder full of value, including Invocations, Glimpse the Unthinkable, eternal lands like Dryad Arbor and Dark Depths, etc. :)

Additionally, I would be interested in trading for the following cards that I already have but would like another copy:

These are lower priority than the top.

Comment here or on my binder with interest! Thanks!

Building another EDH deck, this time it's Elves PLUS Prossh, put together! (Quiet list plug: do you like FREE STUFF?) Need help with some of the missing cards.

I am especially anxious to get the two partner commanders!

Here's my binder. There's only a few things in there I'd be reluctant to trade for the above pieces. There's value up and down in there, I promise!

Comments below or on my binder please!

So, from what you have currently listed, I'm interested in the following:

I am also interested in the pack foil Qasali Pridemage over the promo one if you have it. I would heavily prefer to trade, but am not opposed to finishing out the trade with a few bucks if need be. LEt me know if we can work something out, thanks!