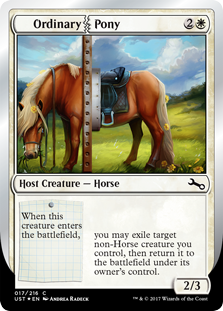 When this creature enters the battlefield,

Welcome to The Silver Showdown! This is a box set for 2-5 players to allow for silver-bordered Commander games. If you've ever seen someone's Commander Smash Up set, the same concept has been applied here. If you haven't:

There are ten 50-card decks consisting of a Commander and 49 other cards. They are:

Etiquette For Being A Proper Host

Roll With the Changes

THAT'S A LOT OF NUTS!

Assume that every Commander has Partner.

The decks can be randomly dealt out or snake drafted.

After you get your decks I really recommend reviewing them before shuffling up. If your position is "I ain't a coward" and you just go for it then I won't stop you but there's some oddball cards in here.

Additionally, there's another houserule in place. I have two complete sets of Contraptions, and before we get started the Contraption deck gets shuffled up and put in the middle of the table. At Sorcery speed (your turn, stack is empty) you can pay 1+1 for each Contraption you have to Assemble a Contraption.

If you've never had the chance to play with Contraptions:

-Contraptions live in the Contraption Deck until they're played.

-If they leave the battlefield, they go to the Scrapyard instead of anywhere else.

-When you Assemble a Contraption you attach it to Sprocket 1, 2, or 3.

-On your upkeep, move the Contraption to the next Sprocket (starting on 1) and then you may Crank any number of Contraptions attached to that Sprocket.

You may ask, "Why not just make a silver-bordered Commander deck?"

"There's also a consideration of power level. Many silver-bordered cards, even if they are quite fun, are not up to the same power level as even casual groups. It can be difficult to feel like you're making an impact on the game. While bringing preconstructed decks does take away the self-expression aspect of Commander, I'm hoping to balance the decks to each other."

The intent is to create games of full of silver-bordered interactions, but fairly matched up. Big turns and attacking opponents are encouraged. Infinite combos have been intentionally avoided. Assist spells from Battlebond and the "friend or foe" cycle are included to encourage helping other players out and cutting deals. Also in favor of the game experience, there's three lists: The Notably Absent, The Notably Observed, and The Notably Considered:

Rules Lawyer and Staying Power: They're together because they're on this list for the same reason. I appreciate both of these cards but here's the thing: Even when everyone is playing serious Magic and trying to enforce all the rules as normal, stuff gets missed all the time in Commander. Replacement effects that don't do anything for four turns get ignored. People forget that extra buff that meant their creature would've lived through that combat. It's never a feeling I've enjoyed having and so I don't see trying to have everyone selectively ignoring rules adding fun. Now, Really Epic Punch is in the decklists, but that is an issue of scale. +2/+2 can be represented easily. Staying Power is even fine in two-player Unsanctioned. But I don't see it scaling up better.

Clocknapper: I was fortunate enough to never play with or against this in Unstable draft, but it frequently appeared in the games next to me, and it was always a downer when it resolved. I'll just as soon avoid Clocknapper than worry about every effect that involves bouncing or flickering leading to an infinite turns win.

Half-Squirrel, Half-: The trigger here is on everyone's nontoken creatures entering the battlefield. That is something that can scale out of control quickly in a four-player game.

Ordinary Pony: I very nearly cut Ordinary Pony to break up the Half-Squirrel, Half-Pony combination, but decided to give them a chance. Depending on the trigger, repeatable flickering can get out of hand real fast.

Q: What are these black-bordered cards doing here?

A: Okay first off, the White Knight and Black Knight are the white-bordered 5th Edition printing so they trigger Border Guardian.

The real answer is playability. But the overriding principle, the guide line of the set, the "What Would Richard Garfield Do?" (cast Fork on Shahrazad) line of the set is: Black-bordered inclusions exist to support the silver-bordered cards, not to supplant them.

A: Cheatyface can be in any Blue deck. Entirely Normal Armchair can be anywhere. Before I put the decks away I'll flip them face down and randomly choose a deck to shuffle them into and then not really think about where I put them at all. You're highly encouraged to look through your deck before playing. Besides, Cheatyface making himself the 51st card seems more fitting.

Q: Why only in the Blue decks?

Q: Don't you know The Grand Calcutron isn't a creature?

A: Check the Gatherer! It has been officially declared that The Grand Calcutron can be your Commander.

Q: How do and The Grand Calcutron work?

A: I have odd-number dice. Make my day.

Q: Why no Enter the Dungeon?

A: I like The Countdown Is at One more.

Q: How do you separate the decks out?

A: Multicolored Sharpies. Put two dots on the front of the sleeve to show which color pair the card belongs in.

Q: Where do you go from here?

A: I'd really like to look at getting more Playtest cards to include. Since I have blanks I can sleeve up, something like Gunk Slug would be easy to include. There's also some more silver-bordered cards like Letter Bomb and Jalum Grifter that I didn't really think about until after I'd resolved to stop ordering cards.

I am starting to build my own Dr. Julius Jumblemorph EDH Deck. I really like your squirrel Sub-theme, might add some of that as well in my deck :)

I dont know if you have seen the combo yet, but if you want to power up the deck you could add some tutors so it would be easy to play the host-augment combo of: