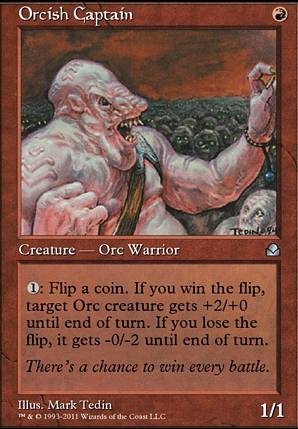 A sock of quarters
by codeskin

For a cutthroat deck, drop all of this, run the one Orcish Captain&Frenetic Efreet as well as all of the tutors to find them, run a bunch of low-mana rocks, card draw, removal, and countermagic and build an aggressive combo deck.

Yeah, a little difference in wording, and a huge difference in effect. Orcish Captain requires an lot of mana, but is an effective ": Flip X coins, draw a card for each coin flip you win, sacrifice this creature if you lost a flip." as long as Zndrsplt, Eye of Wisdom is on the battlefield.

Orcish Captain also can be used like Frenetic Efreet except you have to pay one, which means it isn;t nearly as good, but for one mana I still think you can pay 5 and flip five coins, you know!

Telepathy and Deep-Sea Kraken I do not see helping the deck have a better chance to win the game. Telepathy is sure to slow down a game and bring you some strong table hate in my opinion.

Laboratory Maniac as another win con with Frenetic Efreet

Fabricate , Muddle the Mixture or to go find your Thumb?

Fling , Warp World and Disrupt Decorum I would think would be a better fit than Telepathy and Deep-Sea Kraken. They keep up the Chaos theme.