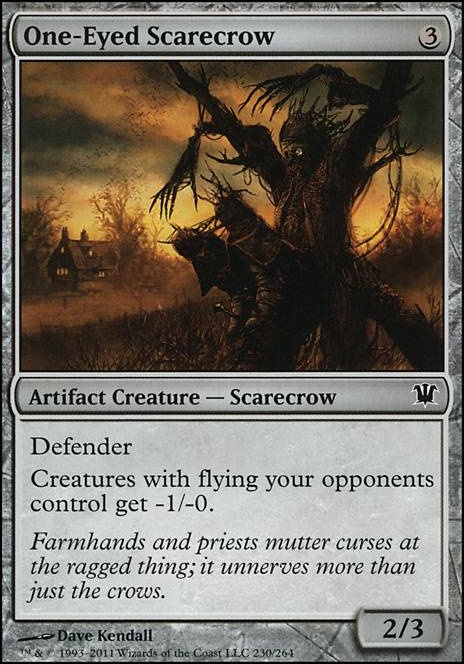 creatures with flying your opponents control get -1/-0.

First I suggest taking out all the artifact banners and replacing them with some other mana rocks like Fellwar Stone, Chromatic Lantern, Manalith, Hedron Archive, Thran Dynamo, or Expedition Map.

Some good cards for your Scarecrows/because of your Scarecrows are Kindred Boon, Padeem, Consul of Innovation, Bringer of the White Dawn, Sun Titan, Master Transmuter, All Is Dust, Darksteel Forge, Conjurer's Closet, Scourglass, Mechanized Production, Call to the Kindred, Descendants' Path, and Saheeli Rai.

Sidran7e on Advertise your COMMANDER deck!

Here are some hopefully budget recommendations for this deck.

Wrath of God with flying creature tokens: March of Souls.

Benefits for having flying creatures: Archon of Redemption and Serra Aviary.

Also, since Forsaken Sanctuary, Nahiri's Machinations, and Spectral Shepherd have mana symbols that aren't just white or colorless in their rules text, for EDH/Commander, they don't have a white color identity, and so they can't be in a deck with Radiant, Archangel as the commander.

Ghost Town and Mage-Ring Network don't seem too useful in this deck, but if you are looking for storage lands that give white mana, Icatian Store and Fountain of Cho seem like better options. Also, while the art for Serra's Blessing is amazing, I think Brave the Sands would be a better option.

With the return of the Madness mechanic, what about the cards Gibbering Descent, Magus of the Bazaar, Skirk Ridge Exhumer, Skirge Familiar, and Civilized Scholar  Flip? Other Innistrad-related things include Nefashu, Illusory Demon, Tyrant of Discord, High Priest of Penance, and One-Eyed Scarecrow.

Actually, as stated on the "Cards" section, she's "Essential as the Reaper King". This deck does not work without her... well, maybe it may do in a way, but in a really crappy way. Remember that she's not only here to bring back the straw guys, but also for the card drawing, scarecrow sacrifice (which is the same ability, but depending on the situation, one part may matter more than the other).

Being a scarecrow, she comboes with the King too, both the vindicate, and +1/+1. Also even with herself if two are on the battlefield. And with every other artifact combo here. So no, please don't remove her.

On the other hand, you may want to take the Painter's Servants and Lurebound Scarecrows away, taking some options from the maybeboard. Those are the other scarecrows that are good enough. I find the rest of them to be useless, too situation-dependent, or pure crap. (even though the art is amazing).With those in the Maybeboard, you can try to make a flying army in order to compensate with the lack of strenght: One-Eyed Scarecrow, Pili-Pala, Watchwing Scarecrow, Wingrattle Scarecrow. Thing is, this last two are not good without colored permanents. On the other hand, Lockjaw Snapper is a pretty acceptable scarecrow by himself to consider.

Academy Ruins can be easily taken away to reduce budget as well.

Also, sorry for the late response, been pretty busy lately, and wanted to explain as exhaustive as possible.