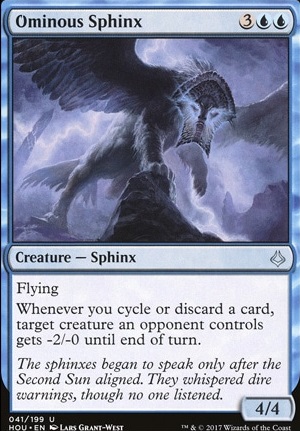 Whenever you cycle or discard a card, target creature an opponent controls gets -2/-0 until end of turn.

The Sphinx: A Menacing Mystery
by Ravenrose

Stop in the name of the law!
by MasterKLSX

Thank you sixokay for the feedback! I think I'm going to take out Ominous Sphinx, but if you think anything else should be taken out let me know.

I'm not sure I want to muddy up the mana pool with another color, but I do have my eyes on Dowsing Dagger and Spell Swindle for ramp.

The Dagger isn't as slow as it would be in other decks because everything on my side has flying including the Riddleform which would be activated and ready to attack when playing the dagger. Your opponent gets two useless plants that can't attack and don't have Reach to block you. This means on turn 4 you can play it, attach it, attack for 5 in the air with Riddleform, then transform it for a bonus 3 mana tapping land. Ridiculous. It's not legendary on either side so I won't even hesitate to add 4 of these.

Swindle is a sweet counter spell for this deck that basically drains mana for incredibly useful and tangible ramp that doesn't just empty with your next main phase like Mana Drain. Obviously it's not a threat until turn 5 or later, but this deck should typically make it that far. I can see a pair of these easily fitting the deck.

I am hoping to see a new Sphinx since at least one seems to make it into every block, but Ixalan might be too Tribal around Dinosaurs, Pirates, Merfolk, and Vampires for that. We'll see. I will have 4 creature slots to fill and I don't really want to use Ominous Sphinx if I don't have to. Nimble Obstructionist is a good candidate for aerial shenanigans.

Wow good call on Servant of the Conduit really good call. I would have never put that in. Also... maybe only maybe put some more cards that get advantages from cycling like Zenith Seeker, Ominous Sphinx, Drake Haven, Compelling Argument, or even Beneath the Sands to get through your deck easily and so you don't miss out on the lands you need.

haakon and undead gladiator wil be big of help if u want to do stuff with the graveyard in any way. stil draw power would be also suggested in this deck. cards i aint a fan of - Rise from the Grave- Kefnet's Monument Oath of Ghouls - Grave Betrayal - Talrand, Sky Summoner - Ominous Sphinx - Woodlot Crawler - Deathbringer Regent i can delete a lot more bt that i wouldn't play at all in this deck

greyninja on What are the best cards â¦

If youre talking strictly prerelease; I'd say don't plan your strategies around the rares and mythics. You're guaranteed 7 rares/mythics (more so if you pull pack foils), but that doesn't mean they're auto-amazing or even all the same colors/mechanics

Creatures with evasion are always good. Dauntless Aven and Aven of Enduring Hope are solid. Ominous Sphinx is good regardless of how much cycling you're doing. Overcome will win games. (Looks like we're missing some cards in the database)

As Argy mentioned: Eternalize will be powerful in limited. Proven Combatant is a fantastic turn 1 play that comes back again later.

You always want removal at prerelease, hopefully ~8 pieces if you're lucky. Amonkhet in general doesn't have much to choose from compared to other blocks imo. Take what you can get. Sandblast gets rid of a lot of creatures. Desert's Hold is really good since there isn't much enchantment removal. Unsummon is an incredible tempo play. Red has some burn, black has some -1/-1 shenanigans, and there's some great multicolor aftermath cards with removal

I don't play standard - I'm more of an edh guy - but I'm stoked to attend 2/5 prereleases this weekend! Good luck everyone!!!