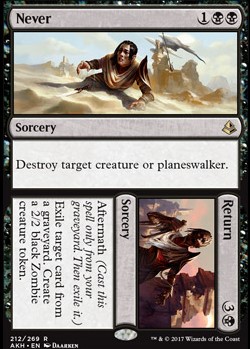 Never / Return occurrence in decks from the last year 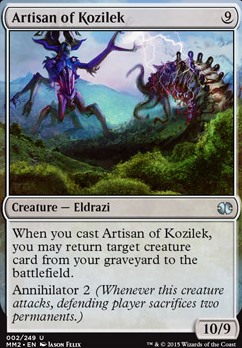 What types of decks do you usually play against? Knowing that will help people give advice. For some general tips, I would cut all of the "standard" cards that you're playing right now because most all of them are too slow, not powerful enough for modern, or have better versions of the card available: 1 Dusk / Dawn , 2 Fumigate , 1 Ironwright's Cleansing , 2 Never / Return , 1 Decommission , 2 Gideon's Reproach . I would also cut the 4 Authority of the Consuls , but they could be reasonable depending on what you play against. In their place, you should play some of the Modern "Staples" as they'll help increase the competitivity of your deck (look up modern staples if you don't know what I'm talking about). In your colors, Path to Exile is the most important considering the current meta. 1-mana discard spells such as Inquisition of Kozilek and Thoughtseize are played in virtually every deck that plays black; they'll give you an edge against control and combo and are still very useful vs aggro and midrange. The downside of those staples is that they cost a lot of money. If that's a trouble for you, I can suggest some other cards that are at least semi-competitive, though again it would help to know what you play against.

If you really like gaining life, take a look at a Martyr Proc deck (example: Martyr Proc). Martyr of Sands can gain you huge amounts of life starting turn 2, and it works quite well with Squadron Hawk . It's easy enough to slot in a few Gideon of the Trials and Brisela/Bruna in place of some other cards, and it gains a heck ton more life than the deck you're playing now does.

Another way you could take the deck is a B Devotion deck to make use of Gray Merchant of Asphodel . That deck has cards like Vampire Nighthawk , Gifted Aetherborn (which you already have), and Gatekeeper of Malakir . It could make casting Gideons and Brisela/Bruna harder though.

I would change Murder for Never / Return , they do the same, but the later can affect Pw and gets recursion. Diabolic Tutor would also go in place of Mastermind's Acquisition , and would replace some copies of Alms of the Vein with Ill-Gotten Inheritance .

Gutterbones could take the place of Vampire Cutthroat , I would add + Vicious Conquistador and remove one Skymarch Bloodletter .

Side boarding some âHand Destructionâ and âRemovalâ spells would be a good idea as well.

Some of the things I would consider removing are: Never / Return (there is much better instant speed removal in black green), Gravedigger (there are less mana intensive ways to get this effect), Glowspore Shaman, and Torment of Hailfire.

I should say however that having never played this deck myself I can't say whether or not these are your best options to cut. But just from a glance they seem like things the deck would still do just as well without.

Cast Out is not legal anymore, replace with Ixalan's Binding, same forPull from Tomorrow and Never / Return Chemister's Insight for pull, Vraska's Contempt for never,... and of course there should be 4 Teferi, Hero of Dominaria, if your budget allows it.

A bit pricy but Reflecting Pool seems like it could be a little more consistent than Exotic Orchard. With a manabase tweak toward Unclaimed Territory or Vivid lands it can make rainbow mana pretty often. On the other hand Exotic Orchard is on-budget but essentially produces {1} before Shared Fate and is good for the opponent if they draw it.

Unmoored Ego specifies 'target opponent' so we can really cripple some decks and then after Shared Fate the opponent won't want to cast it on us because they're taking our cards.

Tn a similar vein to Flashback the new Aftermath cards are great since the opponent never gets to cast the bottom half. Farm / Market Never / Return and maybe Cut / Ribbons seem like the best ones for Shared Fate.

I've also been considering a light white splash for more sweepers (Supreme Verdict / Porphyry Nodes) and a lot of sideboard hate cards like (Rest in Peace or Stony Silence). Adding white significantly increases the price of the deck though, especially since fetchlands would become necessary.