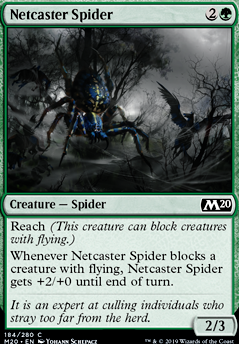 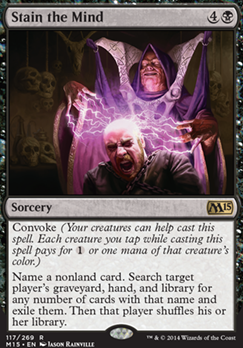 Netcaster Spider and Pulse of Murasa are no longer in standard :\ might I suggest more "Wayward Swordteeth", Mouth / Feed, Prowling Serpopard, or perhaps Synchronized Strike to act as makeshift vigilance?

sorry about this, but there are very few cards in your deck that would be worth anything in any actual modern meta. Why bother with Cast into Darkness, when you could have Doom Blade (for budget), Fatal Push or Abrupt Decay? Why so many Netcaster Spider - is that the creature you want to draw in every game?

Perhaps there is a deck, that could be built around landfall, and include Scute Mob and Vinelasher Kudzu. If you hope to make anything like that, you need ramp (to play more than none land each turn) and multiple copies of the cards you want to play with this concept.

You have quite a few creatures that cost 4 or more mana. 4 is a turning point in modern - cards that cost 4 should be able to turn the game around on the spot (like Supreme Verdict or Cryptic Command). How many of your 4+ cmc cards can you say that about?

Netcaster Spider has a fairly low cmc and is excellent at blocking fliers (although that's kind of Spider tribal's whole schtick).

Giant Spider is a classic card and probably deserves a spot somewhere.

Golgari Signet would top off as your fifth artifact and does a pretty good job of ramping you.

Grisly Salvage is a great, cheap way to achieve delirium for your commander.

In my opinion, the best way to approach building a deck is to pick the top 2 or 3 cards that you really like and that you think will work well together, then try to build a deck around making those cards function. Avacynian Missionaries  Flip is a fine card to start with. Naturally, you will need equipments for it to function. Thus, I would suggest 4x of Avacynian Missionaries  Flip and probably 4x of at least a couple of equipments (e.g., Bone Saw as you have, or maybe Slayer's Plate or Neglected Heirloom  Flip). Then look for creatures that you think you nicely compliment Avacynian Missionaries  Flip, like maybe Thraben Inspector (a low CMC card to get creatures out earlier) or Unruly Mob or Town Gossipmonger  Flip or Pious Evangel  Flip (all of these suggestions are inexpensive commons and uncommons).

Adding in some diversity of attack modes might also be nice, like Bygone Bishop that can fly, or Netcaster Spider that has reach. The idea is to diversify your offense and defense a bit. You'll want probably 18 to 24 creatures, normally settling in around 22 or so. With your equipment desire, maybe 20 creatures would be fine as well.

23 or 24 land is best to ensure that you don't get "mana screwed" by not having any land. It is possible, then, to get "mana flodded" but this happens less frequently in a well shuffled deck. With land and creatures, that gets you to 44 to 48 cards (probably 44 for you, I think). That leaves 12 to 16 cards left to get to 60 cards. 8 or so of those are already filled with equipment. So, 4 to 8 cards.

I strongly suggest "removal" cards. These would be instants or sorceries, leaning toward instants. Gideon's Reproach and Immolating Glare fit nicely into your deck, as does Clip Wings in your sideboard (maybe mainboard-- but you don't necessarily know in advance whether an opponent has flying creatures, so I say sideboard until after the first game). The goal is to make your opponent sacrifice creatures, hence "removal." I would mix in enchantments here, but you've already got a lot of equipments, so stick with removal for now.

My biggest criticism of your deck "as is" would be the lack of focus, but that seems to be a result of not having a lot of any one card. Multiples of the same card give you some "bread and butter" cards to rely on to make your plan work. When you have such a huge diversity, particularly of creatures that have relatively high CMC, then it gets problematic to get them out efficiently. I try to stick with about 4 to 6 different creatures total (22 to 24 cards), and removals/enchantments for the remainder. This seems to work pretty well for creature-oriented decks like those I like to build.

You do have some nice fliers in there in the angels, but they're expensive cards (CMC), so you won't get many opportunities to play them. You need some lower CMC creatures to keep you in the game until you do get a chance to get the mana needed to cast any of those. Out of 20 creatures, probably want 14 to 16 to be CMC of 2 or 3, maybe 2 or 3 CMC of 4, and then the small remainder to be your high CMC creature cards.

This should give you a starting point. Keep asking questions and I'll be happy to answer them. Sorry to be slow to respond!

Kizmetto,
I was a little concerned about your manabase too, so I goldfished 6 games through Turn 5. Here are some notes:

As HairyManBack points out, it's really hard to get the manabase right for a deck that wants ...

If there's a lot of Aggro in your meta, you might want to skew your Lands more towards Red-White and balance your

two-drops a little more. If your meta is more Control, I'm thinking you'll be fine.

One other awesome thing about Lightning Berserker: When cast for the Dash cost, it's immune to sorcery-speed removal. If that's as big an issue in your meta as in mine, you might lean even heavier on the Red sources.

Some thoughts on Creatures ...

One final thought: True-Faith Censer might be fun in the sideboard. After experiencing Always Watching , I imagine your opponent will side in every piece of EnchantmentHate he or she has. If you are simultaneously swapping in some Censers, you might be able to blank a few of their cards.

Good luck (and good skill!) with the build, and as always, draw well!