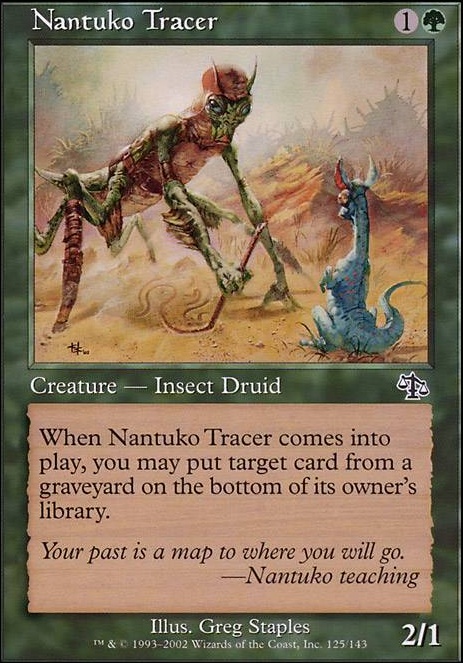 When Nantuko Tracer enters the battlefield, you may put target card from a graveyard on the bottom of its owner's library. 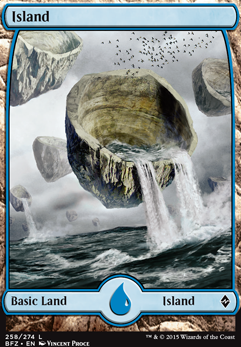 You're My Best Friend
by Jakoblowndes

Why Heart Warden and Nantuko Tracer instead of Elvish Visionary and Temur Sabertooth? Is it just for the mana and shuffle? I feel like there's better things you could do with the open slot, idk.

If I'm not mistaken, there is a way to use Glimpse without Gaea's Cradle that uses only core cards available even to the budget builds. Apologies if somebody already posted a solution. I'll outline my thoughts. Let me know if I'm missing something here.

Given that you are generating mana and drawing through your deck, let's assume you reach the point where your library is empty. Let's further assume that because you've seen your library that you have played out the subset of permanents necessary to combo (all with summoning sickness), and you have destroyed or bounced any taxing effects. You have at least Green Sun's Zenith in hand, floating, and once-per-turn resources that could be activated have already been used.

In this way you can generate arbitrarily large amounts of and . Now you execute the rest of the plan, making sure to play/reshuffle GSZ only after you play Winds of Rebuke and before you replay Nantuko Tracer .

You shouldn't be running into the Winds issue? Our primary and secondary recursion pieces (Nantuko Tracer / Riftsweeper + Scavenging Ooze ) are either in hand or on the battlefield, so they'll never be milled.

In addition, the Glimpse of Nature problem is unavoidable through conventional means. The infinite mana loop detailed in the primer WILL result in decking out, and you will have about 100ish mana to work with once you deck out. This means you can't truly go infinite and win the game.

I'd encourage giving the primer a good parse-through to see the planned lines.

Nice catch! You've actually hit on the biggest issue that the budget Cradle-less versions have. I've been meaning to do a write-up here on the primer for it.

In this version of the list, the version with Crop Rotation and Gaea's Cradle, we actually use a different infinite mana combo entirely to solve the Glimpse Problem.

In the budget lists, we haven't found the "perfect solution" for the Glimpse problem quite yet. The issue is that we want to preserve "slot integrity", which just means that we try to keep cards as useful as we can outside of the combos. For instance, this is why we use Winds of Rebuke instead of Laboratory Maniac, because Winds of Rebuke is more useful outside of the combo. The best budget solutions we have so far are things like Lightning Greaves or Exploration + Alchemist's Refuge, but since those cards aren't really that good on their own, they compromise slot integrity. For this reason, our budget lists just run Crystal Spray instead of Glimpse of Nature (for now).

If you want to hop on our Discord Server sometime, we'd love to have your help solving this problem!

That specific combo to net infinite blue is rare, but it works because you only use it when you already have assembled infinite green mana + infinite card draw. It's a tool to transform G into U, and then have access to all our wincon in Winds of Rebuke. As for how the combo literally works, you cast Chrome Mox, exiling a blue card. You then tap it for U, and destroy it with Nature's Claim. Next, you put the blue card you exiled back into your deck with Riftsweeper, and put the Chrome Mox and Nature's Claim back into your library with Nantuko Tracer. Finally, you loop your Elvish Visionary to draw all the pieces again, then repeat. This allows you to turn infinite G into infinite U, but we don't really need it, since we already run Birchlore Rangers (for other reasons).

This deck, especially its budget versions, are a pretty good starting point for competitive EDH. It's a little bit on the complicated side, but if you practice a little and stay aware during games, you should be fine. Feel free to pop by our Discord server if you want quick replies for any questions you have!

While the combo might seem fragile, it's actually very resilient thanks to the utility of "dork chaining". Since we're able to generate mana and tutor any pieces that we need, it allows us to run compact and efficient backup plans.

For example, our primary recursion package consists of Nantuko Tracer, Riftsweeper, and Scavenging Ooze. This means that if we run into almost all forms of interaction, we're able to tutor and cast a recursion spell for very little additional cost, and continue comboing off. If someone gets rid of Heritage Druid, we're able to use Birchlore Rangers, Nettle Sentinel, and Phantasmal Image to tutor chain to generate mana, tutor up recursion, and then use it. If someone exiles a combo piece, we can tutor up Riftsweeper, shuffle the combo piece into our library, and then tutor it up immediately after using a different piece. And finally, in the event that Nantuko Tracer gets stuck in the graveyard, we can tutor up Scavenging Ooze, exile it, then return it to our library with Riftsweeper.

The reason we don't use a simpler combo is that in its current state, the deck has at least 2 or 3 layers of redundancy for every core piece, thanks to the tutorable recursion. A simpler combo might work, but it would likely include additional dead cards that aren't really all that essential. One of the deck's prime appeals is its powerful resiliency, which operates effectively through interaction.

When you have drawn your library, you should have some large amount of mana from doing the (normally infinite) mana loop, which is not enough to win the game but enough to let you do just about anything else. The first, most important step of this loop is that every time you draw into Green Sun's Zenith, you should be casting it, so that you don't deck out. Be sure to have around 10 or more creatures on the battlefield, just to be sure you're netting enough mana with Gaea's Cradle.

To begin, shuffle Green Sun's Zenith into your library, then get Gaea's Cradle into your graveyard and return it to your library with Temur Sabertooth and Nantuko Tracer. If it's stuck in your hand, you can use Glamerdye to Retrace it into the graveyard, where it is then able to be put into the library with Tracer. Next, cast Crop Rotation, sacrificing a land you have on the battlefield. Search for Gaea's Cradle, put it on the battlefield, then tap it for some amount of mana. Next, use Temur Sabertooth and Nantuko Tracer to put Crop Rotation back into your library, and then draw it, usually by just bouncing a dork and replaying it, taking advantage of Glimpse of Nature's draw trigger.

At this point, you should have a land in your graveyard, a tapped Gaea's Cradle, and Crop Rotation in your hand. Next, use Temur Sabertooth and Nantuko Tracer to put the land that you sacrificed earlier back into your library, then sacrifice Gaea's Cradle to Crop Rotation in order to find it. You then put Gaea's Cradle back into your library with Tracer, and continue looping Crop Rotation and Nantuko Tracer in order to continually generate more and more mana. This allows you to generate infinite green without decking out, thanks to Green Sun's Zenith, and you can then convert it to infinite blue, and subsequently perform the winning loops as normal.

The Glimpse combo is convoluted, but thankfully, it doesn't add any extra dead pieces to the deck.