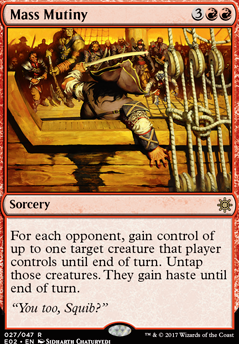 Mass Mutiny occurrence in decks from the last year

Brion Blessed Actually Gives A Toss What You Think
by nasigorengcina

Dr.Jones, thank you for the suggestion! I'm not sure if I see a good usage for cards like Obliterate , Jokulhaups , and the like in this deck. I'd only ever use them if I stole literally the whole field with something like Mass Mutiny , or Insurrection , and both of those cards are essentially win conditions already, especially if I have a sac-outlet on the field to ensure that I can keep my plunder. Sure, knocking out my opponents' lands, creatures, artifacts, etc. is fun, but it doesn't necessarily fit the theme of the deck. Please do let me know if I'm missing an important line of play in which the cards would be advantageous, but otherwise I'm not sure if they have a slot in the deck. Thank you for the suggestion!

I forgot Flame Rift and Book Burning . I use Blur of Blades a lot and find it very useful. if you like STRONG BURN then go with Guttersnipe and Embermaw Hellion and any spell like Magma Jet , if you want small burn then go with Shock . for faster plays Bloodlust Inciter . Collateral Damage or Artillerize or Thud just Heat Shimmer . ( Mass Mutiny for fun.) good spells such as Reckless Abandon and Reversal of Fortune are just fun to play.

First thing first I hate to be that guy but, your commander would be better off being Kiki-Jiki, Mirror Breaker or Feldon of the Third Path . Now I kinda hope you ignore that suggestion though.

My best suggestion is Sundial of the Infinite This turns anything temporary into something permanent. Exile at end of turn become "keep forever". Steal until end of turn becomes "Keep Forever". Anything that ruins your turn like cyclonic rift counter it with sundial.

Have fun going through and choosing stuff from the list and worst part of all cuts in your own deck.