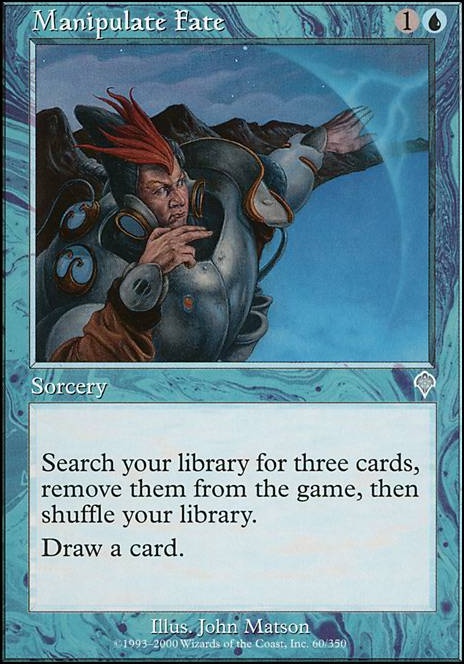 Search your library for three cards, remove them from the game, then shuffle your library.

Sidisi Self Mill CEDH
by Daniel_Ark_

Top of the Food Chain
by CommanderChemist

have you thought of Manipulate Fate?

Sapphire Medallion is honestly not needed, same with Blue Sun's Zenith and High Tide. Vedalken Engineer, Manakin, Hedron Archive, and Hedron Crawler are unneeded. I would throw in some artifact tutors that sac artifacts that you control like Master Transmuter, Arcum Dagsson, Fabricate and Tolaria West. Urza's Bauble, Foresight, and Manipulate Fate are very good with Emry for getting off a combo win.

GrinningGrebe these are all definitely cards to squeeze in. I really appreciate the heads up on Manipulate Fate I have never seen this card. Drift of Phantasms i think i can definitely find a creature spot for. I like Wargate but may be hard to find a spot. I want to keep Approach of the Second Sun which would probably be the slot it would go in.

Have you considered some tutors to improve consistency ? I know that not everyone likes to play them, but with a gameplan like yours could be certainly something to think about.

Manipulate Fate and Foresight can tutor for and put any three cards into exile.

Tainted Pact , Demonic Consultation , Plunge into Darkness can find Food Chain while also putting the important three creatures into exile to combo with it.

Food Chain is one of the strongest infinite mana combos; the big other contender is Isochron Scepter + Dramatic Reversal . It has a few notable upsides: it costs 3 mana total with some board presence (vs. 4), doesn't require non summoning-sick creatures or artifact critical mass, it doesn't use the activated abilities of artifacts or creatures and thus is not impacted by Cursed Totem or Null Rod, is a mana ability that is difficult to respond to in some contexts, is an enchantment which is difficult for black or red to interact with, etc. One of the biggest draws of the Food Chain builds is that single cards tutor both halves of the combo: e.g. Demonic Consultation exiles Eternal Scourge on the way to Food Chain . Food Chain also gets cantripping tutors for the exile creatures a la Manipulate Fate .

Isochron's main upsides are being able to use the mana for non-creatures, and getting outlet commanders with higher utility. Artifact tutors are much less powerful than the exile tutors, which means less tutor density overall.

They're both quite strong with both having slight tradeoffs that make them worthy of sitting around the same power bracket.

Survival of the Fittest, Apprentice Necromancer, and Force of Will are being run in place of Manipulate Fate, Extract, and Foresight for now. I will test with these because it seemed to not make the deck function any worse.