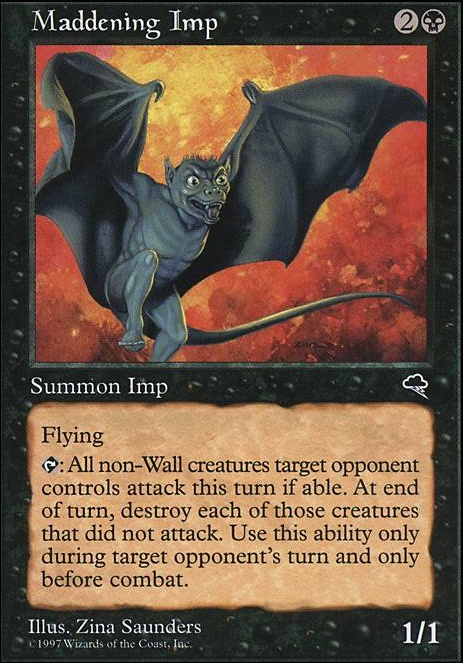 Tap: Each non-Wall creature the active player controls attacks this turn if able. At end of turn, destroy each of those creatures that didn't attack this turn. Play this ability only during an opponent's turn, before attackers are declared.

My Gorgons Harvest Your Organs
by Mervingian

Land of the Setting Sun
by 8netherwind8

Attack Me But Don't Hurt Me UwU

Maddening Imp can also be hilarious. It kills any creatures that are cast on their main phase and don't have haste.

Goblin Diplomats is similar. I think maddening imp is better but the art on the diplomat is good enough to run it.

It doesn't get multiple creatures, but Bloodthirsty Blade is realy fun and turn's the potential Blightsteel Colossus another direction until you can deal with it.

Maddening Imp as countermeasures against preventing creatures from attacking?

Wow, thanks for that detailed answer, triproberts12!

I already bought the deck meanwhile (just could not resist xD) but since I own a Phyrexian Tower from Ultimate Masters and run it in my Kokusho deck I replaced a swamp with it (just didn't think about it when I made the decklist and remembered it some days ago), I also replaced the Ashnod's Altar with Phyrexian Altar at the same time because they have the same mana cost and it gives me black mana.

I would love to add No Mercy (also to my Kokusho deck and simply ever black deck I own) but I am not at the moment out of money reasons. My Intention with Maddening Imp is to destroy creatures I don't want to see against me with summoning sicknes right away (unlike Nettling Imp Maddening Imp affects them as well). Maybe it will be a bit clunky and I'll replace him but I will have to see how it does in play.

Cover of Darkness seems pretty nice, I really will concider it! Although the Whispersilk Cloak was mainly to be able to hit with Master of Cruelties but maybe I will replace those again if I don't see it working. Shizo, Death's Storehouse looks very nice as well (my playgroup is running a lot of black though) but if it's not too expensive I might add on my next purchase. Especially because it is so much better than Rogue's Passage as you say.

I even got a Blood Crypt from Ravnice Allegiance but I'm not a greatfriend of the shocklands or signets, can't really say why xD

I don't know if Koskun Falls would be so great since I don't run that many creatures. The Haunt of Hightower I added mostly because I got it for free and it fits in a little. Maybe you're right about Words of Waste but I will have to see how it does when beeing played. I still have a couple of ideas on the maybeboard from my earlier versions of the deck. For example Sire Of Insanity would be great but I'm still a little bit too afraid really count it in.

Btw, I even bought the Syphon Mind in foil ;)

Thanks again for the great answer, I really appreciate it, because I rarely get answers on my decks!

Snap157 on Any ideas for Xantcha Politics?

if you do Xantcha, know that she DOES NOT work with Mogis, God of Slaughter, because the person controlling her can just sacrifice her. I would go for political strategy, using things like Varchild, Betrayer of Kjeldor, Disrupt Decorum, Kazuul, Tyrant of the Cliffs, No Mercy/Dread, Maddening Imp/Nettling Imp, Victory Chimes, Rite of the Raging Storm

Add in wipes like Blasphemous Act, Damnation, Fire Covenant, Last One Standing, and Decree of Pain

With Xantcha is you get infinite mana you can kill someone with her ability, so I would add in Basalt Monolith with Rings of Brighthearth, and she also comboes well with Neheb, the Eternal and Heartstone.