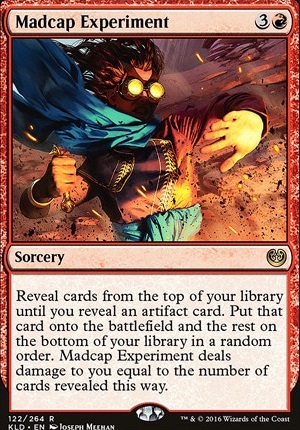 Reveal cards from the top of your library until you reveal an artifact card. Put that card onto the battlefield and the rest on the bottom of your library in a random order. Madcap Experiment deals damage to you equal to the number of cards revealed this way. 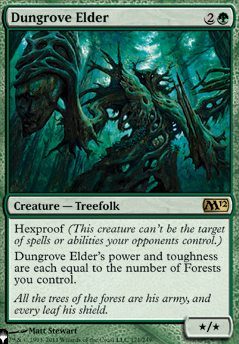 Madcap experiment pioneer (Under $50)
by GankSquad 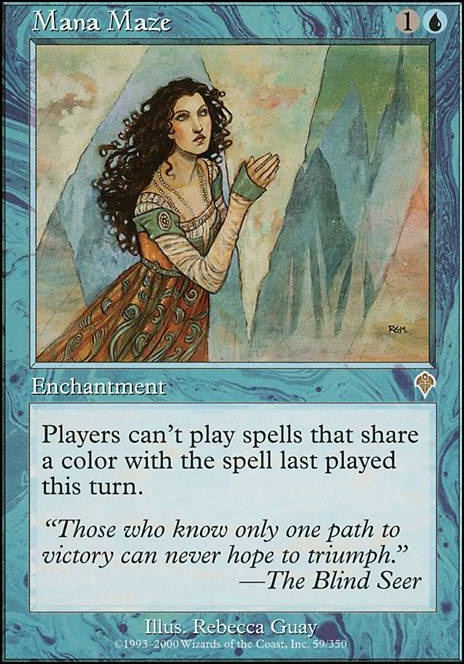 Yeah it was one of those decks that I saw and loved because of how much it can swing one way or another. Also I am super jealous of the invention Combustible Gearhulk as I have an invention Cataclysmic Gearhulk and want to add more of them to bling the deck out.

By the way my record with this deck is hitting myself for 19 damage with Madcap Experiment.

Honestly when I first looked at it I thought it was junk. I've been testing decks against a build I might turn into paper, and this really gave me a hard time. I was surprised how good Madcap Experiment and Combustible Gearhulk were. +1 from me.

Magnanimous on Pioneer No Mana Cost

Reanimation like Blood for Bones and Bond of Revival could work if you just wanted to beat down with huge threats.

I'm guessing the Expertise series, Electrodominance, and As Foretold aren't what you're looking for.

Burgess_Buttonworth and Epicurus, I definitely like Risk factor as a way to refill your hand after the reset or get in some damage. Maybe run something to protect the Lich's Mirror in case your opponent has instant speed removal in response to the Madcap Experiment, which would kill you. Also maybe run some bounce spells that hit all permanents, not just creatures. This can stop hate like Damping Sphere and other things that might hose your combo. I definitely like the idea of running Approach of the Second Sun (credit to seshiro_of_the_orochi for the idea).

Kiran_M this was a very rough draft of the deck when I first posted it lol. I was going to add a more painful mana base as it would increase the chances of Madcap Experiment killing you. I was also thinking about cutting a few lands because I found myself flooding a little too much. I like the idea of planeswalkers, I need to look into that as well. What do you think of jump-start cards to help after the reset? I most likely have to discard because the opponent has less cards after the reset.

Madcap Experiment is one of those cards which I have as something cute and occasionally broken. Most people will let the first one resolve and I will occasionally get lucky with 2 or 3 damage or brain myself for 18 damage. In burn heavy match ups I will side board it out in a heartbeat but it can just allow for some really early fun plays.

I have considered Whip of Erebos as it does come down much earlier than God-Pharaoh's Gift and gives lifelink which is a bonus. However, it does require me spending a fair chunk of my mana each turn to make it work. I will consider using it as a 3rd or even 4th copy of reanimation once i can get my hands on some to play test.

Thanks for the suggestion.