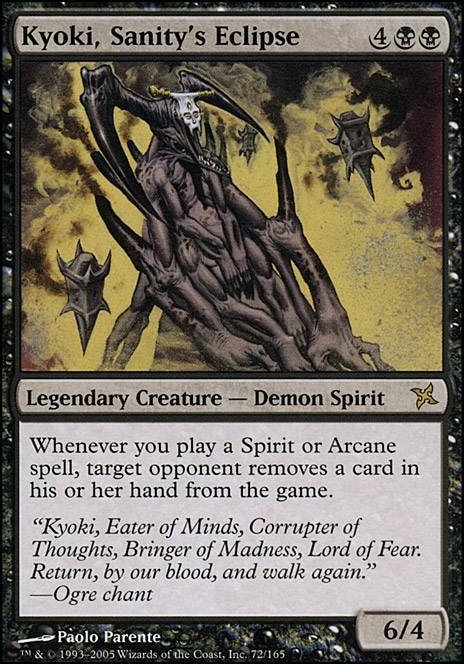 Whenever you play a Spirit or Arcane spell, target opponent removes a card in his or her hand from the game. 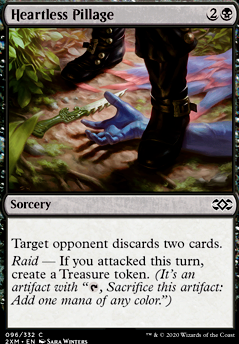 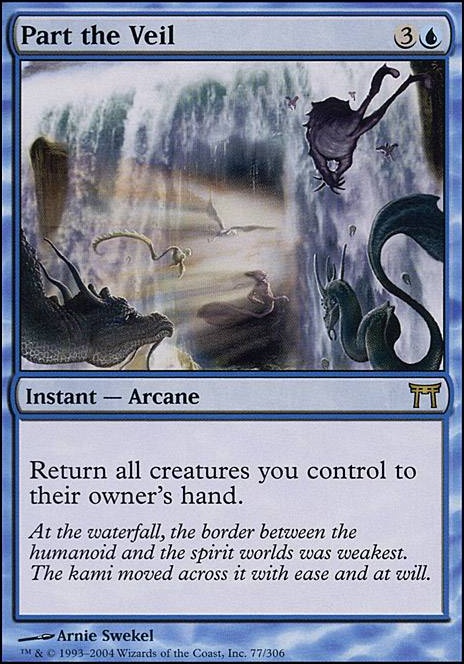 He Who Hungers $20
by Trcards 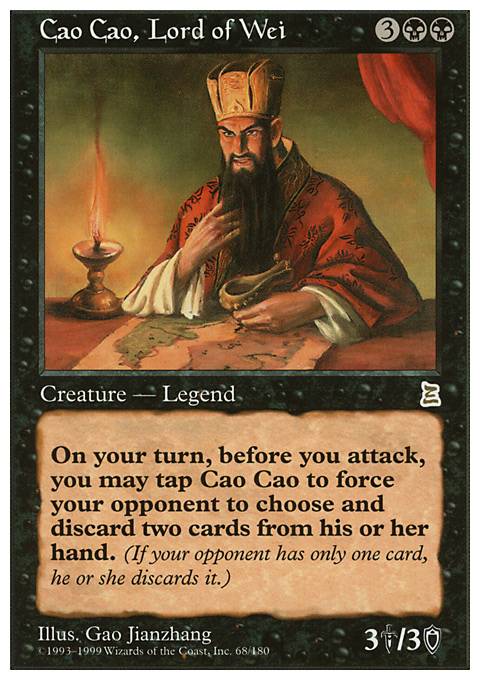 I'm not sure I like the Spirit/Arcane synergy here. Kyoki, Sanity's Eclipse cost 6, and I feel it may be too slow (I may be wrong). Without this synergy, you could use cards like Duress, Mind Rot, Mindstab or Ravenous Rats, instead of Sink into Takenuma and other arcane taht I feel are too.. unneficient. Also, you can use Doom Blade as removal, but I would probably look for -2/-2 or low cost removal, cause you mainly need them in very early game.

As noble Nezumi Shortfang could be an interresting option.

Oh, and if you want to be evil, you can play Rancid Earth and side board Contaminated Ground. I always feel that's so not fair to screw lands XD

This is a nice deck idea, however Kyoki, Sanity's Eclipse exiles cards so the opponent doesn't discard. Infernal Kirin would be better as a general for that.

Behind the Scenes and Unburial Rites aren't legal cards in this decklist; they have white mana symbols in their text boxes that technically means they are outside your commander's color identity.

Permeating Mass seems like an interesting 1-drop Spirit to include. Shuts down indestructible and other annoying creatures your opponents might choose to attack with.

Rend Flesh is on-theme and is far more effective removal than something like Tar Snare or Demon's Grasp.

Bounteous Kirin can really buffer your life total in conjunction with Iname as One's high mana cost and the slew of Spirits you're playing.

Petalmane Baku can fix your colors and ramp mana, which is important when you want to cast your 12-cmc commander.

Besides the fact that it is a staple mana fixer for EDH, Kodama's Reach is an Arcane spell, which has synergy with some of your effects, plus it's a flavor win.

He Who Hungers is a powerful counter to control decks, and provides an outlet for your weaker Spirits.

Soulless Revival is a superior Raise Dead because of the Splice onto Arcane ability.

Death Denied provides even more recursion; plus it's an Arcane spell.

Haru-Onna is a pretty generous card advantage engine for Spirits.

Myojin of Night's Reach is another hard-hitting card disadvantaging Spirit.

Hana Kami is cheap and can be used to recur an Arcane spell for more Splicing shenanigans.

Wear Away is the Naturalize variant this deck can make the most use out of.

Great decklist! Very flavorful, and I love how these Kamigawa cards are being utilized!