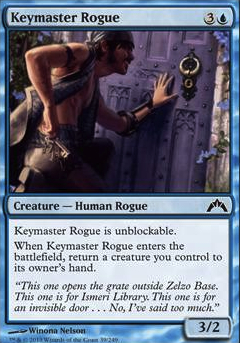 @alucardvanguard: Hey, thanks for taking time to look at the deck!

I agree on some of your recommendations about getting in some better creatures. I cut Deathcult Rogue & Keymaster Rogue for Ornithopter & Spellstutter Sprite respectively. Hell, the sprite reminded me of another card to add that I put in the maybeboard until I can find a spot: Familiar's Ruse. Also, I do like Dimir Infiltrator as well but I am not sure what to cut just yet.

Regarding the delve cards Dig Through Time, Temporal Trespass, & Treasure Cruise. I have a soft spot for these cards and would love to use them. My issue with them is they are costly if I have no graveyard yet, resulting in a dead card in my hand early game. Also, the game plan is to mainly secure the Maralen of the Mornsong + Mindlock Orb lock before winning with damage (if they don't forfeit). With that in mind, high damage cards like that would paint a bigger target on my head.

Blastoderm has Shroud. Meaning it can't be the target of Man-o'-War's ability. Wormfang Drake doesn't target any card but forces you to exil a card just like other effects forces players to sacrifice creatures which is why it's the only card that allows you to reset your Blastoderm. But you have a problem if Wormfang Drake is killed while its first ability is on the stack. That way you won't get the creature it exiles back. Altough you still have the option to say I rather sacrifice it and nothing happens because it already left the battlefield -> Meaning if it get killed while its ability on the stack you shouldn't use it on your Blastoderm.

Cards that forces a cost upon you and doesn't use the word target can be used to flicker Blastoderm like:Keymaster Rogue, Storm Sculptor , Veil of Secrecy (if you have other arcane spells)Also some others but I wouldn't suggest them: Havengul Skaab, Horned Kavu (not in your color identity).I hope this helps. Maybe you want blue or green Arcane spells to use Veil of Secrecy more often while making a non-Blastoderm unblockable.

Night of the ninja

How about Cavern Harpy and Doomsday Specter for some sweet synergy. Upon entry they let you bounce a ninja, and they have evasion, so you can more easily ninjitsu using them. Keymaster Rogue is good for the same reasons.

rockergage I do have a R/W commander but it is being used in a soon to be R/W token deck. but if I can find a R/G/W legendary I will change it around. and my friend playtested this it works out great. the CoP's are in there to protect yourself with so your creatures can attack. and having that splash blue helps out more than you want to give credit for. like the Invisible Stalker and the Keymaster Rogue. and my friend uses the Clone to copy either his Hamletback Goliath or his Stun Sniper. this deck was meant to be a human deck so Cavalry Pegasus could be of use. now I do not know but I think the Legions are human but if not they still help out in allot of ways. so having the splash blue supports this deck allot.