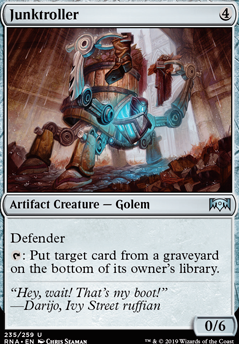 : Put target card in a graveyard on the bottom of its owner's library.

Phenax, God of Mill (what else)
by Daschna

This is Going to Hurt
by Sir_Millzalot

Okay I ordered couple more cards got the Cranial Extraction and I was missing the Bitter Ordeal and Cyclonic Rift two major key players in the dilemma. Another player being Junktroller and Lim-Dul's Vault He will allow me to keep casting these cards.

I'll have a rematch with the player and play him a few more times and report back.

I think I would switch Junktroller and Chromatic Lantern for more surveil like Deadly Visit Doom Whisperer . Also I think your whole food-creature focus is not very good if you really want your commander to deal the damage. Reanimate spells like Cauldron's Gift would maybe help more and can bring your commander back when he inevitably gets focused