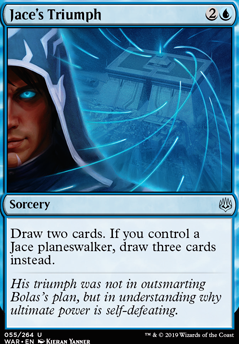 Draw two cards. If you control a Jace planeswalker, draw three cards instead. 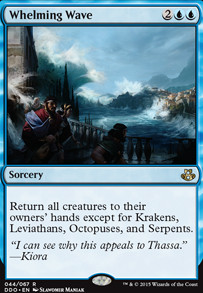 god of draw
by cartho 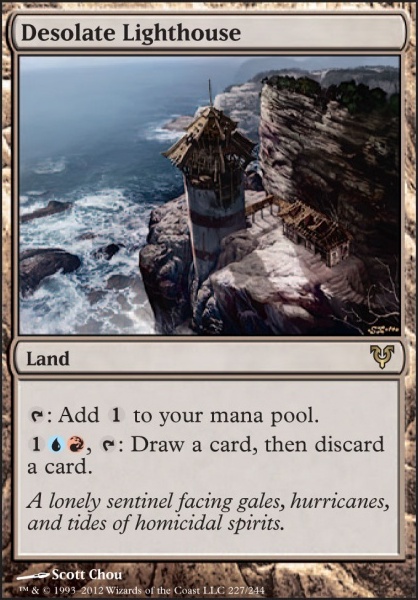 What about Aid the Fallen ? I think a Doom Whisperer would be cool, if you could find a way to get it from the yard to the field.

Also, Chemister's Insight , you can cast that from the yard too.

Hey, you're welcome. I decided that playing Commander is a better use of my time and money which in return makes its more fun especially for brewing. Mostly because Standard manabases are ridiculous prices due to the only good dual lands to play are rares and I need 4x of them which is expensive. Doesn't bode well for brewing decks in paper without using proxies which I hate using :(

You've made some good changes, but I think cutting Opt and Jace's Triumph is a mistake. 4x Opt, 4x Contentious Plan , 4x Triumph, 4x Jace gives you a nice curve of draw. Opt is very good with Channeler's proliferate, one mana draw at instant speed.

Spark Double and Jace's Projection are cards that as 4 ofs are hurting your mana curve because Jace is the four drop who you want to play more than anything else. Drawing a lot of Doubles can be a hindrance since the card doesn't do anything unless you have another creature or Planeswalker on the battlefield since you can't copy an opponents card. The effect of copying a Planeswalker is powerful, but it's very situational which is not good when playing it as a 4 of. Double does put a +1/+1 counter on a creature you copy which is good with proliferate.

Jace's Projection loses some effectiveness now that you have added Flux Channeler and Plan. You no longer really need Projection's ability to put a loyalty counter on Jace. Protection is still good with proliferate since it can put a counter on itself and drawing is the core strategy of your deck, but 4 of is a lot. With all the draw you could toolbox several cards such as Double, Projection, Negate, Chart, Blink of an Eye , etc. which would help to draw the core of your deck more easily while also giving you options of spells.

3-4x Wizard's Retort is good, but Negate as a 4 of is dead in too many situations. It's better to split Negate up between main deck and sideboard with more in the sideboard then main deck. This way for matchups where Negate is good such as against Control then you can board in games 2/3 more Negate, but in matchups where it's dead such as against aggro with creatures you have less of it to worry about dead drawing.

My first thought is "damn, Fblthp, the Lost would be PERFECT for this deck" so I recommend x4 lol. There's a lot of good stuff for this coming in War of the Spark like Jace's Triumph might be pretty good with that x4 Jace you have, Bond of Insight , Callous Dismissal (good for stalling which is def what you want), Kasmina's Transmutation can be decent removal for mono blue, Dovin, Hand of Control seems really good for stalling longer and Saheeli, Sublime Artificer would help with stalling as well with chump blocks all day. Good luck!

Jace's Triumph is a strictly-better Divination, but both are pretty bad.

Contentious Plan and Steady Progress seem both like cards you should add here. Same with Merfolk Skydiver and Evolution Sage .