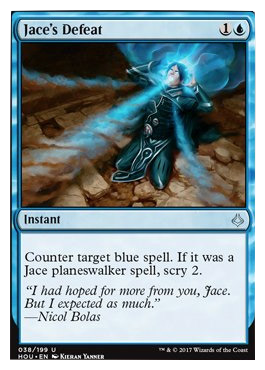 Counter target blue spell. If it was a Jace planeswalker spell, scry 2. 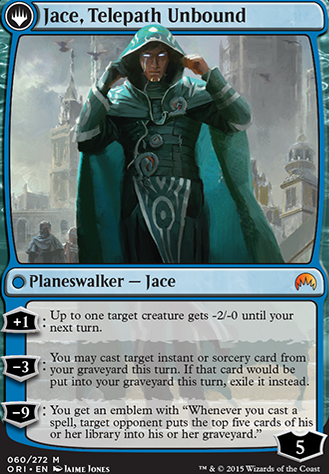 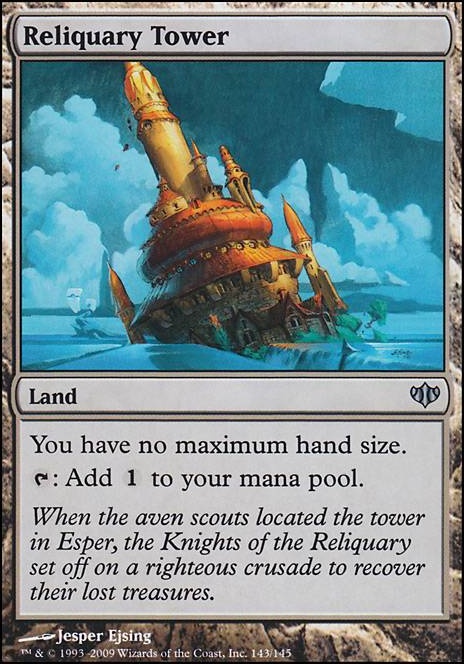 I believe this deck could use a couple sideboard Alpine Moon for the Lotus Breach lists. You have strong interaction, but they have access to Veil of Summer for it, and that card is busted. Blink of an Eye is amazing against Jace, Wielder of Mysteries in the Inverter decks, killing them, and also being good against the inverter itself, Teferi, and maybe going down a couple Jace's Defeats, amazing card, but seems just a tad specific :P

I get the feeling that this deck has to be on defence in creature matches and build up it's forces untill you have force strong enough to just overwhelm opponent or slowly kill with flyers. That's why i prefer going with less lords and with more small, cheap and defensive creatures rather than Benalish Marshals. That allows me to play 2 Dusks without fear of losing too much creatures to its effect and just swinging for the lethal afterwards.

The deck is slow because it never gets to do anything on turn 1 (other than cycling Cast Out or playing some weak 1 drop if any) and turn 2 plays aren't really scary. I like having more removal tools for this deck because of that as it improves some game 1 matchups vs agressive decks and vs Storm - removing Inspiring Statuary early on may prove game breaking.

I've created list that I'm currently playing. I'll be playing it on tommorow Standard Showdown with 1 change though - -4 Knight of Grace for 2/2 split of Suncleanser and Seal Away. Knights were never strong in this deck in my opinion and some defensive tools may prove to be a better choice.

Also my sideboard is a bit different. 50% of meta in my region is playing a lot of aggro decks and heavy U decks with 0 GPG's so I'm not playing Remorseful Cleric. Instead I go with 2 Authority of the Consuls and 2 Jace's Defeat (-1 Negate for that). Still the SB in my deck is IMO the most all-around.

I would personally lean towards Nezahal, Primal Tide cuz you do get some value from it, usually I'll get 2 or 3 cards out of him. But with Kefnet the Mindful usual gets removed pretty easily by either countered by Jace's Defeat or Vraska's Contempt. Your right though I should keep 1 in the sideboard.

1) Once an ability is activated, removing the source of the ability doesn't counter it, but you could still cast Seal Away in response to the activation just to get it off of the field. Also, a mana ability like that of Llanowar Elves can't be responded to, but you could cast Seal Away later in the turn to exile it so it can't be used on subsequent turns.

2) A mana ability is an ability that can add mana to a player's mana pool. In order to be a mana ability it cannot target (not stanadard relevant), and cannot be a planeswalker ability (like Chandra, Torch of Defiance

's second ability). It only needs to be able to add mana to a mana pool, not necessarily do so, as such Sanctum of the Sun's ability is a mana ability even if you have 0 or less life.

3) Yes, as long as a spell is blue it can be countered by Jace's Defeat even if it has additional colors.

4) Yes, but as addressed earlier the ability will still resolve, and many abilities do not effect their sources so bouncing it will have little effect most of the time, especially with planeswalker ultimates.

5) This is exactly the sort of situation addressed in 1 and 4, Boros Reckoner would die from the 13 damage well before it's ability resolved, but your opponent would still be dealt the damage.

Hey everyone, I am just now getting back into standard after not having played for 5 years. With that being said, I have some questions about card interaction that I was hoping you all could answer (seeing as I know a lot of people here are actively playing at FNMs and probably some of you are even rule judges). Thank you!

This deck has a big problem.

It has 19 Creature spells and 18 Non-Creature spells, often meaning that it has nothing in its opening hand that can be played by Turn 2.

This means that your Opponent can easily pull ahead of you.

You need to adjust the proportion, so that you have more Creatures.

These spells can be removed:

2x Built to Smash - This is great with Electrostatic Pummeler, so not good with other Creatures.

4x Cartouche of Knowledge - I know this gives draw, but it also allows your Opponent to 2-for-1 you; they only have to play one removal spell, and they have gotten rid of two of your cards. Giving your Opponent that kind of card advantage is never a good idea.

I would consider replacing those cards with more early Creatures.

I don't like how Lathnu Hellion works in this type of deck. It's extremely situational, and as your Opponent I will happily chump block, and force you to potentially waste , that could be used for something better. Seeing that we have added Whirler Virtuoso in the three drop slot, we don't really need it any more. I would take all copies out, add a fourth Whirler Virtuoso, and then look at what is going on further up your curve.

Not much. Bristling Hydra is an excellent card, but it needs some friends. Three copies of Glorybringer would round things out very nicely.

Your Sideboard is fairly much on point. LOVE Jace's Defeat. I've been using that myself against Control decks.

If you have a local meta where things like Earthshaker Khenra, and Scrapheap Scrounger are being played, you may want to add some Magma Spray to your Sideboard.

I hope that helped a bit.

If you make some changes, and want me to take another look at your deck, just tag me in these Comments.

You're gonna need a LOT more Counter spells if you want this to work.

Would suggest four of the ones you have, plus four Disallow, four Cancel, and four Jace's Defeat.

I've been thinking of a sideboard for this deck and I've come up with some ideas:

Silent Gravestone or Sentinel Totem against The Scarab God, BR/MonoB Aggro, and other graveyard strategies.

Full playset of Unsummon against flyer-heavy decks and big flyers such as Angel of Invention or The Locust God.

2 more Hope of Ghirapur against control strategies, my brother used one against my Approach with his Mardu Vehicles and prevented me from casting it to win.

Maybe a couple copies of Ceremonious Rejection against decks using a lot of artifacts.

Supreme Will might work against control-heavy strategies and midrange decks

If you could create a good sideboard for this deck, try using these cards and it might turn out to be game-changing!