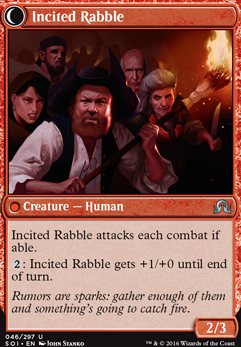 I can see why you love my deck haha, our decks share a lot of cards.

Fun fact: I initially wanted to start my mono-white aggro deck with a playset of Aerial Responder, Stitcher's Graft, and Trusty Companion, but somehow ended up removing all of them.

I tried to keep my list human-only to get the most out of Thalia's Lieutenant, and tried to not go below seven equipments, otherwise Strength of Arms is often just a weaker Giant Growth. Although if it means boosting a Lone Rider to flip (ideally while killing a blocker), that's usually still well worth it.

(For a similar reason, I didn't play Captain's Claws since I realized when using Stitcher's Graft that three mana can be quite a lot at times. Although the fact that the Claws still synergize with Hanweir Militia Captain  Flip might be worth an inclusion. Then again, he's kind of a win-more card to begin with.)

Due to Captain's Claws and being mono, Westvale Abbey  Flip should be a decent alternate win-con (and token-maker).

(Since I wanted to keep Neglected Heirloom  Flip in my decklist and had a problem of "running out of fuel" quickly, I decided to splash green for Duskwatch Recruiter  Flip, so I could both draw cards and have more redundancy to flip the Heirloom. I can definitely recommend him if you feel like you sometimes end up topdecking lands and not knowing what to do with your mana. Although I guess with Thraben Inspector, Incited Rabble and Westvale Abbey  Flip as mana sinks, that shouldn't happen too often.)

PS: You told myself twice in your comment that you upvoted, but it looks like you actually didn't I don't care too much about it, but you should probably make sure that you actually do upvote the next time you post a comment on someone else's deck :P

Yes because when Town Gossipmonger  Flip attacked, it had vigilance so it doesn't tap. So declare attackers, they declare blockers, before damage you tap TG and another attacking creature (preferably) and flip into Incited Rabble. I actually love doing it because it feels so jank lol

do you mean that Incited Rabble will deal damage even though it's tapped?

Yes, the Incited Rabble is tapped after flipping and thus can't attack (it only attacks each combat "if able"). Note, however, that if the rabble somehow becomes untaped, it will still have to attack as long as it doesn't somehow have summoning sickness. Also note that if your opponent controls a card like Archangel of Tithes or Ghostly Prison, the rabble won't have to attack each combat if you choose not to pay the associated cost.

Ok so you have to tap Town Gossipmonger  Flip to flip, so say i put him out turn 1, then turn 2 i play Thraben Inspector and tap both to flip the gossipmonger into Incited Rabble. Is the Rabble still tapped after flipping or can i attack with it turn 2?

DJSeras on Can I transform Town Gossipmonger ...

Antoniobizarro on Can I transform Town Gossipmonger ...

Considering I have Always Watching on the battlefield and I declare an attack using Town Gossipmonger  Flip and it's not blocked. Can I use its transform ability and turn it into Incited Rabble to pump it with the +1/+0 ability?

So I was looking at SOI cards and realized that none of the transformed creatures, whether Incited Rabble  Flip, Timber Shredder  Flip, Skin Shredder  Flip or Ormendahl, Profane Prince  Flip, have a converted mana cost (CMC) in their transformed state. Does this mean that their CMC is 0 And therefore can be targeted by Silkwrap?