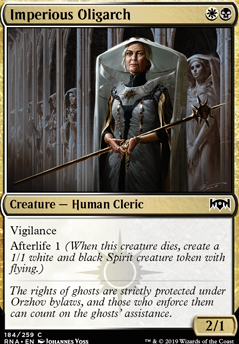 Imperious Oligarch occurrence in decks from the last year

I don't know who you play against, how it goes, or how the deck really performs so I can't really say. My initial thoughts point at Beckon Apparition , Midnight Haunting , Raise the Alarm , Spectral Procession .

I also noticed Costly Plunder as something I'd replace but specifically for its place I'd put in a Necropotence . For the creatures I suggested Imperious Oligarch , Seraph of the Scales , Doomed Traveler and whatnot are things I immediately notice. Karlov isn't guaranteed to be out. Afterlife is nice and all but it only goes so far when you could get something else like control out of those three I mentioned. I don't know how well afterlife pays off for you though, I haven't messed with it in my EDH yet. More tokens are always nice but I feel like there are better options than most afterlife creatures. I was hoping for better afterlife from Ravnica Allegiance.

hey, Endrobot! you asked me to come up with some cuts for the deck in return for upvotes, so here I am! hmm tough decisions here.. theyre all very synergistic, but I'll do what i can to the best of my ability. Reassembling Skeleton works well because you can sac,bring back and repeat as long as you have the mana but he doesn't have a death trigger. Hunted Witness , Doomed Dissenter , Doomed Traveler , Imperious Oligarch & Orzhov Enforcer are great low cmc creatures that synergize really well with teysa, but maybe theyre just not inpactful enough for EDH? i dont know you dont want to cut too many low cards. Plus, they all make tokens when they die and with teysa out, they make double tokens, with lifelink and vigilance so maybe just a few of those? maybe Batwing Brume ? its a cool effect and i see the synergy but i would put in a Path to Exile instead? Smothering Abomination works well too, and card-draw is essential. but his ability doesn't double trigger with teysa. plus, it seems like you have plenty of draw. Pitiless Plunderer is good..good ramp..but if youre gonna run him id throw in a Revel in Riches as an alternate win-con. but what Kiba said: it is better at flash speed. a Vedalken Orrery would be great if it wasnt $30. i only own one now im considering putting it in my teysa build instead of my new chainer deck. hmm more cuts more cuts... if youre gonna keep your deck low to the ground and not take out all of those two drops like i said (which cutting low cmc cards may be a bad idea, i'll admit) then you could afford to cut a couple lands? you have ramp with Solemn, the hart, all the rocks and the plunderer. it shouldnt be too bad cutting at least one or two lands. especially with the new mull rule. Sorry. I'm all over the place with my suggestions. I certainly hope I was atleast some help. Please let me know what you end up doing! im curious now. and i like what you got here, btw. +1 from me!

you could try a few cards if you want to go with the life gain path, Sorin, Vengeful Bloodlord is great for giving the rest of your creatures lifelink and some reanimation from him on say elenda could be good. next, your deck has a decent amount of creatures dying and you have poison tip archer, so then you could try Cruel Celebrant to gain off of that. another good card is Bond of Flourishing , you get to look for a card and gain some life. you could consider Ajani's Pridemate as well, gets real big real fast. lastly, if you added some more sacrifice fodder like Imperious Oligarch then you might be able to add something like Priest of Forgotten Gods but that might not fit into the deck.

Also, I am a fan of a lot of the Ravnica Allegiance afterlife cards like Tithe Taker , Imperious Oligarch , etc. Hunted Witness too.

I like the new formation you've done with it. Looks really good, Plaguecrafter is a good card, especially when you mix afterlife and the opponet having to sacrifice something as well. Three Midnight Reaper probably works alot better and I think your right, its a lot of 3 drops, plus you do have other card draw sources as well so it would synergize well, agreed.

Yeah, keep the Divine Visitation idea for sure, its a really good card for tokens, by using afterlife with it, you can accumulate plenty of angels.

Imperious Oligarch is not a bad choice, more two drops can help out alot actually when you go to play Visitation later in-game. I like Ministrant of Obligation due to its afterlife 2 effect but it is a 2/1 creature like Oligarch plus an extra mana. I understand where your going with it.

Keep up the cool deck ideas, I hope it works out for you like you mentioned. Not to many other ideas I could recommend, your on the right track for sure. Especially in finding a way with the Visitation card.

Also yeah I agree about that as well, lots and lots of different Afterlife renditions. Finding whats fun for you is what would matter. Never think theirs an "exact" way to make a deck. Whatever works for you and enjoyable to play works better than playing a deck you wouldn't enjoy. Some additions definitely help.

Typed alot like I mentioned at the start lol. Let me know how it performs for you when given the chance, and if you have any more ideas or ways to implement the deck idea. Hope it works out :).

SoulsSlayerKnight Hey! check it out now! i actually kept a lot of it because the synergy is very good (until Ixalan and such rotates out.) but this is what i got Plaguecrafter and i switched out Ministrant of Obligation for Imperious Oligarch . I feel like its better with plaguecrafter to help with forcing your own tokens and sac an opponents creature! i also think the lower mana cost monster is more worth it for easier play. after i put 3 Midnight Reaper s in the deck it seemed like to many 3 mana drops and i think it works better. still not where id like it but i keep seeing different renditions of the "afterlife" deck and it keeps changing for me but i for sure want to keep the idea using Divine Visitation . Sorry that was a lot to type. lol

So I had a similar deck, and I think Judith is definitely a 4-of. I'd go down Vindictive Vampire , Imperious Oligarch , and Tattered Mummy for 4 of both Hero of Precinct One and Fireblade Artist , and 3 of Legion Warboss or Hunted Witness . Not so sure about Pitiless Pontiff , Priest of the Forgotten Gods seems better. Finally, I'd go down 2 Teysa Karlov 's for another Footlight Fiend and one more Mortify . Vraska's Contempt is strong against control, might run it as a 2-of.