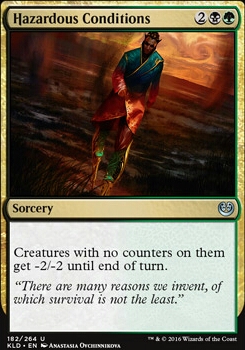 Creatures with no counters on them get -2/-2 until end of turn.

In Soviet Russia, Grave Buries You
by DammitCat

My thought on Buried Alive was to only use it to grab Brawn, Filth and Death's Shadow. Not so much to reanimate, but just to get them to the yard. Death's Shadow would die as it ETB, then I could use Varolz to scavenge it for 13 counters on Skullbriar. Not bad for 2 black mana. Again, though, not sure how consistently useful it would be.

I may try Grim Affliction for a bit. There are going to be some cards I can't order just yet, so if nothing else, it'll be a decent placeholder.

I have a spare Decree of Pain that I could throw in to try. Not sure how I feel about 9 drop board wipes, but if I can find a spare of either I'll give one a try. Languish and Hazardous Conditions wouldn't do much in my play group, unfortunately. Lots of big creatures, voltrons and +1 styles.

I like the idea of Brawn and Filth. I'm not sure that Buried Alive is worth it unless you have more of a dedicated reanimator theme. I'd rather run a tutor that can get anything, and go get Filth if it would be good (and rely on board wipes or chump blocking to kill it, I guess). I don't understand what interaction Death's Shadow would have, though - did you mean a different card?

I don't think one-shot Proliferate is good enough to make it worth running Spread the Sickness. You are never going to want to spend five mana to cast it. Grim Affliction might be worth trying out because it's an instant. It probably isn't as good as whatever you'd cut, but instants that do things are important.

I think Exoskeleton depends entirely on your playgroup. If you end up playing a lot of long grindy games or end up running out of time a lot, then I'd put it in. Kill some people, make things happen!

I'm reeeeeeaaallly leery of BSZ as a sweeper in a Skullbriar deck. There's going to be times when you are holding your sweeper and cannot cast it because it will lock you out of your commander for the rest of the game. And yes, the interaction with Melira is sweet, but if your opponents have a way to kill her in response, you are going to be in deep trouble. Deluge would be lovely. I always enjoy Deed. Decree of Pain and Plague Wind/In Garruk's Wake are fine choices, albeit expensive. Damnation is fine. Languish could be better if you find that you typically have a giant Skullbriar facing down a bunch of small-to-midsize creatures. If your meta has lots of tokens, maybe Hazardous Conditions is worth a spin.

Thinking of dropping the 3xGlassblower's Puzzleknot's for some 3xInvigorated Rampage's. @Legendary_penguin_of_death's comment makes sense. Last time I played with this deck I kept getting chump blocked, which Is why I thought of adding in Hazardous Conditions, but I also like the thought of just going straight through their critter's too! I'm going to playtest this tomorrow again I think! I'll let you know what happens!

Updated the deck, I'll get to play test it this Wednesday, but I want to see if Heroic Intervention, Hazardous Conditions, or Durable Handicraft could help out my deck and add some protection, or some kill everyone else aspects.

Hazardous Conditions seems like the opposite of what you want to do. All your opponent's creatures will have counters; the card does nothing here.

Hi, what do you think of adding Vraska, Relic Seeker as a 1 of in the deck? I think it's a pretty powerful card to finish a game off with, and you don't even have to splash for it in this deck. Also I think Glint-Sleeve Siphoner would be a great 4 of card for this deck, because it gives you plenty of card advantage, and fits the energy subtheme you seem to have here. Also I'm iffy on this but Hazardous Conditions might be spicy tech.

at this point I just like 24 lands in any 60 card deck I have, buuuuut I do have plenty of faith that the 22 you have is fine. now the only change I would make to lands is adding 4 Ifnir Deadlands and maybe 2 Grasping Dunes. the Ifnir Deadlands I must say from experience are way more powerful then they look and to top it off fit your decks theme, so 100% includes. now Grasping Dunes is weaker but it is in them, so they are maybes. now what i would replace is 4 Swampfor ifnirs and 2 Foul Orchard for Grasping Dunes. but once again dunes are definitely a maybe, it won't hurt you at all to not have them

now I know Liliana, Death Wielder is in theme, but for 7 mana she does not do nearly enough so I could never suggest her in any deck outside of commander. Now Vraska, Relic Seeker may not be in theme but she alone is a fire magnet that ends the game by herself while being good removal in your colors. so if you want a planeswalker in this deck shes the only one I can suggest.

no real suggestions, there really is only one for your slot. maybe add a fourth since its the decks theme.

you already have push but a few things you could add are Blossoming Defense it may not be in theme but it can act like a kill spell and save your hapatras. Hapatra's Mark is an in theme blossoming defense. buuut sometimes you may want that +2/+2. Splendid Agony its not super but it triggers your stuff and can kill creatures, so really good in your deck needs play testing to be sure. Torment of Venom its pricey but i like how many counters you get out of it, plus the punish effect can be fun. Vraska's Contempt is solid sideboard tech for a deck with gods or planeswalkers.

Grind is cheap, kills possibly two creatures and channeler initiate can cast the dust part. but probably better in the sideboard. its not super strong but Hazardous Conditions is a fun field bomb your creatures could technically survive if they have -1/-1 counters on them, but against constrictor decks it does nothing sooo sideboard against token decks or just don;t use it. Its just a funny card that would surprise your opponents when your creatures survive it. Lethal Sting is your decks unlicensed disintegration, that can trigger your other cards. lastly maybe a field bomb like Yahenni's Expertise.

Archfiend of Ifnir though you don't have much cycle or discard he can wipe a board and do massive triggers, just need some discard/cycle cards. Bone Picker not to theme but your deck should have things die often. so a 3/2 flyer for 1 is awesome. Crocodile of the Crossing this is one of the best cards you can add, its in them and as game ending as hazoret with 5 power haste. i just love the idea of playing it putting the counters on a festering mummy, making tokens then put festering mummies counter on an enemy card to make more tokens then hit for 5. its soooo good. Decimator Beetle i do agree with you its cost makes it slow, but a one of might be good. Plague Belcher no your not zombies but the counters and 3 cost 5/4 menace means he is in theme with ridiculous power. Ruthless Sniper like archiend if you go cycle in any way he fits the theme.

so those are all my suggestions the actual changes i would go through with is- trade 4 Swamp for 4 Ifnir Deadlands, trade lili for vraska, take outWalk the Plank replace it with 2 Lethal Sting (worse but in theme) or keep 2 walk the planks and add 2 Yahenni's Expertise. take out Baleful Ammit and replace it with 2 Plague Belcher, go down a Banewhip Punisher to 2 and add a Channeler Initiate to 3. take out the Defiant Greatmaw and add 4 Crocodile of the Crossing. trade 2 hapatras for 2 Exemplar of Strength. so you have 4 exemplars and 2 hapatras. I cant promise this will be super strong with what little support wizards gave us but this is what i suggest.