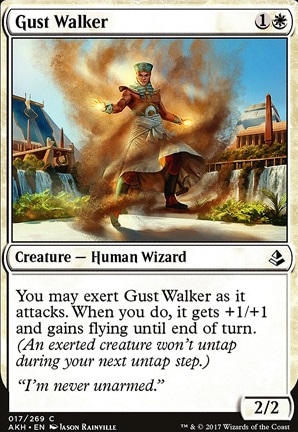 You may exert Gust Walker as it attacks. When you do, it gets +1/+1 and gains flying until end of turn. (An exerted creature won't untap during your next untap step.)

The deck looks cool but I would take out the landfall cards. I know they work well with evolving wilds but you only have 18 lands so they will be irrelevant cards really quickly. Instead of those cards maybe try something like a Gust Walker Flayer Husk Porcelain Legionnaire

This is pretty sweet. You would definitely improve your low-level removal package by swapping the Trial of Zeal and Impeccable Timing for a playset of Lightning Strike, as the instant speed & cheaper cost of Strike trump the potential to return your Trial to hand. Cartouche of Zeal is also borderline; try replacing it with extra copies of Gust Walker and Ahn-Crop Crasher and give it a trial run.

Glory-Bound Initiate and Glorybringer are by far the most impactfull exerters. Both should be easy 4x includes in a deck like this one

Champion of Rhonas seems kinda bad. Your curve is simply not fit for it. Think about it: at best you attack exert and get basically 3-4 mana to cast only a creature. That is if your opponent does not have removal, and with a decent blocker he will be able to kill the champion and leave you with whatever you get. Look at it like a 4 mana spell that puts a creature from your hand into play, then creates a 3/3. But its all delayed quite a bit. If your curve is this low, you might as well play Sram's Expertise then. Still 3/3 stats, but you get the card instantly, and on top of that you dont get blown out by a removal spell.

Im not sure I understand the format to fit this in. With cards like Harmonize, why not replace Blazing Volley with Lightning Bolt? Rain of Blades seems even worse.

Consider strong cards like Always Watching , Ahn-Crop Crasher, Prepare and Gust Walker. Also, if it fits in your budget Aurelia, the Warleader is the coolest card possible for an exert deck in my opinion.

Atroxreaper I have been considering Gust Walker for sure, as well as Radiant DestinyI will keep playtesting. Purple_Mage Will also test your 50/50 suggestion. And thanks for ur input Booth!

Argy Yeah What i was thinking was more in the direction of a merfolk/dino+ Arcane Adaptation or merfolk+pirates. No idea if i could make anything out of IT. Just love the card.

Flooremoji thanks a lot! I must give a lot of credit to Argy tho.

Might suggest a player of Radiant Destiny naming humans is decent and once you have the city's blessing vigilance is very solid with your exert creatures. Also don't forget just how little enchantment hate is in the format most decks can't deal with it. I'd say Gust Walker would be solid as well here. 2 mana flyer with active radiant destiny suddenly beats as a 4/4. Might consider Baffling End as removal that gets you a step closer to your city's blessing.

You are probably right to keep the Standard Bearer in your meta.Thinking about it the Cavalry Pegasus would probably go into the deck instead of 2x Gust Walkerssince it provides Flying wich is redundant with Gust Walkers exert ability, but im not intirely sure if the Cavalry Pegasus is worth going down this great threat. However, if your meta has alot of Mono-B Control in it it could go in instead of Armadillo Cloak or Bonds of Faith since these beiing auras trade 1 for 2 vs a removal spell when used on an allied creature.Could be worth a try!

Seconding the thoughts that the deck right now is too all over the place. The cards I'd include as full playsets are:

And then some number of: