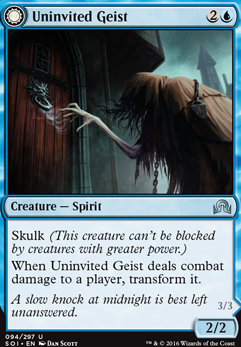 For turn 1 plays, I think something like Guard Duty or Oppressive Rays would be good.

First, Propaganda is not modern legal.

In testing my Enduring Ideal deck, I found Perplexing Chimera has been an all star: it gives the opponent a useless 3/3 in exchange for any spell that might get them out of the lock, but that's a totally different style of deck. I think for your style deck, you would probably want Hall of Heliod's Generosity , and Lunar Force to lock them down while you mill them out with your Psychic Corrosion . You might also want Sphinx's Tutelage , Jace's Erasure or Memory Erosion to speed it up.

Also, find space for Honden of Seeing Winds and Honden of Cleansing Fire , at least one each.

facepalm I supposed I should have expected my snark to bring Karmic Justice right back to me, eh? haha Give enough snark, you'll eventually get it back! XD Touche!

Running Auras with Sram and Spiritdancer would definitely help since you'd be able to trigger Mesa Enchantress as well since all Auras are Enchantments; and it looks like you've found most of the powerhouse Auras.

If you're looking for more lockdown Auras, I've always liked Prison Term, Suppression Bonds and Faith's Fetters since they take them out of combat AND turn off their activated abilities (plus the latter two can hit things other than creatures).

Buffing Auras Holy Mantle and Angelic Destiny or other anti-combat Auras like Pacifism, Guard Duty, Temporal Isolation, Journey to Nowhere can also be niche, but useful in the right meta.

Sigarda's Aid can help your Auras gain Flash. While Authority of the Consuls gains you life and slows down opponent's using creatures (especially hasty ones). Path of Bravery can also be an Anthem effect and gains you life.

Open the Armory and Three Dreams are useful for finding Auras in your deck.

wow this deck has gotten a lot better, I especially dig the Mana Chains. The transmute tech looks really good too. Here's my feedback:

-5 Tranquil Cove seems a bit too many lol, but in general you have a lot of tap-lands, so I would consider running Bant Panorama or maybe Shimmering Grotto so that you can hit Fertile Ground. In terms of fixing, I also think Abundant Growth could be good. -you have a ton of removal which is good but also maybe you could lean more heavily on your circles of protection. You could run cheaper removal like Guard Duty or Oppressive Rays (good against Arbor elf)

-I think Quiet Disrepair should be mainboard as a win-con against aggro, otherwise they can just save up and then burn you out.

-I like the wincon a lot. Maybe Jace's Erasure could be good as well, especially because it's tutorable