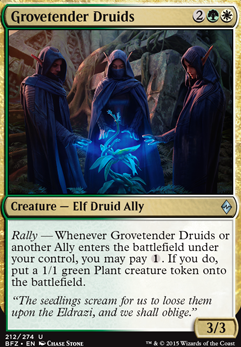 Rally â Whenever Grovetender Druids or another Ally enters the battlefield under your control, you may pay .If you do, put a 1/1 green Plant creature token onto the battlefield. 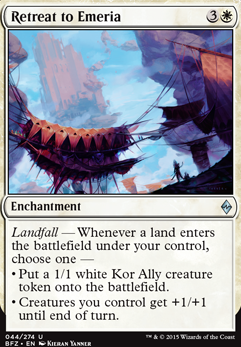 We Need More Tokens
by MewMewMTG 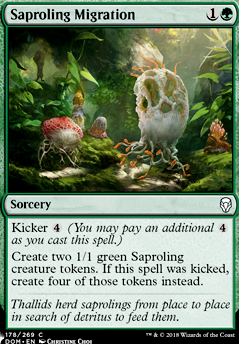 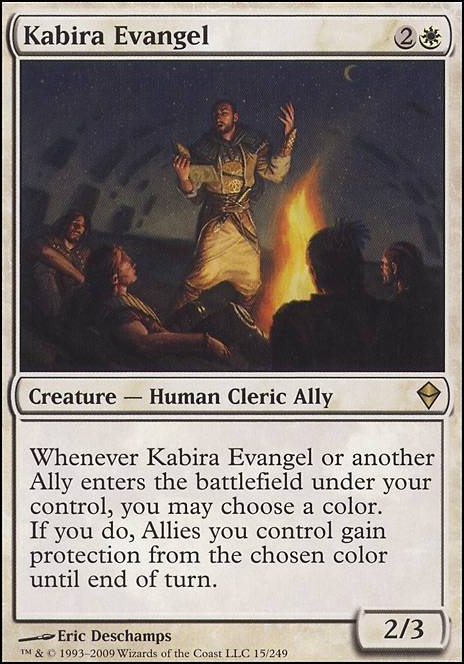 Hi, I'm an ally player (I have an EDH and 2 modern decks). I would get rid of Tajuru Archer, anything with cohort, Nimana Sell-Sword, Grovetender Druids, Bojuka Brigand, and a few more things that don't contribute to winning and definitely put in Tajuru Warcaller and Ondu Cleric. Unlike Slivers and Elves play style, Allies want to get out of hand extremely quickly and without anybody noticing. That is the whole purpose of enter the battlefield effects lasting only one turn. Cohort is far too slow and so are +1/+1 counters on 4 mana bodies.

I really want to like Grovetender Druids, but because of the cost of its ability, I can't. Also, you can easily end games with Resolute Blademaster.

If you have Deadeye Navigator soulbound to Harabaz Druid and control Chasm Guide, you can generate an infinite amount of

mana and have an infinite amount of ETB triggers. It can also be very useful soulbound to General Tazri, allowing you to search for an ally for a measly

. (If the Navigator is too expensive, you can use Nephalia Smuggler, but to lesser effect). Since you don't really have anything to make land creatures, Halimar Tidecaller is really just kind of useless here in my opinion.

Hagra Diabolist may not let you gain life, but you can easily end games with it.

I know that it is a very minor suggestion, but I think that the Lens is better because it has the same second ability and adds mana for free with its first

It may be worth a little more, but Chromatic Lantern will fix any color-related mana problems with ease

Mind Control is a very useful card, but I think that Conspiracy allows you to do a lot more with the Ally tribal theme, letting you tutor for Deadeye Navigator with Tazri and even being part of the infamous Turntimber Ranger combo. If that is worth too much, you can use Xenograft instead, but to lesser effect.

Though it may cost more mana, creature removal is always nice

This part is up to you, and that is other forms of removal that do not involve ETB effects, such as Return to Dust, Ironwright's Cleansing, Devout Chaplain, Revoke Existence, Ruinous Path, Hero's Downfall, Murder, Doom Blade, Smelt, Demolish, Fiery Confluence, Consign to Dust, Creeping Mold, Deconstruct, Fade into Antiquity, etc. I have a Brago, King Eternal (who would go nicely in this deck as well) commander deck, and I have played against opponents who play things like Torpor Orb and Hushwing Gryff, and it is living hell when your deck relies on ETB effects and that comes into play. I do not know what people in your group usually play, but if I were your opponent and heard that you were making an ally deck, I would definitely include at least Torpor Orb, so I would be sure to include some form of removal to deal with these threats.

I hope that I helped, and good luck!

If you don't mind using infinite combo loops you could use Grovetender Druids + Conspiracy (naming Ally) + any infinite mana source = infinite Ally tokens and infinite triggers from whatever allies you have out at the time.

Im gonna assume that this is one of the decks you were talking about. I want start off by saying that i love it, so a definite plus one. There is some room for serious improvement so buckle up, because I am about to go in. Dont take anything personally, and keep in mind this is advice and not demand, so take it as you want.

First things first, I see alot of high cost stuff, but only 20 lands. Inside of those 20, i dont see any fetchable duals, and 8 basics. This will hurt in modern, where the games are faster, and having to fetch single color sucks. This is the landbase i would shoot for: 4 Windswept Heath, 4 Temple Garden, 4 Sunpetal Grove, 4 Ally Encampment 3 plains, 3 forests. This 22 lands.

The next thing is that i see alot of tribal pump. Alot of it. You dont need to have door of destinies in here, and obelisk of urd should definitely not be a 4 of. Way to situational to cast cheap in a format full of removal, believe me. I love the claws, but equipments in a non equipment based strategy should be limited. The artifact list should look like this: 2 claws, 2 urds. Thus should be sufficient enough tribal pump, and should be more than enough for over kill.

No removal? You are playing white and dont have a playset of Path to Exile? Thats a must have.

You could try Dromoka's Command to for the solidity and versatility of the card.

Now on to the creatures. I see that you have a love for each of those creatures, and wanted each one to be evenly dispersed, which i assume is the reason for each one to be a 3 of. Some of those creatures are much much slower and less relevant than others, but i do like the inclusion of all but the warcaller of them, so i will just fix the numbers. 4 hada freeblade, 4 warleader, 4 druid, 2 evangel, 2 Grovetender Druids,2 paladin, 2 ranger.

Maybe, if you want lifelink, add in 2 Behemoth Sledge to the mix. Solid protect a creature, force pressure, and gain life.

Hope this helps. Sorry for the extremely long comment. Love veteran warleader, so i may do something similar in the future. Im actually gonna post up the list i just made for you to playtest and pricecheck. Keep up the good work!

I would cut out these Creatures, most of them aren't worth a spot.

Stone Haven Outfitter, you run just to little equipments to get a benefit out of him.
Greenweaver Druid, with 38 lands mana problems shouldn't be there. (I'm running 37 and have 0 problems)
Grovetender Druids, just too weak, paying 1 mana for a plant wtf is this
Hada Freeblade, It's EDH not an Ally Aggro deck, it isn't so useful
Kazandu Blademaster same as for hada
Turntimber Basilisk isn't good enough for a tribal deck, you could drop a 3mana Ally instead of him..

Archetype of Endurance, This card is savage :D

I would put those in:
Agadeem Occultist, wait for the next card
Halimar Excavator, Allies stand for reaching a goal together, heck, imagin these two together :D
Turntimber Ranger, is way better as the plant producer
Kazuul Warlord, Yes oh yes, counters on every single Ally
Beastcaller Savant, is the other mana dork Allies got
Brago, King Eternal, since you are running some non Allies this one will boost your team immensely

Maybe Collected Company isn't the right card for this built, the chance of hitting a 3 or less mana creature isn't big enough.

Ghostway is the better Ghostly Flicker and it will be even better than Cloudshift. With the mana dorks and the time EDH gives, you will easily have the 3 mana left for this instant.

Maybe something like Harsh Mercy and Rite of Replication will enhance your deck?

2 very good Planeswalker are: Gideon, Ally of Zendikar and Venser, the Sojourner

Aura Shards, if you have to deal with strong artifacts o enchantments
Legion's Initiative to trigger you whole squad
Call to the Kindred to bring in an extra Ally per turn
Conspiracy to make every creature an Ally, every creature could be tutored with Tazri
Mirari's Wake might be a bit faster than Zendikar Resurgent, both have their advantages.

I hope I could give you some ideas. Pls take a look at my Ally EDH deck, you might find some other interesting things there! :-)

All in all General Tazri is a good commander, especially when you blink her in and out. The pieces for Allies EDH is pretty cheap as well, barring a few cards.

Also think there is a combo between Grovetender Druids, Ashnod's Altar and Conspiracy for infinite Ally triggers and "Ally" tokens or something like that. Well best of luck finding the pieces you need mate