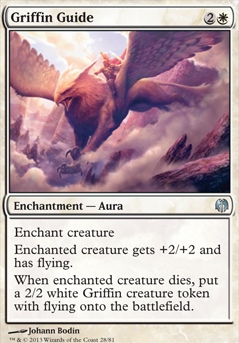 Enchanted creature gets +2/+2 and has flying.

When enchanted creature is put into a graveyard, put a 2/2 white Griffin creature token with flying into play.

Its Only Fog Bro
by Ryanturano 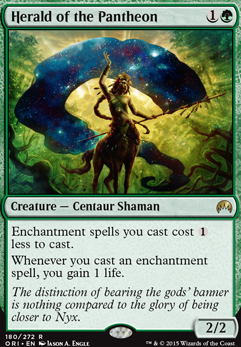 Beware that Umbra Mystic has anti-synergy with both Angelic Destiny and Griffin Guide. I recommend playing at least 24 lands with this many 4-drops.

Geist-Honored Monk and Crusader of Odric count / equal to creatures, and that ability can be granted with Pennon Blade as well. Seraph of the Masses has a pretty high casting cost for it's ability, but flying can be gotten cheaper with Auras and Equipment. Griffin Guide for instance. A good Creature for Auras is Brood Keeper for generating Tokens. Conviction if you want to go that route.

Keep Lightning Bolt and + 2 Raise the Alarm and -2 Krenko's Command. Maybe invest in Isochron Scepter and focus on Instants. Boros Charm for damage and Dawn Charm for utility so you can choose different modes for different situations.

Boros Charm and Isochron Scepter come with a price tag but everything else is reasonable.

Uril is pretty dumb. Had Griffin Guide, Armadillo Cloak, Flickerform, Spirit Loop, Spirit Mantle, and Felidar Umbra on him. So he was a 22/22 flying, hexproof, pro creatures with triple lifelink on him. I gained 66 life each time he hit because Cloak and Loop are triggered abilities, not actual lifelink.

Also, sorry to be Debby Downer, but cards like Murder Investigation and Griffin Guide do not trigger unless you let Uril go to the graveyard instead of returning to the command zone. For rules purposes, the word "die(s)" translates to "go(es) to the graveyard from play."

Nice, I'm building this guy as well - you've given me some great ideas. I'd maybe suggest Flickering Ward or Spirit Loop so when Temmet dies you can keep equipping him or his token. Griffin Guideseems to have some synergy with Temmet too. Wake the Reflections can populate your best token.

Super Secret tech - Spirit Mirror. You're already running Pure Reflection, so destroy your opponents reflections, and create your own tokens. It acts like a weaker bitterblossom too, and you can block with the Reflection tokens since you get a new one each turn

Asha's Favor is there for Vigilance, the flying and first strike are added bonuses, I might replace Asha's Favor with Triclopean Sight tho, or maybe even Daybreak Coronet, I really want that Vigilance to massively benefit from those Odric triggers. Hmm, I do like Griffin Guide tho, but the Nimbus Wings are there so I can get early flier buffs.