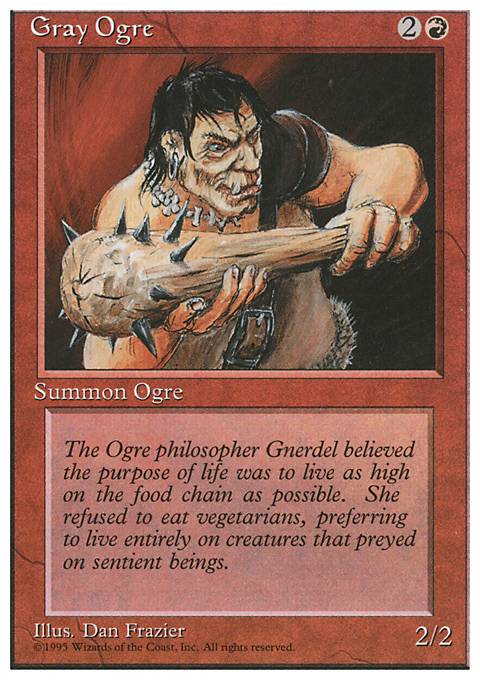 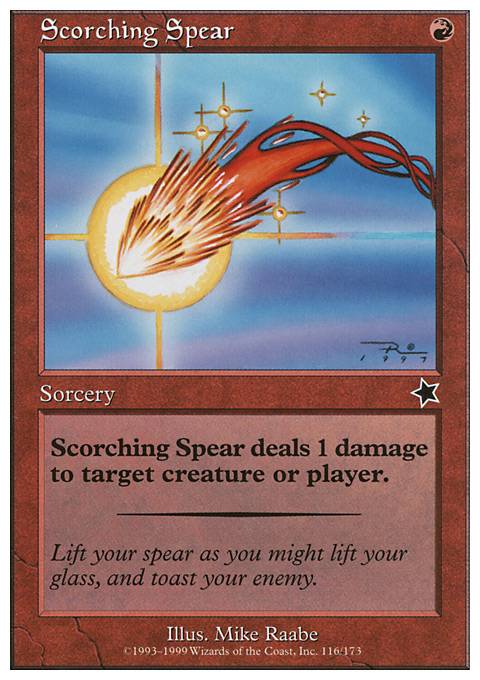 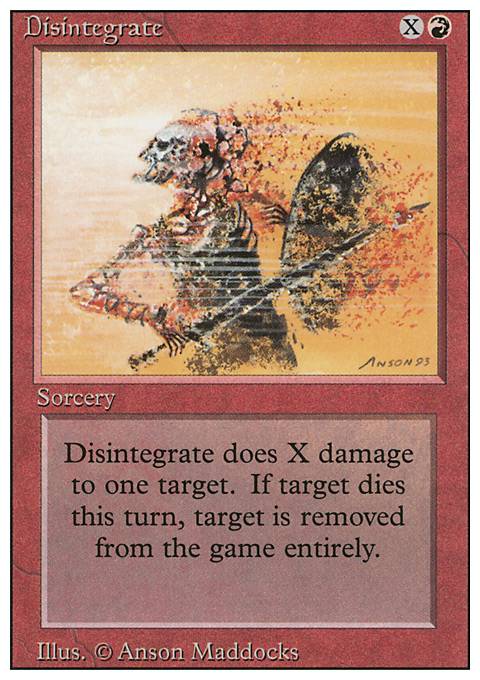 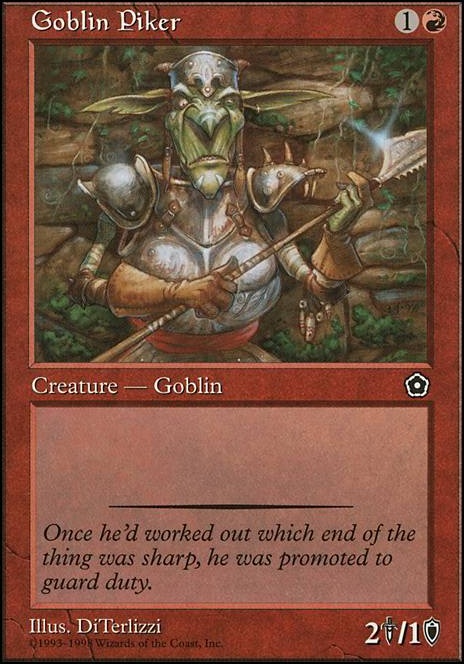 Who's card is it anyways?
by Eirikr-Batman

Gidgetimer on Eldrazi Monument and obliterate

At the moment that Obliterate resolved Gray Ogre had indestructible. He will not be destroyed.

Jmmtthws on Eldrazi Monument and obliterate

I have Eldrazi Monument in the battlefield and a Gray Ogre. I cast Obliterate. What a happens to gray ogre?

AshenONe Apologies for the late reply, I was away for the holidays.

I'd probably just play walking ballista. After you draw your deck, get Chulane out of play with Curio or similar (or even path or swords if necessary), then you can make mana with some combination of Earthcraft, Intruder Alarm, Village Bellringer etc.

If you want to be able to win post combat or with Finale exiled, I'd probably recommend Walking Ballista. It's a hard wincon, it has marginal utility as an anti-combo rattlesnake, and can start Chulane chains as a 0-cost creature.

Alternately, if you want your life to be simple, Labman should do the job, it's just that I don't like having Gray Ogre in my decks :P

Jhed1 on [Community Discussion]: What makes a ...

I'll state my answers in the order that questions were asked.

I've played a lot of dralnu and you have waay too many ways to protect him. Honestly in my last list didn't run any of the equipment like lightning greaves and stuff because they're just useless without dralnu and extra copies are redundant, it's usually just better to either counter the burn or just kill dralnu in response. Niv-Mizzet shouldn't really be an issue for dralnu since they ping him one point at a time so you can just sac him if you don't have anything you don't care about. I mean I guess if you're meta is just mono red decks it's reasonable to have that much protection but otherwise it's just a waste of space. I would cut all of them except pemmin's aura and maybe swiftfoot boots since the rest can put you in a bad place against a boseiju'd blasphemous act (except magebane armor, but that card is way too expensive).

The deck seems really light on actual card advantage generating spells; there are only 5 or so and even those ones only get you up a card or two. Windfall, Whispering Madness, Fact or Fiction, Epiphany at the Drownyard and Treasure Cruise are all very solid cards.

Wydwyn is not really interchangable with dralnu at all, she favours tempo-control decks that usually kill with hatred or something, she's still weak to a lot of the same match ups as dralnu and if the plan when playing her is just to find dralnu asap, then isn't it just better to play dralnu as the commander.

I actually don't know how you win, for real, you have an entire section dedicated to it but all the win cons seem to suck, Ashiok does nothing and why are you milling your opponents and yet still playing Lab Man for a natural deck out? Lab Man himself is actually just terribly unplayable, you're playing a Gray Ogre, Gray Ogre is a bad card, you won't win with this because A) You have so little self-mill and card draw that you'd run out of answers before your opponents ran out of threats especially in a multiplayer game since you only have 4 board wipes and no way to lock people down. B) Because you run beacon of unrest and C) because it's a Gray Ogre probably the easiest thing to remove in magic. Jace is ok but planeswalkers are generally pretty inconsistent at ultimating. Stealing your opponents creatures is not really a win-con especially given that you aren't stealing more than 2-3 a game. Talrand - now I might be underestimating how many spells you play in a game but a deck with an average cmc of 3, 35 spells and only 8 counterspells isn't going to get a lot of value out of Talrand. Ulamog dies astoundingly easily and yet is the closest thing to a win con this deck has.

How to make dralnu a true beast: Locks, not infinite combos so much because at that point he's just a bad Oona, Queen of the Fae but things like Knowledge Pool + Arcane Laboratory are what make him nuts (you can flash stuff back but nobody can cast spells from hand). Playing Animate Dead without Kederekt Leviathan in UB seems almost always incorrect. As I said Time Walk effects are insane. Mindlock Orb + Maralen of the Mornsong can be good but requires a little more set up. Zur's Weirding is sweet though, I totally forgot about that card last time I built dralnu.

More tutors would probably be good, they tutor twice so ya. Entomb is a bit expensive but is actually just the most powerful card in dralnu, like absolutely busted. 1 mana instant Demonic Tutor but better because you can bin Kederekt Leviathan.

Dimir Cluestone just costs too much mana to be good, in 2 colours you shouldn't need the fixing and so Mind Stone works much better.

Riptide Laboratory can bounce dralnu and is really all the protection he needs.

I think in your discussion of vanilla p/t you forget to mention a fairly important aspect - that being power creep.

Creatures are slowly becoming better and better as years go by. Alpha had Scathe Zombies and Gray Ogre, now we get Walking Corpse and Falkenrath Reaver. Does being an uncommon factor into the extra point of stats that Kalonian Tusker gets? Probably. But Tusker is also a much more recent card than either Elvish Warrior or Gnarled Mass, which explains why it's more pushed. A more apt comparison for Gnarled Mass would be Watchwolf - uncommon, from the same period, but also in two colors. Mass saw constructed play in its time if I recall correctly. These days even 3/3 for 2 is not good enough for standard without significant upside or good synergy.

Re: Rarity as a balancing factor. I think it's actually perfectly fine for rarity to to be used that way because it allows to point different cards at different formats. I agree with you that in a world in which people routinely use websites to acquire their cards rarity is a non-factor when it comes to constructed formats. That is fine. Maybe 5% or 10% of all cards in a format are intended for constructed play, and those that would completely warp a limited deck or be useless because o how much synergy they require should be put at rare or mythic which largely keeps them out of most drafts and sealed pools and keeps the limited environment balanced.

Basically I think the rarity symbol on a card is irrelevant unless you are viewing the card in the context of Limited play. And in draft, it makes perfect sense for uncommons to be a bit more pushed - it's a way to set the average power level of decks. Cards that are aimed at constructed play often have a power level that is problematic for limited, so putting them at rares or mythics make sense. You don't want every other draft deck to have a titan in it.

Like Verbatiam said, you should have at a maximum 60 cards in your deck. To help you get there, let's start by removing the worst cards.

One thing you will need to learn to build a strong deck is to evaluate cards and cut off the weaker ones. A rule of thumb is that any creature card with a power and a thoughness lower than its mana cost needs to have good abilities to be worth putting in a deck. For example, no one runs Gray Ogres, since they are garbage, but some decks might use Gigantomancer, a 1/1 for 8 mana, for its incredible ability.

The best way to evaluate cards is by playing them, and so it is in games that you will notice which cards you should cut from your deck.

I hope this will be helpful to you and that you will have a blast playing Magic!