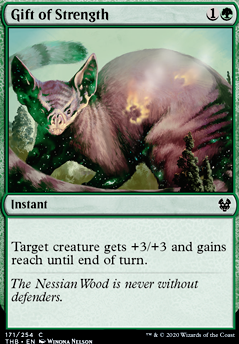 Target creature gets +3/+3 and gains reach until end of turn. 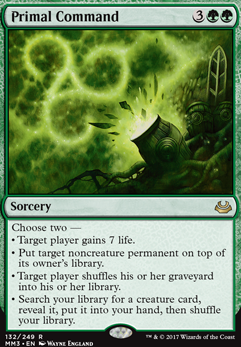 Of the Forest
by BlazedWolf42

I would add more enchantments.

Possible additions: Angelic Gift is flying and card draw. All That Glitters for making your creatures larger. Banishing Light for removal. Season of Growth for scry and card draw.

I question the 3x deckbuilding choices; generally, if you want to be sure you see a card in your opening hand, you play 4, and if you want to see it once a game you play 3. So for Skirk Prospector , Legion Warboss , and Goblin Instigator I would really recommend 4x each! Gift of Strength is an underwhelming card (in fact, Giant Growth is back in standard I believe and is strictly better) and I don't think you need pump spells, so I would cut those for the extra 1-ofs your core cards.

I think my cats will be the ones giving me life needed for Ajani's Pridemate, as they have lifelink, but I could be wrong. I'll probably do as you say and get rid of one Heroes' Reunion and a few Gift of Strength and even a few of Blossoming Defense and play instead with Birds of Paradise and Lotus Cobra, rather than add more lands. I already have 7x Forest 8x Plains 4x Sunpetal Grove. Don't you think that's enough lands? 19 in total. With Birds of Paradise and Lotus Cobra, if I draw them, they would allow me to gain lands much faster. I would useAjani's Welcome but I don't know how many cat cards i'll be casting. Do you think I'll have more than 7 creatures on the battlefield on the fourth turn? The whole reason I'm thinking of using birds of paradise and lotus cobra is so that early in the game I'll be able to play Anointed Procession and eternalize Adorned Pouncer, play Leonin Warleader, as well as Regal Caracal. If I can't get enough cats early in the game, I'll be twiddling my thumbs until I get enough mana, as Regal Caracal and Leonin Warleader are two main cat givers, and Pride Sovereign would be pointless until the 4th turn if I don't have these mana rampers. If I draw Sacred Cat at any time in the game, the most I can have on the battlefield is 4 until I can mummify them, which is the whole point of Anointed Procession. Anointed Procession is the main card that this whole deck depends upon.

Giant Growth over Gift of Strength

Unclaimed Territory and Cavern of Souls.

Vraska, Scheming Gorgon doesn't work in standard simply for the fact that it's 6 mana and takes 4 turns for you to use it's ultimate. But since you want to use it, ill give some suggestions.

Get out of blue as you are only using it for Wall of Mist, Open into Wonder, Cancel and Unwind. It's not strong enough to be splashing blue. That gives you 12 slots to fill.

Old-Growth Dryads is a terrible card. Yes its 3/3 for 2, but it ramps your opponents and helps them get ahead. Ramunap Hydra is a cool card, but is reliant on how your deck plays. Some deserts hurt you simply because they enter tapped and set you back a turn. Song of Freyalise although ramps you, it's slow in this deck and slow in the meta. I would cut all 3 cards for other cards that speed you up and get to end game better.

Gift of Strength is a worse Blossoming Defense. Defense is more versatile and stops opponents from using spot removal on your key creatures.

I realize this is a complete overhaul but I believe my suggestions will help. Llanowar Elves does for you, what you would be doing for your opponents with Old-Growth Dryads. It ramps and helps you get out a kicked Untamed Kavu or Vraska, Scheming Gorgon quicker. 2 Druid of the Cowl to help get to 6 mana quicker.

I'm suggesting tokens/saprolings because of the ultimate Vraska, Scheming Gorgon has. It adds chump blockers to save Vraska, and offers a go wide strategy. Slimefoot, the Stowaway helps you add value on your little guys dying, and adds a mana sink if you have no play. Saproling Migration adds a turn 2 option and has kicker to make 4 tokens if you need it. Spore Swarm just adds more creature count.

I'm leaving 1 Song of Freyalise as it does ramp you up, but isn't fast enough to rely on. Its a win more card in my head. Only helps when you are winning games but is dead when you aren't

Narnam Renegade and Gifted Aetherborn are two powerful creatures that offer some defensive advantage. Running a playset of both improves odds of the cards showing up most 75% of the games.

If you want to stay in blue. Opt for cheap draw. Omenspeaker over Wall of Mist. Aether Tunnel or Ghostform over Open Into Wonder depending on what you want more. Cut Unwind for Opt and switch Cancel with 2 Negate and 1 Essence Scatter.

Ravenous Chupacabra is also another card you should consider.

Freezingfist thank you for your suggestions, i've included Gift of Strength cause i've just 2 creatures with fly, it could be a card for the sideboard maybe.so you're suggesting me to take off the big ones instead for example the fourth forrunner or the third and the fourth ripjaw, however small dino that i could play fast right?