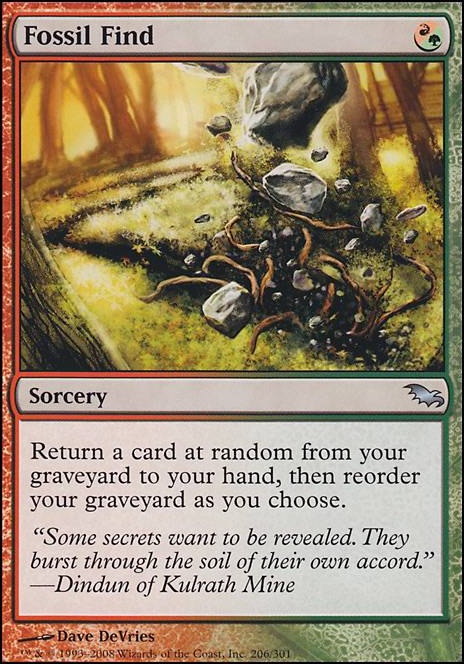 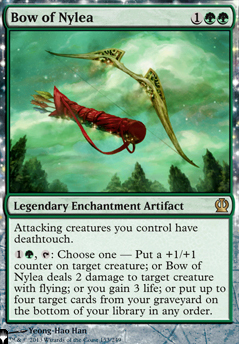 legendofa on Cards that care about graveyard ...

Fossil Find is, to my knowledge, the last card that references graveyard order, and the only Modern-legal one.

I tried something like this built around Shrouded Lore and Fossil Find / Nettle Sentinel . It never really clicked together in the way I wanted though- I hope you find a way to make it all work.

Manamorphose and Fossil Find are pretty spectacular if you aren't running fetches. Intangible Virtue will likely function better than Cavalcade of Calamity

lagotripha: I'm just not a fan of the random clause on Fossil Find . Since I am playing fetches, it feels like the chances of getting something I want are pretty low.

Weird card I've been testing in Boros heromancer- Fossil Find . Since I'm not pulling fetches back out of my yard, I can recover either hero/mancer or manamorphose type effects fairly consistantly, upping the spell count a lot and offering some resiliency. Thoughts?

This looks like a deck that wants Gemstone Caverns mainboard, along with Mirrorpool.

Heck, a full Ceaseless Searblades/Lavaclaw Reaches back up plan isn't too awful.

Any thought on cutting the ritual plan to become a 'purer' creature-combo deck? It should build some resilience to disruption. Burning-Tree Emissary, Geosurge, Cloudstone Curio, Priest of Urabrask and so forth? It gives a lot more solid a back up plan than 'draw rituals and not combo pieces'.

Alternately, you could look at value red 3 drops so that the rituals do things without the combo in hand- I'm a fan of Goblin Rabblemaster turn 1 off a guide and ritual.

You can run Fossil Find so that any two you have in hand with a graveyard with 1 card or less in it makes infinite storm with 3 mana, and it can also help recover pieces in a pinch. I've used it in Nettle Sentinel/Blistercoil Weird decks before, although the mana generation is a little different there. A Paradise Mantle backup isn't really on the table here- I'd look at cutting the rituals for things like Expedite or Crimson Wisps if you go that direction, but that combo finds it tricky if it draws too many lands.

I'm not sure what your feelings on combos are, but Aggravated Assault and Hellkite Charger both go infinite with Radha and enough creatures. I think the deck could also use a couple more early drops to generate mana with Radha. Lotus Cobra seems neat for its ability to generate mana on its own and with Radha. I also kind of like Nest Invader for this purpose.

Some things that I'm not sold on: Dragon Arch with only 12 targets feels like it'll be pretty dead a lot of the time. Fossil Find, while a sweet card, feels like most of the time won't get you back something relevant for the current situation. I think your Isochron Scepter package is sweet, but am not sure if 5 targets is enough to justify it. It feels like a lot of the time you'll have the scepter sitting in your hand with no target. That being said, if you can get any of those targets on it, it should be a pretty hilarious game. Rosheen Meanderer also feels kind of bad with only 3 x-spells to cast.

Overall, it's a sweet deck with lots of cool and janky choices, but I think you may be trying to go in too many directions with it. Try to pick a couple key things you want the deck to do, and cut the other packages to focus on the chosen one.