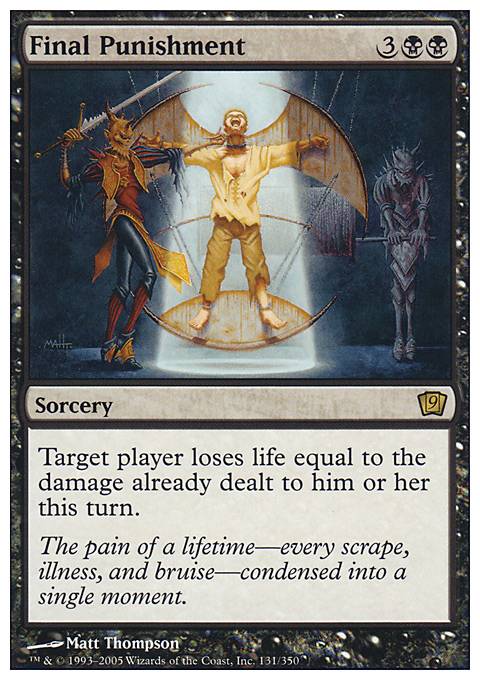 Target player loses life equal to the damage already dealt to him or her this turn.

Give a little, take less
by SilentPlague 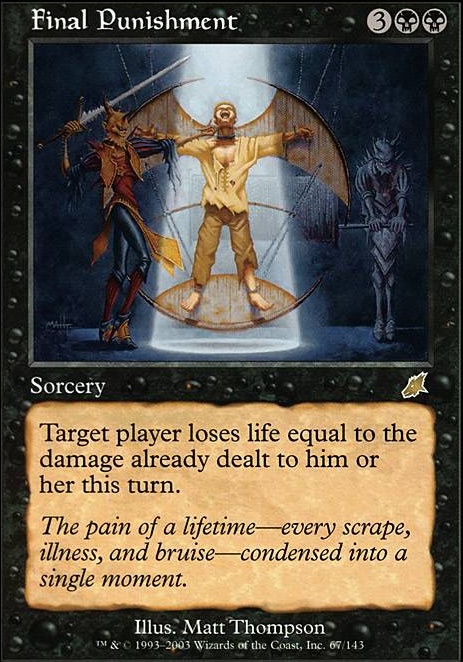 Ur- Dragon But It's Actually Kinda Jund
by BigIronMando

The Good, the Odd, & the Ugly (3 Commanders)
by BaceJeleren

Thank you so much for noticing ive-been-degaussed. I replaced Final Punishment with Erebos, God of the Dead.

After a few months of trading and acquiring, here are the changes to the deck:

In - Bloodline Necromancer, Bishop of the Bloodstained, Deathless Ancient, Kindred Dominance, Patron of the Vein, and Sanctum Seeker

Not much of a gameplan change, just some upgrades and trying new folk out from C17 and Ixalan

Hey there! Not a bad deck at all. It seems like you want to win games by hitting your opponent with creatures while gaining life and killing their things. There's only a couple recommendations I would make in this case.

First thing first, you have a lot of high mana cost cards in your deck. This is great, but this also means you'll want more mana. With 6 cards that cost 6-or-more mana, you're going to want at least 22-23 lands. This brings me to point two...

When looking to make your deck better, you want to look for what cards in your deck aren't working towards your deck's goal. For example, you have quite a few cards that gain you life in the deck. So why, might I ask, do you have Repay in Kind? If you're gaining life, odds are you're going to be ahead on life anyways, so you're hurting yourself. On the other hand, if you aren't ahead on life, you'll probably be dead by the time you have the mana to play this card!

Another example of a card that doesn't do enough for your deck is Final Punishment. This card is a really strong finisher. 5 mana to double your damage from all sources this turn is very strong, but does it help you win in this deck? Are you going to be dealing that much damage to your opponent in one turn, or are you going to use your life advantage to pick apart your opponent at your convenience?

Just a couple things to think about. As a casual deck, this is already pretty good and I wish you luck, whether you're playing with vampires or paladins :)

Also for some possible late game strategies, Grave Betrayal, and/or Grave Pact to go with your Shriekmaw effects.

Also some cards to consider for your unearth/etb from GY effects:

Final Punishment is a fun card to play with Raving Dead and also with your commanders ability it's easy to cheat in big creatures. Youu can use cards like Entomb or Buried Alive to get them in the graveyard and bring them back with Sheoldred or Reanimate. Use that to cheat in something like Lord of the Void

Thanks for the suggestions. Final Punishment and Furnace of Rath are definitely great cards that I hadn't thought of yet and I'll be adding those to the deck asap.
Maga, Traitor to Mortals and Cryptborn Horror seem very interesting as well, but I'm going to have to figure out which cards they could replace in the deck first.
Lastly the Blightsteel Colossus and old Eldrazi would be amazing in this deck and I've definitely looked into those, but the decision to keep those out is really just because of my budget. I'm thinking of building the deck as cheap as possible first and then slowly replacing some cards with bigger more expensive ones, and I'll definitely be adding Blightsteel Colossus then.
Thanks!