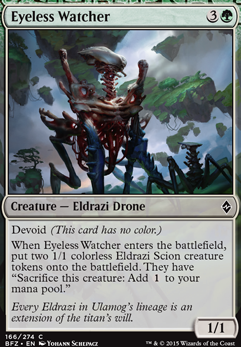 When Eyeless Watcher enters the battlefield, put two 1/1 colorless Eldrazi Scion creature tokens onto the battlefield. They have "Sacrifice this creature: add to your mana pool." 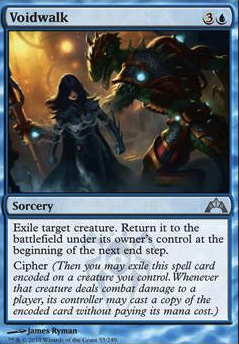 Eldrazi for Days
by Swim_ish Knight of Autumn is def on my radar!

I've had the same thoughts on Acidic Slime , but i'm drawn to the idea of a a t3 acidic slime drop with double proc of land-destruction.

The thing with Eyeless Watcher is that it combos with Panharmonicon and Eldrazi Displacer . And then i put in 4 stirrings for consistency, so to speak. The altertive would be to, first of all, remove 4 stirrings, Displacer+watcher and sideboard the slimes, giving me a 4+2+1+2 = 9 open card slots.

One could go for Eternal Witness x2, Knight of Autumn x3-4? and Path to Exile x3?

I definitely second Knight of Autumn as a good choice, and I'd also recommend running some number of Path to Exile s. Eyeless Watcher doesn't seem that great to me - it's way too slow. 4 Ancient Stirrings might also be a bit too many (though finding both Panharmonicon and Epochrasite is cute), and 2 Acidic Slime might be too much as well. Good luck with your deck, though!

Forgot to mention Crystalline Crawler and Phyrexian Altar, and Mana Reflection to get the most out of those cards and Ashnod's. Ant Queen and Sacred Mesa are probably the best repeatable token generators in these colors. Twilight Drover is also great if you have Cathars' Crusade. Eldrazi Displacer works well with Brood Monitor and Eyeless Watcher to generate tokens.

There are new decks to discuss up in the "Decks to Debate" section. Please take a look and give your thoughts.

@rumpy Thanks again for the deck, I think it has many good cards, in fact, I took a couple that I liked such as Pounce and Ambuscade. Although my deck is geared towards casual play I feel it has a more solid game plan. My deck consistently can abuse creatures that Rampant Growth when they ETB as this is the strongest ramp effect on a creature compared to something like Gatecreeper Vine that doesn't ramp. My deck then can deal with problems via my creatures like AEther Adept (very powerful effect to abuse, have as many as possible) and my other interaction spells like Lignify (the removal I liked from your list is soon to be worked in). After establishing myself I proceed to play huge creatures which were carefully chosen to give me a bit of a toolbox depending on the best way to get in for damage (Rancor is an auto-include as it turns your commander into a 2-shot kill with trample). The Peregrine Drake combo fits perfectly well into the deck as a fallback win condition, easily abusing any of my ETB creatures like Elvish Visionary to simply draw my deck or Eyeless Watcher to flood the board. I include a strong ratio of good draw spells and ramp spells as I calculate what those ratios should be for each of my decks. I pack good recursion to get back those beaters. Overall my deck is extremely resilient and has a strong gameplan.

Looking at your deck I can see you are trying to attack with Species Gorger which I don't think is a bad idea as it is decently big. We share a good amount of cards but our paths diverge when you include cards that dont ramp like Gatecreeper Vine and Sylvan Ranger. I feel tutoring lands into play is a much for reliable and resilient option. I'm not particularly a fan of how many token producers you have that only net you one token like Eldrazi Skyspawner and Nest Invader as that isn't particularly a strong effect. I also see some cards that I don't think are effective such as Leonin Bola, Explorer's Scope, Scion Summoner (along with the others that make just one token), Multani's Acolyte, Seal of Primordium (use creature based art/enchant removal since you can abuse it), all could be replaced with better cards.

Even with different game plans I'm still able to critique your list (which I'm very willing to talk more about and help out. I love working with people). Hopefully I've explained how I do in fact have a very solid game plan in my deck. (and thanks for bringing some neat cards to the table for me)

Okay, if you want to run Breaker of Armies, you could also run Eyeless Watcher. Sure it's not great, but sac'ing a vanilla 1/1 for four mana is fan-friggin-tastic. The same rule applies to Eldritch Evolution, It of the Horrid Swarm, and Mockery of Nature.

Ulamog's brood is: Benthic Infiltrator, Conduit of Ruin, Cryptic Cruiser, Drowner of Hope (as it is said in many places that Ulamogs brood moves through water easily.), Eyeless Watcher, Oblivion Sower, Ruination Guide, Vile Aggregate. and Wasteland Strangler (look to the left of the creature and you can see it's mask), I am also fairly certain that Brood Butcher is a part of Ulamogs brood as well.

Kozilek's lineage is: Dimensional Infiltrator, Immobilizer Eldrazi(note the eyes), Slaughter Drone(also has eyes on joints), Stalking Drone, and Walker of the Wastes.

Nest Invader is the only member of Emrakul's brood in the list here.